These Massive Futuristic Gondolas Could One Day Cruise Above Chicago River

RIVER NORTH — Calling themselves "mad messengers" and "two crazy dreamers," a pair of Chicago business leaders proposed major gains to "ignite tourism" as an economic engine Tuesday in a speech to the City Club.

Laurence Geller, head of Geller Capital Partners, and Lou Raizin, founder of Broadway in Chicago, unveiled four years of research on Chicago tourism, including proposals for a what they compared to a high-wire zip line with aerial gondolas running along the Chicago River to Navy Pier, as well as live performances projected onto the back riverside wall of the Civic Opera House.

The gondolas could run as far as Cermak Road to boost visitors to Chinatown, they said.

RELATED: OPERA PROJECTED LIVE ON BACK OF LYRIC BUILDING COULD LIGHT UP CHICAGO RIVER

"We're rogue," Raizin said, in explaining their ambitions, but the two members of the board of the city's Choose Chicago tourism agency also insisted their ideas were feasible.

"This is no pipe dream," Geller said. "We know this is real, very real, and can be done."

Key, they said, was creating an iconic attraction on the order of the London Eye. What they called a "sky line," running down the Chicago River to Navy Pier, would be just that.

Imagine a high-wire with large, multi-person gondolas running down the river to and from Navy Pier and you'll have an idea of their vision.

"This is iconic," Geller said, "and the world requests iconic destinations." 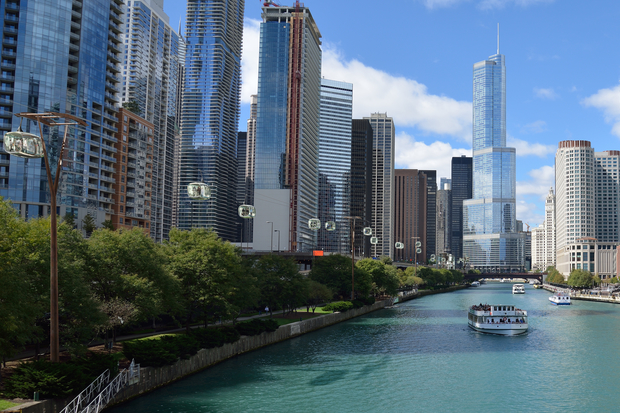 Yet he quickly added, "This is not about enriching the lives and wallets of the 1 percenters," saying, "What benefits tourists benefits all residents of the city and our communities." They talked about attracting tourists to the city and keeping them here.

One method for that, Raizin said, would be "expanding tourism into our neighborhoods in all directions." He specifically proposed greatly enhanced lighting to showcase "Daniel Burnham's emerald necklace," the city's abundant parks.

"Thriving parks serve as an open invitation to get off the beaten path," Raizin added.

He also suggested reviving Jane and Bernie Sahlins' longtime goal to create an international theater festival, on the order of the Edinburgh International Festival, by drawing on the city's neighborhood theater companies.

They also suggested enhancing the Pedway, and improving rail transportation to and from the airports, with Raizin saying, "It can be done, and it will pay for itself."

That was a major theme, as they gave no cost estimates, but suggested innovations like the skyline were simply waiting for someone to invest in a sure moneymaker. Raizin estimated it could be erected in 18 months after logistics and red tape were dealt with, three or four years overall.

Geller called it "a smashing and profitable idea."

Geller said he was inspired by Chicago not making the top 50 in a recent poll of global tourism destinations — behind even Australia's remote Uluru, or Ayers Rock.

"I'm bloody well ashamed," said the British transplant. "Chicago is a world-class city that the majority of the world does not know about.

"We have to change Chicago's old approach to tourism from old guard to vanguard," Geller said. "We're delivering our business community a call to action. ... It's simply not in our DNA to accept mediocrity."

Carrie Fisher's Tale Of Nearly Dying, Then Falling In Love, In Chicago