'Not A Stranger,' A Film Written & Produced In Beverly, Will Debut In June

BEVERLY — The Beverly Arts Center will roll out the red carpet next month for a film written and produced on the Far Southwest Side.

Dennis Foley wrote the screenplay for "Not A Stranger" in January and February of 2015. Originally titled "Old Bob," the film stars James Russo and was shot last summer at locations in Beverly, Morgan Park and suburban Evergreen Park.

"It's about three 12-year-old boys who befriend a down-and-out high school teacher with a dark secret and help him recover his life," said Foley, a Beverly resident. 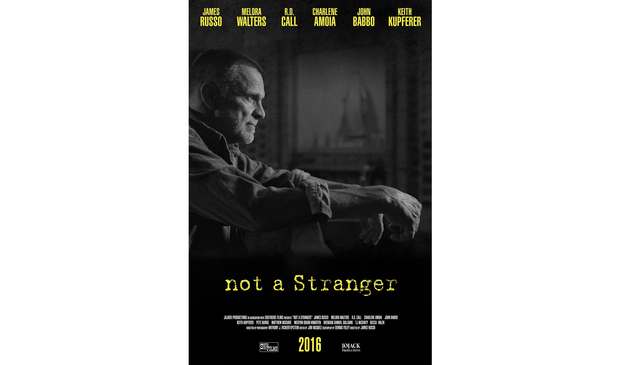 The movie poster for "Not A Stranger" features the film's star, James Russo. The actor plays a character referred to as "Old Bob" by several neighborhood children. He is said to have a dark secret in the film. [DNAinfo/Howard Ludwig]

The film was shot at various locations throughout the area, including Ellie's Cafe in Morgan Park as well as Sutherland Elementary School, Janson's Drive-In and St. Barnabas Church in Beverly. The police station in suburban Evergreen Park also serves as the setting for a prominent scene, Foley said.

Some local actors also landed roles in the movie. Matt McGuire, an eighth-grader at St. Barnabas, plays a significant role in the film. Foley has been a longtime baseball and lacrosse coach in Beverly and knew McGuire through his older brother, who played on a basketball team Foley coached.

Foley said the film begins with the three boys looking for a fourth member of the crew for a pick-up baseball game after one of their buddies ends up grounded. Russo — known as Old Bob — is tapped to fill the vacancy.

Along the way, the English teacher whose real name is Bob Madden shares his love of literacy with the boys. In fact, one of the boys writes a poem in the film called "Not A Stranger." It's based on a similar poem Foley wrote at the time his grandfather died.

The movie is the latest project for Foley, who bounced around the South Side as a boy but said he mostly grew up near St. Sabina Parish in Auburn-Gresham. His first big break came in 2004 with a book called "The Streets & San Man's Guide to Chicago Eats."

Foley wrote the book while in graduate school at Columbia College based on his previous career as an electrician for the city department, recalling all of the favorite places he and the crew would grab lunch.

"Most of what I do is writing. But I didn't venture into the wonderful world of screenwriting for some time," Foley said Monday. 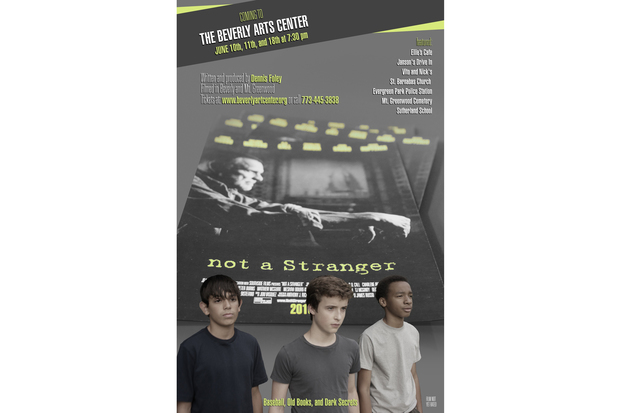 Three boys star in "Not A Stranger," a movie shot in Beverly last summer. It will debut at the Beverly Arts Center on June 10, 11 and 18. [DNAinfo/Howard Ludwig]

His first attempt at screenwriting was a project called "The Blue Circus." Again, Foley relied on his previous career as a city electrician as well as his work for Cook County State's Attorney's Office for the television pilot.

The project won the gold medal for "Best Original TV Pilot" from the Beverly Hills Screenplay Contest in 2013. And though the project never was "picked up," it gave Foley the confidence to write and produce "Not A Stranger."

For the movie, Foley reached out to actors who had historically played supporting roles. The film was shot for just $130,000. So while the project wasn't financially lucrative, it did offer such stars an opportunity to play larger roles.

James Russo was originally slated to play a police officer in the movie, but the director later suggested him for the title role. The Manhattan-born star broke into the business in 1982 playing a convenience store robber in "Fast Times at Ridgemont High."

Russo has gone on to star in movies such as "Donnie Brasco," "Public Enemies," "Beverly Hills Cop" and more. And for Foley's project, Russo even filled in for the director after the original director pulled out of the project just before filming was about to begin.

The project was always a drama with some comedy sprinkled in. But as filming progressed, the story took on a more dramatic feel. This was largely due to Russo's interpretation of the main character, Foley said.

The screenwriter doesn't have any illusions about his first project winning an Academy Award. The film isn't likely to find its way to first-run theaters either, he said.

That said, Foley is proud of the finished project. He believes it represents the neighborhood well and is submitting the movie to various film festivals. If a distributor falls in love with the project, it could possibly end up on a streaming service like Netflix or Hulu.

"I didn't make this thing to see big money come in," he said.