BEVERLY — A crumbling monument in the Dan Ryan Woods erected long ago to honor fallen members of the military is being used as an outdoor toilet stall.

The concrete-and-stone structure on the southeast corner of 87th Street and Western Avenue in Beverly is barely noticeable from the busy intersection.

Shrouded in weeds, the monument is tucked behind a bus stop. An abandoned grocery cart and folding chair were placed nearby on a recent visit, along with scattered napkins that had been used as toilet paper.

A small plaque that reads "Chicago Council of Gold Star Mothers" is all that remains on the monument that appears to have become a pit stop for those waiting for the bus.

Phone calls and emails about the monument to the Washington, D.C.-based American Gold Star Mothers Inc. were not returned. State and city officials listed with the group also did not reply.

This national organization is made up of "mothers who have lost a son or daughter in the service of our country," according to its website.

Local journalist and historian Carol Flynn said she believes the monument is likely tied to the group, which became active after World War I.

Reporter Howard Ludwig on the sad state of the memroial.

Flynn authored a profile on Dan Ryan Sr. for The Beverly Review on March 9. The story delves into the history of the man whose name is attached to the 257-acre forest preserve. The local expressway is named for his son, Dan Ryan Jr.

The story talks about Ryan Sr.'s Irish roots, his time as president of the Cook County Board and his efforts to protect to the Forest Preserves of Cook County. One of the few groups he allowed to erect monuments in the wildlife sanctuary was the Gold Star Mothers, Flynn said.

These bronze markers were placed in forest preserves throughout the county and were often paired with the planting of memorial trees, according to several Tribune articles Flynn referenced from 1919-1921. 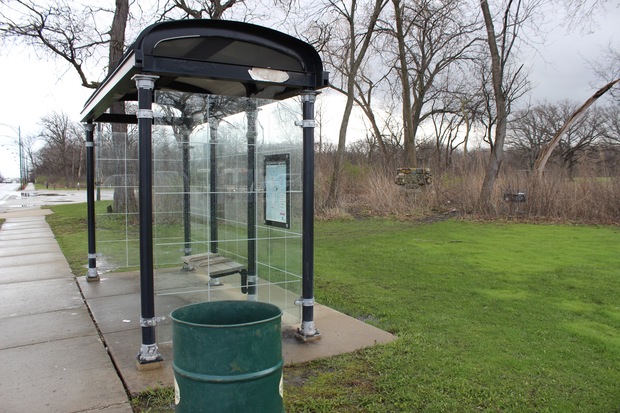 A bus stop on the southeast corner of 87th Street and Western Avenue in Beverly stands just steps away from a monument shrouded by weeds. The concrete-and-stone marker seems to have become a makeshift toilet stall for commuters waiting for the bus. [DNAinfo/Howard Ludwig]

There's no specific mention of the monument on the Far Southwest Side that would have then been placed in the preserve known then as the Beverly Woods or the Beverly Forest Preserve, Flynn said.

That said, the installation of similar memorials seems to coincide with the acquisition of the property now known as the Dan Ryan Woods, said Stacina Stagner, a spokeswoman for the forest preserves.

"It looks like the forest preserves acquired the property near the end of World War I. So our guess is the monument is related to that," Stagner said.

Regardless of its history, the unkempt monument has clearly faded from local memory. Richard Doyle is a past president of the Beverly-based Windy City Veterans Association. A Vietnam veteran, Doyle has organized neighborhood events for area vets events since 1982.

"I have been living on the South Side of Chicago my whole life, and I never knew of a memorial at 87th and Western," Doyle said Tuesday. 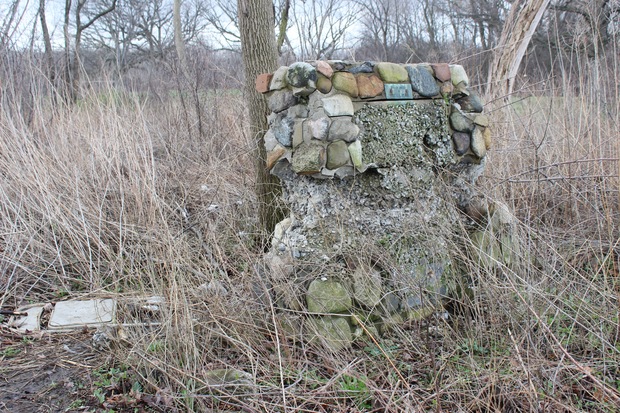 A monument in the Dan Ryan Woods stands shrouded by weeds. An abandoned folding chair and grocery cart stood nearby on a recent visit. The concrete-and-stone structure seems to have become a makeshift toilet stall for commuters waiting for the bus. [DNAinfo/Howard Ludwig]

Edris Hoover, president of the Ridge Historical Society, said her Beverly-based group keeps track of local monuments. The marker at 87th Street and Western Avenue was not on the list. She promised Thursday to make the addition.

Hoover referred to the current condition and use of the monument as "disgraceful." She hoped something might be done to rectify the situation, saying the Dan Ryan Woods are a highlight of the neighborhood.

"It's pretty unique and special," she said of the local forest preserve.