Spain, who stars on several ESPN platforms, will marry Zibung, the creator of the satirical sports site The Heckler, in May. The River North couple met at a charity bowling event hosted by Blackhawks defenseman Brent Seabrook in 2008. Their first date was at a Cubs game, sitting in the bleachers while the North Siders faced the Cardinals on a Friday afternoon in 2009.

Although that date wasn't really a date. Zibung asked Spain to the game via Facebook message as a way to talk shop. Zibung had a different Facebook identity, so Spain didn't even know it was him, just someone who worked at The Heckler.

"It was a good opportunity to meet someone who worked at The Heckler, which I thought was a funny publication," Spain said. "So I had to figure out a way to get out of work."

Her job at the time was at the now-defunct MouthpieceSports.com, and Spain's ditching plan involved asking a friend to the game to help her shoot video of Cubs and Cardinals fans while she asked them trivia questions.

That was fine with Zibung, who didn't think of the game as a date either.

"The worst-case scenario is I would get to know this person who's involved in a lot of cool stuff in the sports media landscape," Zibung said. 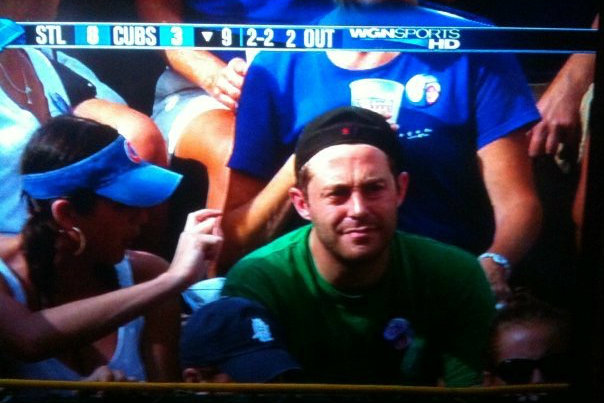 Sarah Spain and Brad Zibung appearing on camera during their first outing together, a Cubs-Cardinals game at Wrigley Field in 2009. They are getting married in May. [WGN]

But a relationship blossomed, and Spain and Zibung have lived in the same River North condo since 2011. They'll be married in front of more than 300 family and friends in Northwest Indiana. Their honeymoon will be in November, coinciding with Zibung's 40th birthday, as they travel to New Zealand and Australia.

Spain has a hectic schedule as a weekend ESPN Radio co-host with Jane McManus and Kate Fagan; writing for ESPNW and producing the "That's What She Said" podcast, among other ESPN duties. She tried to make May less busy with the wedding, but she'll still be traveling to Arkansas, Los Angeles and Bristol, Conn., for work next month.

Zibung's full-time job is as a Bucktown-based Realtor who sells properties throughout Chicago. He created The Heckler, which pokes fun at the Cubs, Sox and other local sports teams, in 2003 and said it's "been an awesome side project."

"And that's how I was able to meet Sarah," he said.

Spain said Zibung's laid-back personality blends nicely with hers, which is more of a "Type A control freak's."

"Brad is just kind of cool with everything and picks his battles with what he truly cares about," Spain said. "It works out really well."

They have a pair of dogs — Fletch, a Australian cattle dog mix from the Anti-Cruelty Society; and Banks, a pitbull/bulldog mix rescued from Peace for Pits. Zibung has become such a fan of that organization that he sells shirts with their logo and donates proceeds to Peace for Pits on The Heckler's website. Both Spain and Zibung said it's unlikely they'll have kids.

They also noted they don't want to leave Chicago. The couple have season tickets to most of the local pro sports teams, are close to their families and love living in the city.

"I have this amazing balance of really loving what I do and loving my life," Spain said. "A lot of people in the industry admit that they're not fans anymore, and I don't want to be like that. ... Staying in Chicago will make me happy and will make Brad happy and will make my family happy. I don't think we need to leave in order to do awesome things together."