"All I hear is, stay in your place N-----," wrote Ald. David Moore (17th) on his Facebook page after the news broke Thursday. 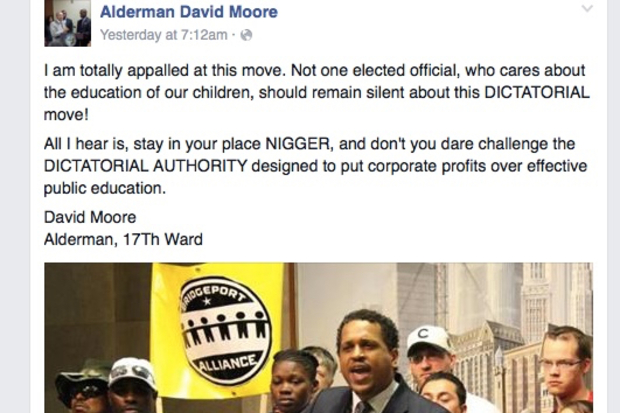 Saying he was "totally appalled," Moore went on to say, "And don't you dare challenge the DICTATORIAL AUTHORITY designed to put corporate profits over effective public education."

Moore could not immediately be reached for additional comment.

Ald. Carlos Ramirez-Rosa (35th) also weighed in on Facebook about LaRaviere's removal. Ramirez-Rosa said he was "outraged that a beloved and successful educator, Troy LaRaviere, has been removed from his principalship with no reasonable justification." He added that it "reeks of retaliation and old-school Chicago politics on the part of Mayor Emanuel and his handpicked CPS leadership."

Ramirez-Rosa said he joined in calls for LaRaviere to be reinstated.

In the face of a Reader story charging that Mayor Rahm Emanuel had LaRaviere removed to keep him from running for president of the Chicago Principals and Administrators Association, mayoral spokeswoman Kelley Quinn insisted that CPS "handles its own personnel matters, with which the mayor does not interfere."

CPS spokeswoman Emily Bittner repeated an earlier statement that LaRaviere was removed "because of alleged acts of misconduct, including violations of a previous Warning Resolution passed by the Board of Education." She said a hearing will be held to determine his employment status.

LaRaviere was accused of insubordination and conduct "unbecoming a principal of the Chicago Public Schools" during a budget meeting last summer. He was also reprimanded after comparing Partnership for Assessment of Readiness for College and Careers (PARCC) testing to exhaust fumes when responding to a parent and publicly siding with the Blaine PTA, which pushed to get all students to opt out of the two-week test.