Christ The King Students, Parishioners Will Have Air Conditioning Next Year

BEVERLY — Christ the King will be the first Catholic school in the Beverly area to have air conditioning.

The update of the heating and cooling system will begin at the end of the school year, said Ann Marie Riordan, principal of the school with 369 students.

"We are not looking at [air conditioning] as a luxury. We are looking at it as optimizing our learning environment," said Riordan, who explained warm conditions can hamper schoolwork from the start of the year through October.

The massive boilers that serve both the church and school at 9240 S. Hoyne Ave. will be replaced by a forced-air heating and cooling system. The project is expected to be wrapped up before classes resume in the fall, Riordan said.

When complete, Christ the King will be the only school within the Archdiocese of Chicago's Vicariate 5, Council 10A area with air conditioning. This area encompasses most of the schools on the Far Southwest Side, including St. Barnabas, St. Bede, St. Cajetan, St. Christina, St. John Fisher, Holy Redeemer, Queen of Martyrs and St. Walter. 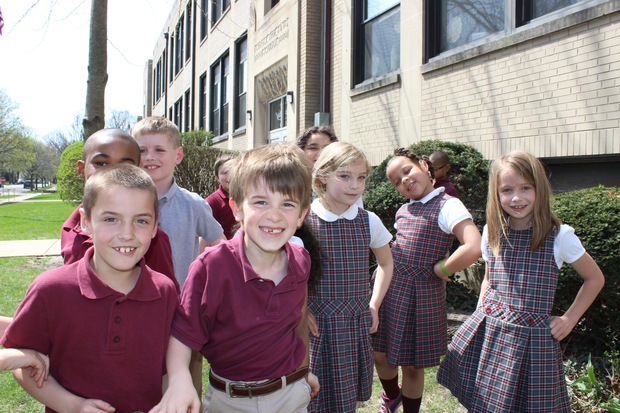 Students at Christ the King School play outside last week. The Catholic school will be the first in the area with air conditioning, according to Principal Ann Marie Riordan. [DNAinfo/Howard Ludwig]

Adding air conditioning is actually the first stage of a major overhaul of the parish that follows a fundraiser dubbed CK2050. This effort kicked off in May and sought $3 million for facility improvements.

By February, the parish had reached its goal in terms of pledges, and the total pledged now stands at $4.1 million, Riordan said.

"There is a very strong commitment to CK," she said, adding that 33 percent of the students at the school have at least one parent who was also educated there.

After the new heating and cooling system is installed, the renovation project will shift to focus on the former convent on the southeast corner of the parish. This building — also known as the Mercy Primary Center — will be completely gutted.

That project is expected to start at the conclusion of the 2016/2017 school year but could be pushed back depending on the pace of pledged donations, Riordan said.

Two kindergarten classes currently use the convent space along with the school counselor and some religious education classes. But only 22 percent of the two-story building is considered usable, as most of it is carved up into tiny rooms where nuns once slept.

"It's a beautiful building on the outside," Riordan said.

The building's new kindergarten classrooms will have room for 25 students each, compared to the 16-student maximum now allowed because of the tight space. This should help boost overall enrollment, which has already increased by 100 students over the past two years, Riordan said.

"We had a wait list this year [in kindergarten], and I hate to turn people away because of that," she said. 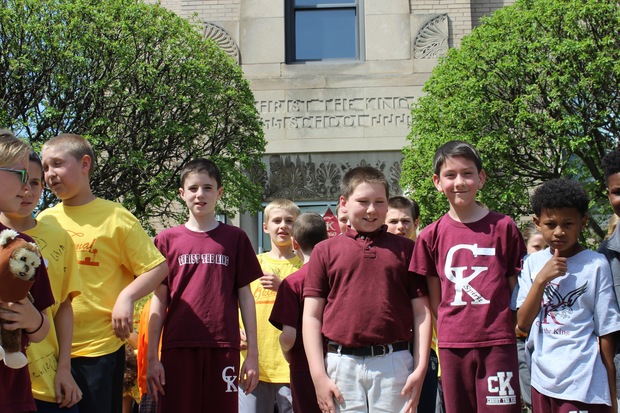 Students at Christ the King School in North Beverly stand outside the main entrance. This entryway will be transformed under a major campus overhaul that will play out over the next two years. [DNAinfo/Howard Ludwig]

The counselor's office will also be expanded inside the renovated convent, and the music and art programs will have permanent rooms in the building, too.

The school library will also move into the convent and increase its technology offerings, including a stock of digital books and access to computers. A full-time librarian will join the staff once the project is complete and help teach research techniques, successful study habits and test-taking strategies, Riordan said.

The infamous underground tunnel that connects the convent to the school will remain, Riordan said. But the two buildings will also be joined by a new above-ground, indoor stairwell.

The stairwell will be part of a new entryway that will fill in the gap between the former convent and the school. It promises to be more secure and will move Riordan's office to the main floor, beside the school secretary.

An elevator will be included as part of the new entrance, making the school more accessible.

The facility improvements all began with Riordan's dream to have Christ the King recognized by the National Blue Ribbon Schools Program. Besides building mandates, the award also relies on testing results to identify deserving schools.

Christ the King and the other Catholic schools in the area are in the process of switching over to a new standardized testing system known as the Aspire test, so officials said it will take a couple years before year-over-year statistics are available.

But Riordan said that facility improvements will be wrapping up just as these tests begin to paint a picture of the academic standards at the school. And she hopes that will put Christ the King in ideal position to take home the coveted award.

"My hope is that it will all be this perfect storm," she said.