DOWNTOWN — A front-row seat to the fastest-flying bird in the world is a click away.

The Chicago Peregrine Program has activated its live webcams at peregrine falcon nests throughout the city and suburbs. The webcams are available April through June, when the birds are nesting.

Neighborhood nests with webcams include ones in South Loop, UIC, Millennium Park and Belmont-Addison in Lakeview.

In recent years, the raptors have been spotted nesting on a balcony in Lakeview, at the University of Illinois at Chicago, at water-intake islands 2 miles out in Lake Michigan, and even attacking a great horned owl off the Rogers Park lakefront.

"The beginning of each Peregrine season is exciting and each nesting season carries its own set of challenges," said Mary Hennen, director of the Chicago Peregrine Program. "To see who has returned and who is new, find new nesting sites, and trying to figure what is happening is intriguing, but I believe the most satisfactory aspect of working with the falcons is at the end of the nesting season when we can witness a successful fledging of young from the nest." 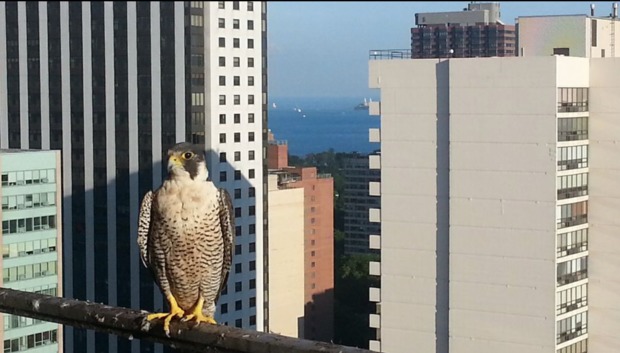 The raptor species is the fastest-flying bird in the world, as they can dive at 200 miles per hour, eating birds they capture — like pigeons — in mid-flight.

The Field Museum's Chicago Peregrine Program monitors 29 peregrine territories, and in 2015, 20 pairs attempted breeding, and 15 were successful, according to the group.

It's been a remarkable comeback for the bird, which was federally recognized as endangered in 1973 but taken off the list in Illinois last year. Though removed from the Illinois endangered list, they are still protected under the Migratory Bird Treaty Act.

A turning point for the bird came in 1972, when the use of DDT insecticides was banned. The agrochemical had caused shells to thin, preventing baby falcons from forming.

It wasn't until 1986 that the birds could be found again in Illinois, and 46 pairs were released in the next four years.

In addition to the DDT ban, their recovery can be attributed to their adaption to cities, and their protected status as an endangered and threatened bird, Hennen said. The Chicago Peregrine Program monitors the Illinois population and places ID tags on the birds.

For the last few years, the raptors have been breeding and nesting on Chicago's "cribs," the four, man-made water-intake islands 2 miles out in Lake Michigan.

Hennen earlier this year said there's "no reason to think they won't nest again at the Wilson Avenue and 68th Street cribs" in 2016.