By David Matthews |&nbspMarch 28, 2016 6:23am | Updated on March 28, 2016 5:47pm
@DavidLMatthews
Twitter Facebook Email More
A rendering of an 80-unit apartment building Draper & Kramer wants to build at 65 E. Banks St. The developer once proposed a 40-story tower at the site before getting into a legal fight with the city and neighbors.
View Full Caption
Draper & Kramer

GOLD COAST — The developer that wants to build a small apartment building on a Gold Coast parking lot once aimed much higher, but a legal fight that went all the way to the state supreme court forced the plans for the site down to earth.

The property's checkered history better explains why Chicago-based Draper & Kramer revealed such modest plans last week for a prime development site just off Lake Shore Drive. The developer eyes a mid-rise, 60-unit building at 65 E. Banks St., the last unbuilt lakefront property between Diversey Avenue and the hole in the ground dug for the Chicago Spire.

Draper & Kramer has owned the lot for decades, and first proposed a 40-story, 196-unit tower there in 1997. But the high-rise proposal drew the ire of an influential neighborhood group and led a former Gold Coast alderman to scale down the property's zoning, sparking an ultimately unsuccessful lawsuit against the city that lasted nearly 10 years, court records show.

Equipped with lawyers, architects and a former head of the Chicago Plan Commission, the Gold Coast group didn't bring an ordinary NIMBY effort, said former Ald. Charles Bernardini (43rd), who represented the area from 1993 to 1999. The group swayed the city with its argument and then beat the developer in court, giving a blueprint to future neighborhood advocates across the city.

"It’s a fascinating story of neighborhood organization and opposition," said Bernardini, who's now a partner in the Chicago office of Nixon Peabody LLP. 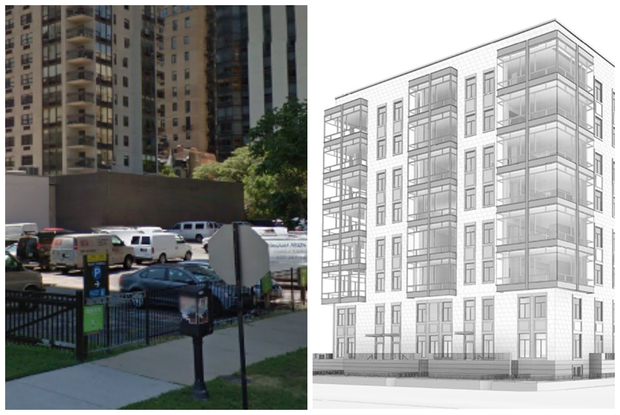 Draper & Kramer long had the legal authority to build the high-rise it proposed in 1997. But Gold Coast neighbors balked at the developer's 40-story proposal, saying it didn't fit in with the neighborhood's vintage mansions nearby. The group, led by real estate lawyer and former Chicago Plan Commission chair Reuben Hedlund, argued for a six-story, 26-unit luxury building at the site instead, and even hired architects and planners to design it, according to the Tribune.

"The folks there in the Gold Coast association, they were professional ... they made a reasonable argument: If you think about that neighborhood there on Astor, Banks and Schiller, there are no buildings of that height," Bernardini said. "The neighborhood association was always willing to allow some kind of building there ... it really wasn’t a question of anybody's views."

Bernardini and the council scaled down the site's zoning in 1998, killing Draper & Kramer's high-rise proposal. The developer then sued the city, pleading for a building permit under their previous zoning rights. The lawsuit reached the Illinois Supreme Court, which sided with city officials in 2006.

"Only when it was determined that no agreement would be reached did Bernardini introduce" the zoning change, the court wrote. "At that point, [Draper & Kramer] knew or should have known that it was not probable it would obtain a building permit for its project."

Bernardini said those behind subsequent zoning battles over reuses of the former Children's Memorial Hospital in Lincoln Park and the failed proposal to move the Chicago Children's Museum to Grant Park "took lessons" from the Gold Coast group. But the real reason this Gold Coast group succeeded where others have failed, he admitted, is simple: money. The group reportedly spent at least $639,000 on its efforts.

"The difference was, honestly, they had the financial resources to hire lawyers," Bernardini said. "Not just hire lawyers, [Hedlund] lived over there and was knowledgeable in this practice in law, he was passionate about it."

Attempts to reach Hedlund were unsuccessful, and representatives of the Gold Coast Neighbors Association did not return a message seeking comment. A Draper & Kramer spokesman said in a statement that that the developer "continues to work with the neighbors, city and the alderman re: the project and will report progress as it is made."

The fate of Draper & Kramer's new mid-rise idea will likely be decided by different neighbors and a different alderman: Ald. Michele Smith (43rd), who said she has not reviewed the project. A neighborhood meeting has yet to be scheduled.