PORTAGE PARK — The Chicago Plan Commission on Thursday unanimously approved the proposal to replace the empty Bank of America branch at the heart of the Six Corners Shopping District with a massive shopping center anchored by Ross Dress for Less and Aldi.

The shopping center at 4747 W. Irving Park Road — to be known as the Point at Six Corners — would include space for a dozen stores in total, according to the proposal from Clark Street Real Estate, which officials said was designed to restore Six Corners to its status as an "iconic" shopping designation in Chicago.

The proposal drew mostly positive feedback Wednesday night at a community meeting, although some Portage Park and Old Irving Park residents said they were less than thrilled the center would not be anchored by more upscale retailers, like Trader Joe's.

The project has the support of Ald. John Arena (45th), who said he believed it would "enhance the vitality of Six Corners, thus enabling small, locally owned, and unique businesses to thrive in the commercial district."

The one-story shopping center, which is not asking for any money from the Portage Park Tax Increment Financing District, required a zoning change because of the size of the site and the developer's desire to build more shops and offer a "wider range of uses," than the current rules allowed, officials said.

The project must also be approved by the City Council Zoning Committee, which almost always defers to the wishes of the local alderman, and the full Council.

If approved quickly by city officials, construction on the center could start this summer, with the first stores opening a year later, said Peter Eisenberg, of Clark Street Real Estate.

In addition to a parking lot with between 265 and 275 spots, the shopping center's roof would feature a covered pedestrian walkway to allow shoppers to cut across the triangular property at the heart of Six Corners, Eisenberg said.

Work has begun to demolish the former Bank of America building. 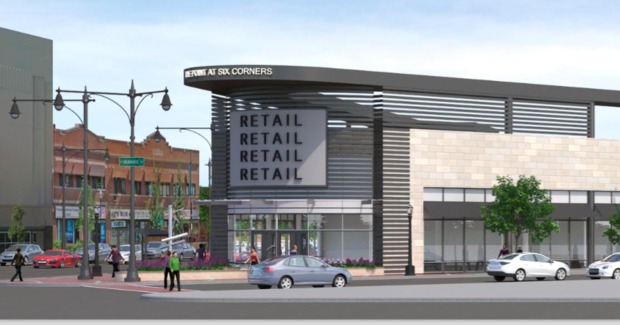 The project includes a plaza to be built at the six-corner intersection as well wider-than-typical sidewalks to create permanent People Spots in order to provide gathering spaces.

A Divvy bike-sharing station is set to be built just outside the planned shopping center at Irving Park Road and Milwaukee Avenue.