ROGERS PARK — To the hungry layman, the many Mexican and Latin eateries that line the 10 or so blocks of North Clark Street in Rogers Park might all look the same.

But ask the owners and you'll start to hear stories that combine family histories, regional flavors, dreams of entrepreneurship and a downright love of food.

"Walk along Clark Street in Rogers Park and you can see and feel the authenticity of the family-owned restaurants," said Shirley Coenen, communications coordinator for the Rogers Park Business Alliance. "Clark Street is a hidden treasure."

Each year, the business alliance sells out its "Taco Crawl" event, meant to showcase the variety and highlight each business' specialties — but during the rest of the year, owners said they can sometimes see slow sales.

They also said though some restaurants may offer similar items, each comes with a distinct family background and special twist.

It's a "value and richness" these businesses provide that not only taste good, but help strengthen the neighborhood, Coenen said.

Check out the stories of three Clark Street restaurant owners, as told with the help of Coenen, who served as a translator to DNAinfo. 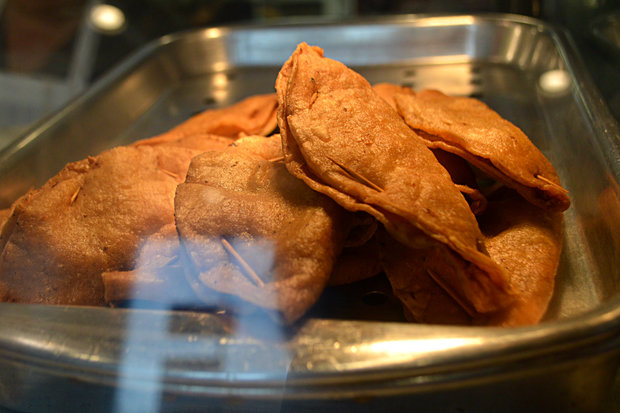 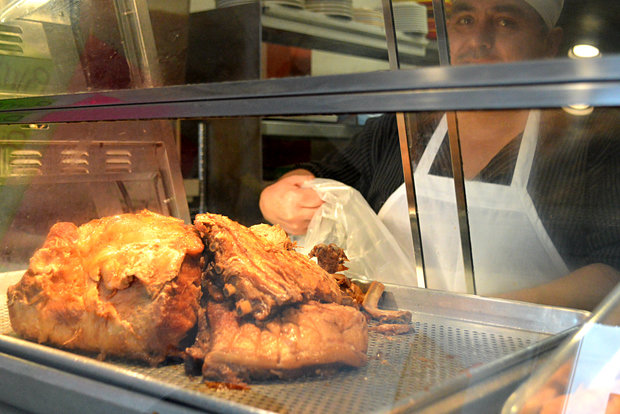 Adrian Perez shows off his carnitas, which draw in Mexicans living in Rogers Park, he said. [DNAinfo/Linze Rice] 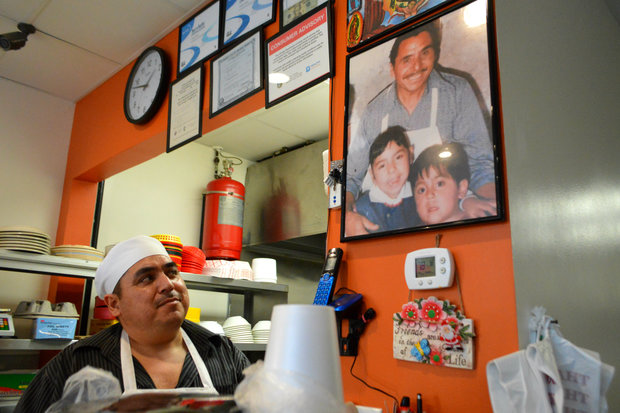 Adrian Perez, owner of Birrieria Y Carnitas El Gallito at 7021 N. Clark St., said his family has been involved with food for decades, he he dedicated his restaurant to his late father. [DNAinfo/Linze Rice]

Birrieria Y Carnitas El Gallito at 7021 N. Clark St. has been open for only about four months, but has already become known as the place to go for authentic carnitas and birria, a Mexican stew, owner Adrian Perez said.

On the weekends, he said his store is filled with Rogers Park residents who are from Mexico and yearning for a taste of home.

Perez runs the store with his wife, sons, mother, brothers and other family members as a tribute to his late father — who taught Perez how to love to cook, and died only eight months ago.

"It's the reason we opened," Perez said. "He taught me everything I know. Like father, like son."

Pictures of Perez as a young boy alongside his brother and father serve as a daily reminder of why Perez decided to open his own restaurant on Clark Street to begin with.

Perez said his passion for food started as a child working with his father on their family ranch in Mexico, though he's long been involved in the Clark Street food scene. For nearly 15 years, Perez has also owned a fruit market just down the street.

For more than 50 years, his family owned a meat store where they butchered their livestock and sold it to the local community.

During that those years, he said his father taught him how to cook and create recipes, many of which are used in his store today.

He said though most Mexican eateries offer carnitas, his have the "most authentic in Mexican flavors" and promises a taste test won't disappoint.

• Carnitas: A staple to any authentic Mexican restaurant, El Gallito serves up "the best" carnitas, Perez said. Carnitas, meaning "little meats," is slow-cooked pork that simmers in oil or lard until juicy and tender. It can be served traditionally in a corn tortilla with chopped cilantro and onion, in fried dough pockets, burritos and much more. 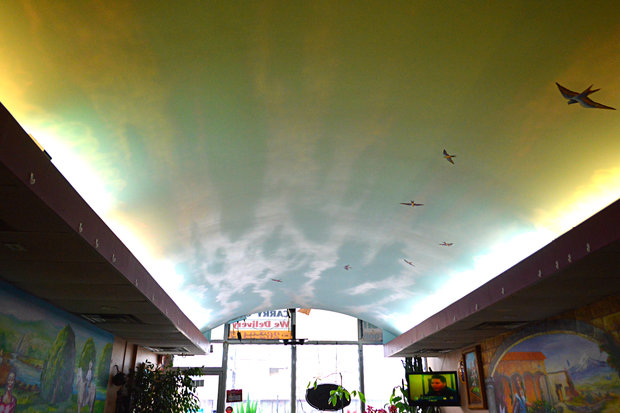 The ceiling at Cuetzala was painted by an artist who had created murals at other buildings across the city. [DNAinfo/Linze Rice] 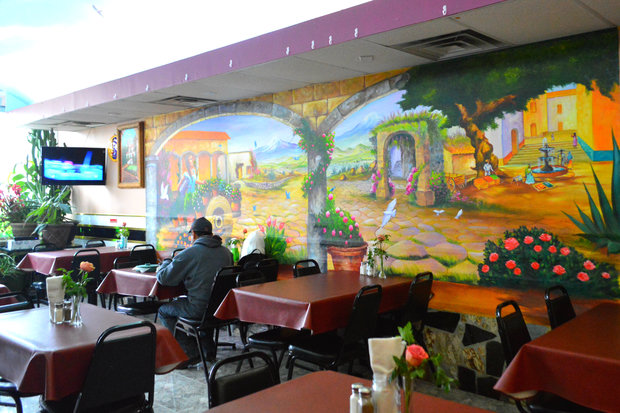 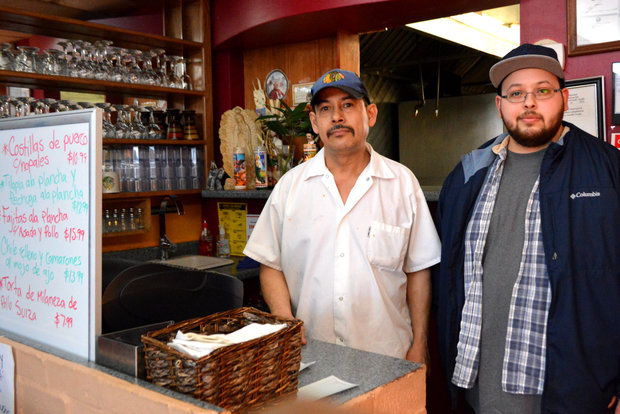 Saul Moreno and son, Hugo, have ran Cuetzala Mexican restaurant at 7360 N. Clark St. for the past 11 years, incorporating both family recipes and Italian recipes into menu items. [DNAinfo/Linze Rice]

Hugo Moreno said though he serves as the accountant at Cuetzala, 7360 N. Clark St., he "could never do" what his mother and father do day-to-day: Buying up fresh ingredients, cooking from memorized family recipes and trying to stay current among other area restaurants.

In 2005, Moreno and his wife opened Cuetzala on Clark Street and began slinging out dishes whose recipes originated with both Moreno's mother and mother-in-law.

"I couldn't do what they do," Moreno said of his parents. "They're the only ones who can do the recipes. Nothing is written down, they don't use measurements. They just know it all by heart."

Always taking a liking to working more than schooling, Moreno's father, Saul, came to the United States from Mexico City at age 13. He would eventually return to his hometown to marry his sweetheart before the two of them would return to the United States seven years later, the both of them looking for an opportunity to live out their dreams.

Moreno landed a job at a downtown seafood restaurant that would inspire him to create recipes he'd later serve at his own restaurant long after the seafood joint closed.

When it did, he followed several other employees to work at a car dealership — but his passion belonged in the kitchen, his son said.

The family can feel the pressure of other restaurants in the area, and their far distance to the north of other popular hang out areas, Moreno said, but his family loves it, and works hard to keep it, all the same. 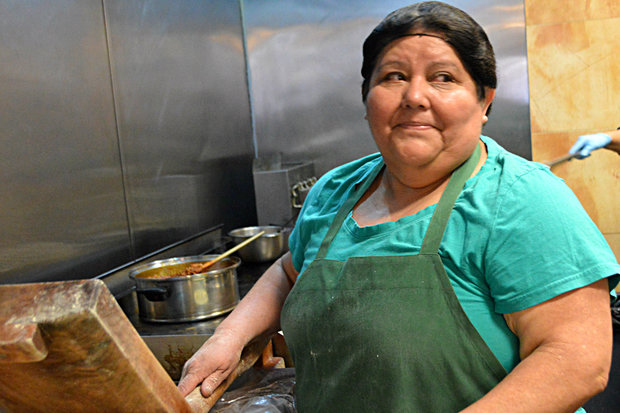 Maria del Rocio Calvente Gutieriez, owner of Fonda Dona Chio, 6906 N. Clark St., said she wanted to open a restaurant with her sister in the neighborhood after working at an eatery downtown. [DNAinfo/Linze Rice] 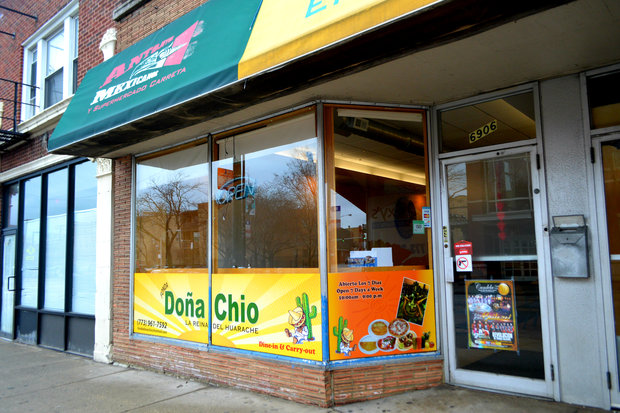 She'd already been an experienced restaurateur — having owned her own eatery for nine or 10 years in Mexico — and once she was settled in Chicago, Gutieriez said what she really wanted to do was open a place with her two sisters in Rogers Park.

Soon after, that's exactly what she did.

The group first opened a small taqueria on North Shore Avenue, but quickly outgrew the space and two years ago expanded to its current location.

Now she works alongside her sisters and daughter pressing fresh, homemade tortillas and serving up her specialties: Chicken tinga and squash flower tacos.

She said she's loved to cook from a young age and isn't afraid of the competition on Clark Street — she loves "everything" about how each restaurant brings with it its own regional flavors and nuances.

Clark Street allows each business owner to be themselves through their food, she said.

• Chicken Tinga: Tinga is a flavorful stew-like dish that originates from Pueblo, Mexico that combines sweet, spicy and smoky flavors with tender meat, like Gutieriez' chicken.

• Flor de Calabaza (Squash Flower Taco): The squash flower taco is Fonda Doña Chio's signature item. Flowers from squash or zucchini are common in many Mexican dishes, including soups and quesadillas (and of course, tacos.)