UKRAINIAN VILLAGE — A man running for state representative said he was attacked with a staple gun by two people putting up his rival's signs outside his campaign office, but a lawyer for the alleged attackers say he was the one who started the fight "unprovoked."

Robert Zwolinski posted graphic photos to Facebook showing a smashed nose and blood dripping down his face from a metal staple embedded in his forehead, just at the hairline.

Zwolinski said he and his girlfriend, Megan Dunworth, were driving past the office on their way home when they spotted a man and a woman "lurking" with signs outside his office.

"I went up to them and said 'Come on guys, what are you doing? This is my office,' " Zwolinski told DNAinfo Monday. "Then the guy pushes his forearm against me and the woman just starts screaming 'This isn't your territory' or something like that.

"Suddenly she pounces on my back and starts scratching and tearing at me, and before I know it all three of us are on the ground," Zwolinski said. "This girl is insane. ...I've never seen so much craziness in a person. She needs to be found and taken off the streets."

In the ensuing fight, Zwolinski continued, the woman "clunked" an empty Corona bottle over his head, kicked him in his face and shot a staple from her staple gun into his forehead. 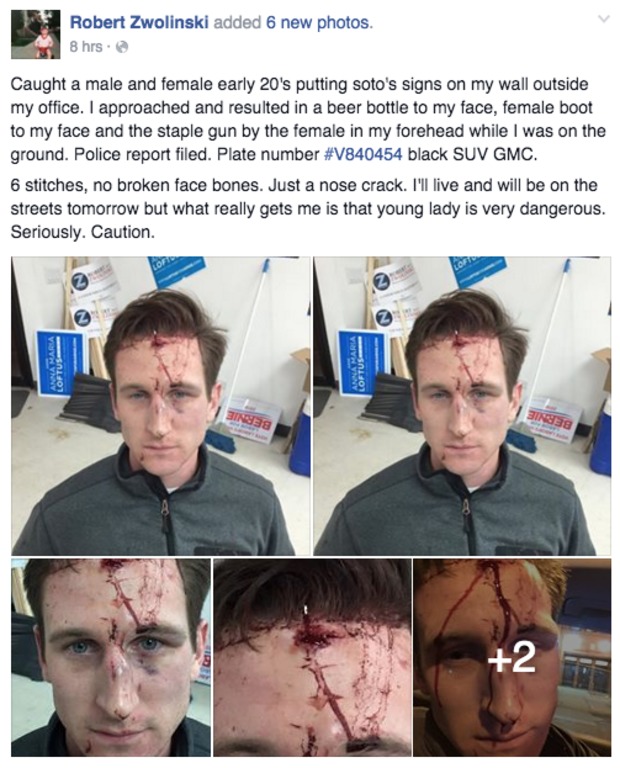 After blood starting running down his face, Zwolinski said, the man said "We gotta go" and the pair fled in a black SUV.

Dunworth brought Zwolinski to St. Mary's Hospital, she said, where the staple was removed and he received six stitches in his head.

The man involved in the dustup later filed a police report with an alternate version of events: he told police that Zwolinski grabbed him, threw him to the ground and punched him repeatedly in his mouth, police said. He also was hospitalized.

Speaking outside Zwolinksi's office Monday, Frank Avila, an attorney representing the alleged attackers, called the episode a "false flag" and a "media stunt trying to draw attention to a flailing campaign."

"[Zwolinski] saw people putting up signs along Ashland, and he started pushing them and grabbing them," Avila said. "He initiated physical contact, and they defended themselves. ...If he ended up getting the worst of it, that's on him."

Avila said his clients, two unpaid volunteers for Soto's campaign, were stapling signs over a vacant property next to Zwolinski's office — not on the office itself.  On Monday, he pointed to the corner of a Soto sign that remained on a door next to his office.

"I believe it's possible he put a staple in his own head for publicity," Avila said. "I mean, he starts the fight, he doesn't get the better of the fight ... for a faltering, losing campaign, this is a great stunt for him."

Avila declined to name his clients, calling them "private people," but said they were in their late 20s or early 30s. He also said surveillance footage and witnesses will prove that Zwolinski started the fight.

"Yes, there was a fight, yes, there was self defense," Avila said. "[But] why did he call the media before he called 911? Why is he going out and confronting people? Why would they just fight him?"

Avila said surveillance footage from nearby businesses would support his clients' version of events.

Two cameras are mounted above Zwolinski's office, but the candidate said the property owner had disconnected them months ago.

While Zwolinski didn't personally blame Soto for the attack, he said he wasn't surprised her supporters were "so jacked up" about the race.

"[Soto] has been there 16 years unopposed, and lots of people bank off of her position with jobs and opportunities and power," he said. "I don't think it was a hit mission, but those orders to put signs up on my office had to have come from somewhere.

"These are the same kinds of tactics this old regime has been using for 16 years," Zwolinski added at a press conference outside his office Monday afternoon. "You need to be in charge of your staff — you need to set expectations."

After the fight, Dunworth said, the woman ran up to her car and held the staple gun to Dunworth's head, threatening her. Then she heard a car honking, and the woman fled, she said.

"I know this is a hot race, and it's picking up this kind of attention, but I can't believe someone would stoop to this kind of thing," Dunworth said. "I just thank God she only had a staple gun, because those people could have killed us last night."

Chicago Police confirmed that Zwolinski filed a report. According to police, around 9:15 p.m. Sunday, Zwolinski told them he saw a man and a woman stapling posters outside his campaign headquarters at 823 N. Ashland Ave., according to Officer Ana Pacheco, a Chicago Police spokeswoman.

Zwolinski told police the man punched him in his chest, and the woman cracked a glass bottle over his head and shot him in his face with a staple gun, Pacheco said. He refused medical attention after the incident, she added, but Dunworth said he later went to St. Mary's Hospital for treatment.

According to the other man's police report, Pacheco said, Zwolinski grabbed him and "pushed him to the ground, punching him repeatedly in the mouth." He was taken to St. Mary's Hospital with "non-life threatening injuries," Pacheco said.

Zwolinski added that he still plans to spend the week campaigning ahead of the March 15 primary.

"I want voters to know: I'm here to fight for you, literally," he said. "I'll take a beating for you."