DOWNTOWN — Chicago Teachers Union President Karen Lewis says teachers plan a "showdown" for April 1 — but she didn't say whether the teachers would walk off the job on that date or hold a rally downtown.

Lewis declared a "showdown," even as both sides blinked Friday in the ongoing contract standoff between teachers and Chicago Public Schools.

Declaring an "unfair-labor-practice day of action" on April 1, Lewis said at a news conference Friday it could produce a one-day walkout or "just a nice big rally Downtown."

"We haven't decided," Lewis said. "That's something that we're gonna have discussions with our members about. We don't know."

Lewis said the union was momentarily cheered that CPS "backed down" Friday on a threat to stop paying a 7 percent pension contribution for teachers.

Union lawyer Robert Bloch added that a CPS decision to impose three furlough days on all district employees this spring, including teachers, was "not a strikeable topic," and Lewis declared it was not "strike-worthy."

The comments were less harsh than what union officials said Thursday, when they said that a strike was "all but assure[d]" after the district announced it was forcing three unpaid days on workers in order to save $30 million.

Speaking at an East Garfield Park school Friday, before Lewis made her comments, Claypool said state law dictates that certain negotiations must be undertaken before a strike can be authorized.

Claypool said an arbitrator must weigh in, and a fact-finding mission must be completed before a strike can take place. He said the union couldn't strike until mid-May.

Lewis took issue with that sort of certainty.

"They're allowed to say whatever their theory of the case is," she said. "We have our theory, they have theirs. Some judge will figure that out at some point."

Bloch also countered Claypool, saying it was true teachers couldn't walk out until mid-May on a "contract strike," but in the case of unfair labor practices — including a unilateral pay cut — that would mean the union "is free to act on its own," without approval from a judge or the Illinois Educational Labor Relations Board.

The district had sent the union a letter Feb. 2 giving 30 days notice that it would cease making that 7 percent pension payment.

Yet, even though 30 days has passed, Claypool said that the school district will not drop its pension pickups until after negotiations on a new contract have ended. He said it would not be in good faith to do so until discussions have completely stalled.

But he said the district isn't backing down on its furlough plan, which would mean teachers and all district staff would have to take three unpaid days off.

"This was the best approach in our judgment," Claypool said. "Good Friday is a low-attendance day, a religious holiday for many."

The union said that would amount to a 1.6 percent pay cut, again violating the standing agreement with a unilateral action, and Lewis Thursday said it "only strengthens our resolve to shut down the school district on April 1."

But it changed its tune Friday. Lewis said the furloughs on their own would not lead to a strike.

Lewis, however, did not change her tune on Gov. Bruce Rauner, who she said has sought to undermine CPS, "blowing up the Chicago school district." She called Rauner "a true enemy of the state."

Meanwhile, CPS sent a letter home with students to parents about the planned furlough days, which means students will not attend school on Good Friday March 25. Read the letter below. 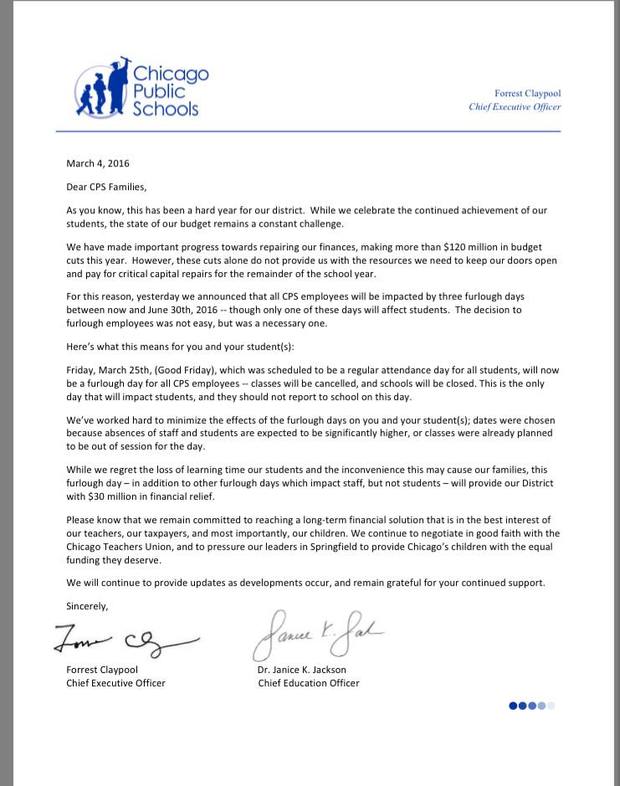