Bow Truss Is the Biggest Indie Coffee Shop in Chicago. Now What?

CHICAGO — "If somebody asks me if we open by Starbucks on purpose ... I'm like 'no,'" Philip Tadros says from one of his new coffee shops across the street from a Starbucks.

"But I really like to be near them. They have enough money to do the research."

Tadros, 36, is the founder of Bow Truss Coffee Roasters, which at eight coffee shops and following Peet's acquisition of Intelligentsia Coffee last year, is now the biggest independent coffee chain in the city. And Bow Truss is just getting started, with plans to more than double its number of stores here by the end of next year.

Reporter David Matthews on what makes Bow Truss different than other coffee shops.

It's an aggressive plan, and one people have already used to derisively label Bow Truss as a "gentrifier" of developing neighborhoods. But Tadros said he's simply riding a java wave.

"People want us. I’m getting people emailing me [saying] 'I have a building, I’ll build it out for you, or we want your coffee in our hotel,'" he said. "It’s kind of easy to grow when people really want you to."

Tadros' story starts when he was a 19-year-old who dropped out of Columbia College Chicago. He was studying marketing and advertising at the time, but told his mother he couldn't see himself passionate about media campaigns for things like laundry detergent. He was too young to drink or hold a liquor license, so he borrowed $13,000 from family to buy Don's Coffee Club in Rogers Park instead. His rent was $500 a month.

Soon after, he opened Chase Cafe nearby, and then the first Dollop Coffee in Uptown in 2005. He lived above the coffee shop in Uptown for five years before selling it to focus on Doejo, his marketing company that's helped launch 500 startups here and still holds a majority stake in Bow Truss.

When he saw Dollop's new owners growing the business, Tadros decided to get back into coffee. He opened Bow Truss in 2012 after launching Noble Tree, Kickstand, and State Farm's Next Door cafes. Two years later he raised $300,000 in a week online for a new Bow Truss roasting facility.

Tadros won't say how much fundraising he's done since then, but many of his biggest investors are real estate developers who want a Bow Truss in their building. Which explains why so many Bow Truss coffee shops are arriving via big changes to the neighborhoods.

"We're just trying to keep up with demand," Tadros said.

Not everybody's happy about that, with some Pilsen residents stamping a new Bow Truss there with signs saying "This Is What Gentrification Looks Like."

Tadros, whose Bow Truss website includes an option for customers to invest in the business,  said he has no plan for world domination, but defended his company's expansion in the city's neighborhoods.

"Everything's changing; it's OK to change," he said. "I don't want to be a part of displacing anybody. That's dramatic, and I wouldn't want that ever. But everything's in motion. We're alive, you know?"

He also maintains his coffee chain's independence. As of last year, Intelligentsia and Stumptown are owned by the same company that makes Green Mountain K-Cups, and La Colombe is funded by Chobani yogurt founder and owner Hamdi Ulukaya.

"I think this is the big part of the fight," Tadros said. "Ninety-plus percent of the coffee we have out there is really bad." 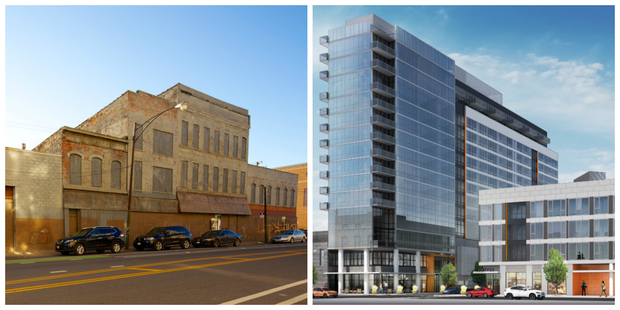 Tadros doesn't have expansion goals, but he does have locations picked out for at least nine new Bow Truss shops set to open by the end of 2017. He's "working on" another near the intersection of North, Damen, and Milwaukee avenues in the heart of Wicker Park. He's already opened a Bow Truss in Beverly Hills, and wants to open another in Washington, but otherwise has no firm plans outside Chicago.

The Mariano Park shop will be the first in the new wave this spring, followed by another in an apartment building under construction next to the Paulina Brown Line station, and, like some of his other stores, across the street from a Starbucks.

Besides Bow Truss, Tadros just opened Bunny, a bakery, and has other plans: FundedFoods, a crowdsourcing site he's launching soon for restaurants and other food startups. He got the idea from his own experience seeking loans for coffee shops 17 years ago.

"As someone who’s had to take stupid interest rate loans because banks won’t give money to small businesses, letting people fund their neighborhoods and businesses and brands that they want is the way to go," he said.