South Side Irish Parade's Past, Present Highlighted in Artist's Work

MORGAN PARK — David Barista has fond memories of the South Side Irish St. Patrick's Day Parade, but there was once an ugly side to this event.

Barista's latest work, titled "Votive Paintings to St. Patrick," takes an unblinking look at the problems of past parades while celebrating the reincarnation of the event. His four paintings are on display at O'Rourke's Office in Morgan Park.

"I think we do forget this is St. Patrick's Day — not 'go get drunk day,' " said Barista, who teaches art in suburban Summit.

Three of the four paintings hung Friday afternoon in the bar at 11064 S. Western Ave. are painted on Guinness beer cans. They feature a scene of friends drinking along the train tracks, someone passed out on a couch and a fist fight.

The fourth painting uses an empty case of Guinness as a canvas and depicts a grandfather holding his granddaughter at a recent parade as bagpipers march by. All of the paintings also feature the image of St. Patrick along with a note thanking the patron saint of Ireland for various things. 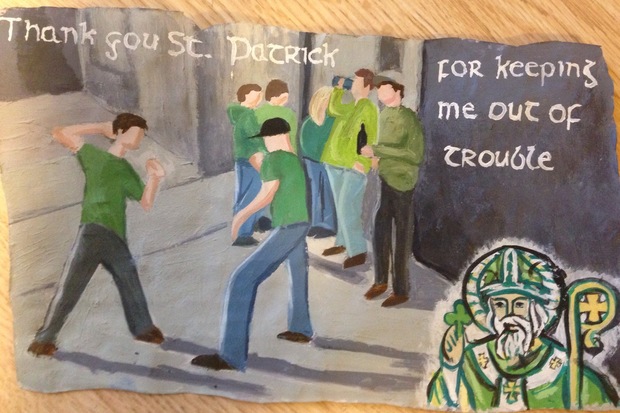 "My mother is not proud of these, and I am sort of ashamed at some of the things I did," said Barista, a native of suburban Palos Heights.

Barista graduated from Marist High School in Mount Greenwood in 2003. He has attended the South Side parade since he was a boy and said most of the parade-day mischief he experienced was during his late teenage years.

The artist living in suburban Chicago Ridge was inspired to compose the pieces after taking several classes at the National Museum of Mexican Art in Pilsen. There, he studied Mexican culture including votive painting made to depict miracles or significant events.

These paintings are often made on tin and commonly depict Our Lady of Guadalupe alongside impactful scenes such as a baby who survived a deadly illness or a house fire where everyone survived. The handmade pictures are then left inside churches or beside shrines, Barista said.

He took this same concept — rooted in Catholicism — and applied it to his own Irish heritage. Thus, he used the aluminum cans as a canvas and included a picture of the saint who will be celebrated March 13 with the parade that stretches from 103rd-115th streets on Western Avenue. 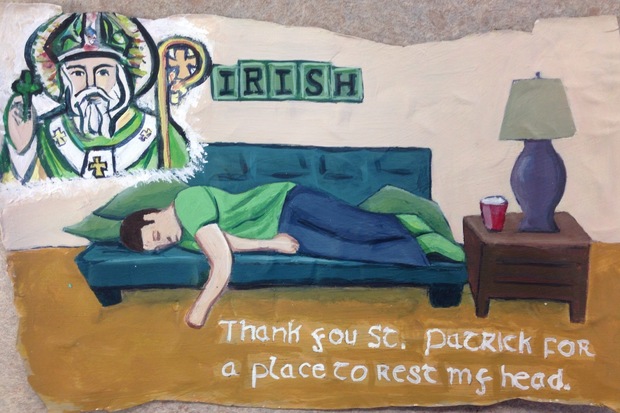 "I think it also questions the St. Patrick's Day party culture," said Barista, who grew up less than a mile from O'Rourke's owner Dave Kriedemann.

The bar owner knows some people may be upset by the paintings. Others may find them funny. And still others may use the paintings as a launching pad for discussion — as intended by the artist.

"I think, if anything, the parade got better. Though, it may not be better for business," said Kriedemann, referring to the event's renewed focus on family.

He added that the crowds are down compared to the party days of the past. But the new audience still makes for a "good day" and without the rowdiness that once came along with the event.

Indeed, the South Side Irish Parade began as a modest march around the block for local children on March 17, 1979. It has since evolved into the largest neighborhood St. Patrick's Day parade outside of Ireland. 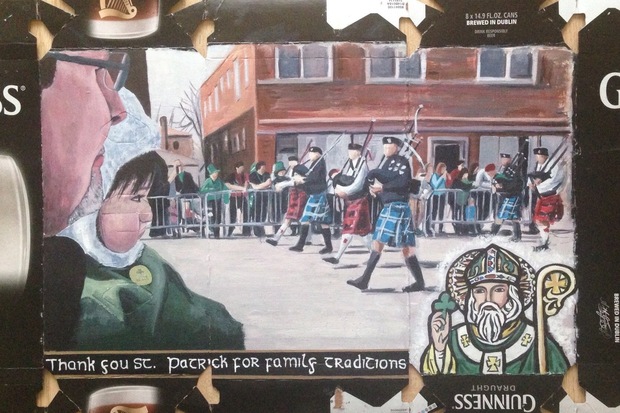 The parade was abruptly canceled after a particularly troublesome march in 2009. Drunken behavior was blamed for the shutdown. But organizers brought back the parade two years later, enforcing a strict no-alcohol policy along the parade route.

Barista taught painting, drawing and sculpture classes from 2006-2009 at the Beverly Arts Center. He hopes to complete at least two more pieces for the local exhibition prior to the parade kickoff, including a still life painting of Irish soda bread and a piece involving corned beef.

Both the Barista and Kriedemann hope the paintings serve as a warning for people attending the event not to return to their drunken ways. Both said the present parade is better representation of what the day is truly meant to celebrate.