By Alisa Hauser |&nbspFebruary 23, 2016 2:29pm | Updated on February 23, 2016 5:16pm
@DNA_wpb
Twitter Facebook Email More
A cyclist who was riding on The 606 after it closed for the evening late Friday was attacked and mugged by a group of men, police said.
View Full Caption
DNAinfo/Alisa Hauser

HUMBOLDT PARK — A cyclist who was riding on The 606 after it closed for the evening late Friday was attacked and mugged by a group of men, police said.

The incident occurred around 11:30 p.m. Friday in the 3200 block of West Bloomingdale Avenue, on the western end of the 2.7-mile long elevated path that runs from Bucktown to Humboldt Park.

The 25-year-old victim, whose cell phone, wallet and bike were taken, was not seriously injured, according to Officer Janel Sedevic, a Chicago police spokeswoman.

Sedevic said the victim "related that he was cycling on the 606 Trail when he was approached by four unknown males who forced him to stop his bike. They proceeded to batter the man, taking his cell phone, his wallet and his bike before fleeing."

In a Reddit post on Monday, the victim of the attack urged other cyclists to "be careful on the 606 in the warmer weather."

"...young guys in hoodies walking the other direction jumped in front of my bike and the biggest guy took me off my bike in a headlock (I was booking it, so we all fell to the ground). One other guy proceeded to punch me in the ribs while the dude choked me and the third guy stole my phone and my bag with my wallet along with other stuff and then took off on my bike," the victim wrote.

After being stripped of his bike, and "nowhere near an exit," the victim said he "jumped the fence and got up to Armitage [Avenue] and walked home."

Reached on Tuesday, the cyclist, who asked to remain anonymous, said he lives in Humboldt Park and was riding a National Ultra Sport bike — his only form of transportation.

"I was biking home from work in Lakeview and took the trail because there were a lot of cars out, and I have ridden late at night before without incident. I don't really see me using the trail at all for a little while and I am going to be much more cautious when I'm riding anywhere at night," the cyclist wrote in an email. 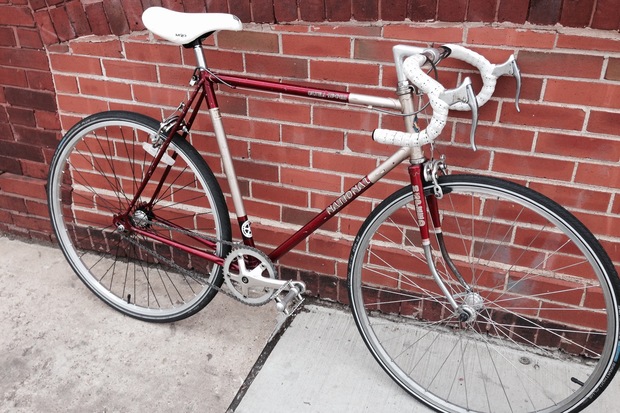 A National Ultra Sport bike that a mugging victim said was stolen. [Provided]

Jessica Maxey-Faulkner, a Park District spokeswoman, said that often times "after hours incident reports are made to the Chicago Police, rather than the Chicago Park District," referring to the fact that The 606 and Bloomingdale Trail, like all Park District parks, is open from 6 a.m. to 11 p.m. daily.

Sedevic said detectives are investigating the robbery and four men are being sought in the incident. She said the suspects were black males between the ages of 16 to 21, approximately 5 feet, 7 inches to 6 feet, 2 inches tall, weighing between 160 to 180 pounds.

No one is in custody at this time.

The victim said he was planning to provide a police detective with a screenshot of where his phone was located around 1 a.m. on the morning after the incident, a Humboldt Park intersection he'd traced using a phone locater app.

Call boxes similar to those found on college campuses were scheduled to be installed along the trail, former Shakespeare District Police Commdr. Marc Buslik said last year, though there was no set timeline.

Currently, there are surveillance cameras at all of the trail's 12 access points, as well as cameras anywhere the trail bends enough that there would not be clear line of sight, a spokeswoman from the Trust for Public Land, the city's public private partner that is managing the project, said last year.

Though The 606 website advertises the park as closing at 11 p.m. daily, the Chicago Park District Code permits usage of parks between the hours of 11 p.m. and 6 a.m. on the following day when the park is used as a direct route.

"Persons and vehicles may pass through such parks without stopping on the more direct walk or driveway leading from their point of entrance to the exit nearest to their point of destination," the code says. 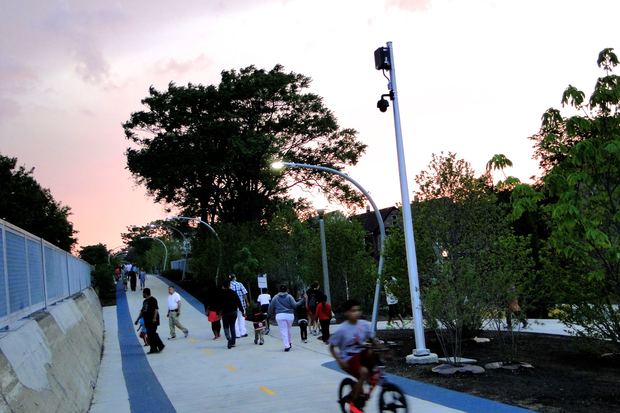