SOUTH LOOP — The Shrine will close its doors at the end of the month to make way for a new development, the South Loop nightclub said Wednesday.

The club, 2109 S. Wabash Ave., sent a mass email to patrons Wednesday afternoon saying it will close after a Busta Rhymes show Feb. 28. Once closed, the club at Cermak and Wabash will make way for a new apartment and hotel project.

"To those of you who enjoyed The Shrine, we say thank you for rocking with us for nearly seven years! We look forward to reopening in another location -  where you and others will appreciate how we get down! Stay tuned," the email by The Shrine's owner, Joe Russo, says. 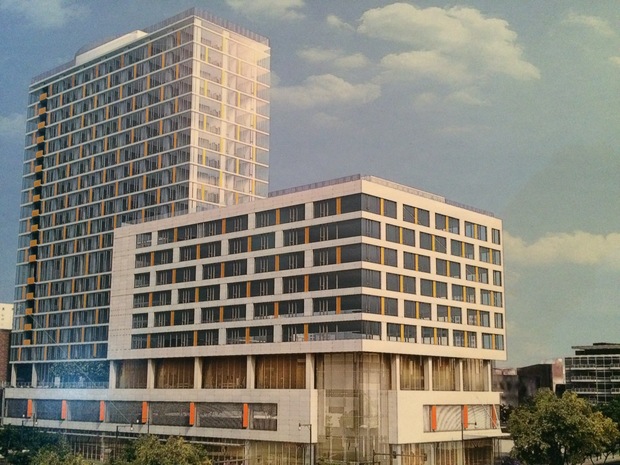 A rendering of the proposed development replacing the Shrine. [Solomon Cordwell Buenz]

Open since 2009, The Shrine has hosted major rap shows by artists including 50 Cent, Common, Kendrick Lamar, and The Roots. Spike Lee's "Chi-Raq" movie also filmed a scene at the club last year. But The Shrine has also drawn ire from neighbors who aired concerns over street fights and other incidents they believe stemmed from the club. The Shrine is scheduled for a hearing Monday before the city's department of business affairs and consumer protection.

The Shrine will host R&B singer Mya Feb. 27 and Busta Rhymes Feb. 28. But as of Wednesday the club was still promoting March shows on its Twitter feed. Russo did not immediately return messages seeking comment.

The development, led by Chicago-based Draper & Kramer Inc., will raze The Shrine and surrounding properties and include a seven-story, 144-room hotel and adjoining 19-story, 246-unit apartment tower. A Draper & Kramer executive did not immediately return a message seeking comment.

"The Shrine was open to all, but set out from its inception to cater to the underserved Caribbean, African & African American clientele," Russo's email reads. "The Shrine is both nationally and internationally regarded as a unique (and often imitated) entertainment venue that will be greatly missed upon shutting its doors."