SOUTH LOOP — Amid all the big developments slated to change the area near McCormick Place, the city plans small street tweaks there to make visitors feel welcome.

Repaved roads and sidewalks, more trees and plants, and decorative light poles welcoming guests to Chicago's historic "Motor Row" are all part of the plan, according to renderings the Chicago Department of Transportation shared last week with South Loop neighbors.

The improvements would stretch from State Street to Indiana Avenue along 23rd Street, and on Michigan Avenue near Cermak Road. Work on 23rd Street is set to begin this spring.

The plan for new trees, sidewalk planters, and other improvements along 23rd Street. [Chicago Department of Transportation]

The project is the latest step in the city's plan to transform Motor Row, a landmarked stretch of South Michigan Avenue that got its name from flashy auto showrooms a century ago, into an entertainment district. A new CTA station opened last year at Cermak and State, and construction of a new hotel and basketball arena near McCormick Place — the nation's largest convention center — is underway.

The plan also calls for new "gateway" art at Michigan and Cermak welcoming guests into the district. The concepts, though preliminary, are all inspired by vintage tourism posters from the turn of the 20th Century. Plans also include a wider sidewalk with public seats and new light poles.

The city is working with the Illinois Department of Transportation on the Michigan Avenue project, and construction is set to start next year. An IDOT spokesman did not immediately return a message seeking comment.

The cost of the Michigan Avenue project is unknown. The 23rd Street project will cost about $1.3 million, a sum that will be paid by the city's department of water management and tax-increment financing funds, said Michael Claffey, a city transportation spokesman.

Check out more renderings of the project in the slideshow above or scroll down below: 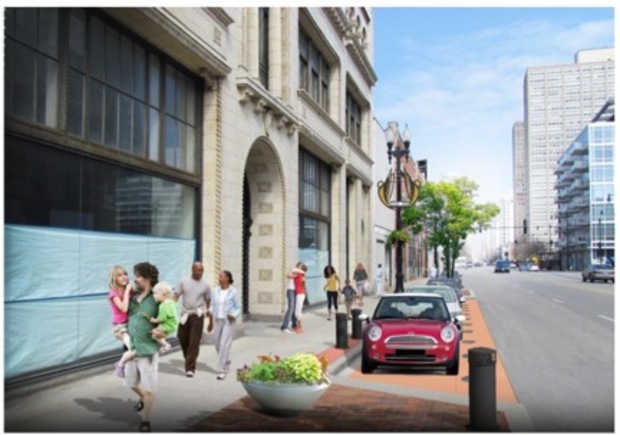