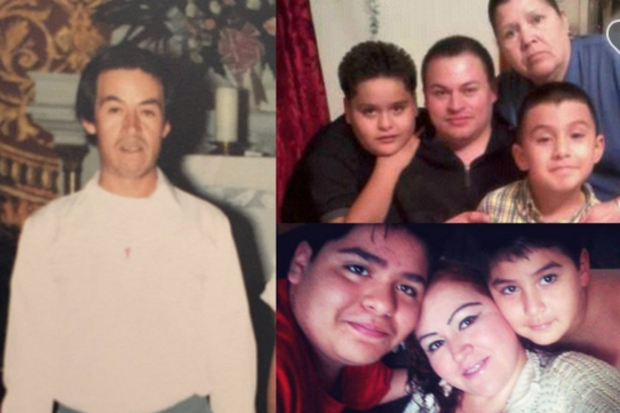 CHICAGO — The family of the victims of Chicago's most deadly violent incident since 2003 are picking up the pieces in Texas and Chicago Friday after all six members of a Gage Park family were found dead at a "gruesome" crime scene in their home.

Autopsies on Friday afternoon revealed how the six members of the Martinez family were killed, though the Cook County Medical Examiner's office did not release the names and ages of the victims, pending "official" identification.

All six deaths have been ruled homicides, the medical examiner's office said.

Azucena Martinez, a niece to the slain Noe Martinez, Sr., and Rosaura Martinez, said the family first heard Thursday that there had been a murder on the California Avenue block where many relatives used to live and a family of six still remained.

Family members who had relocated to Texas began calling the landline in the Gage Park home, but got no answer.

'We were in shock'

"We were really nervous and in shock," she said in an email interview with DNAinfo Chicago.

Later Thursday, the family received a call from a local reporter inquiring about the murders. That's when they started "fearing the worst," Martinez said.

They searched online for more news, and found confirmation that the murder scene was at the address where their family stayed.

"We were in shock, we had questions," she said. "We were very upset."

Martinez described her slain relatives were "quiet," caring and and sincere. She said Leonardo, 13, was "outgoing" and that Alexis, 10, loved soccer.

Noe Martinez Hernandez Sr.'s employer, United Services Company, where he worked as a window washer at O'Hare, described him as "a hard worker and good employee [who] was well liked by his co-workers" in a statement. They said grief counselors would be onsite Friday.

Martinez Hernandez also owned and maintained a Southwest Side residence, neighbors said, and his tenant described him as a caring and sympathetic landlord. 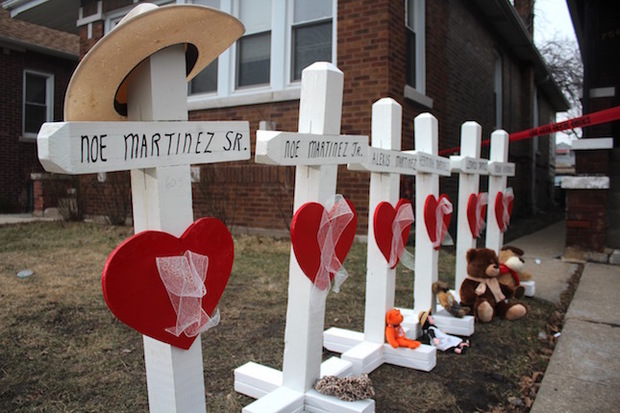 Loved ones erected memorials to the six members of the Martinez family outside the Gage Park home where they lived. [DNAinfo/Alex Nitkin]

He was a "really, really nice man," said Victoria Olvera, 28, who rented a house from Martinez Hernandez. She said that when she moved in two years ago and couldn't afford the security deposit, he waived the expense for her. Earlier this week, she called to talk about February's rent check, but her messages went unanswered.

A GoFundMe page was set up for the family, raising money to send their bodies to Mexico for a funeral. As of 11 am, $4,200 had been raised.

The family's niece said friends and family have been left "heartbroken and speechless" after hearing of the news that three generations of the family were slain in their Gage Park home.

"The household was nothing but a loving and gentle family that always kept quiet," wrote the woman on the GoFundMe.

"In the time of need the family asks for help in both prayers and donations to help send the bodies back to Mexico, where they would’ve wished to be buried. The donations given will help send the bodies to Mexico and help with the funerals and burying ceremonies of all six members. God bless everyone, every little bit helps and is appreciated greatly."

Clues from the crime scene

When police found the bodies of six members of a Gage Park family — including two boys ages 10 and 13 — all of the doors of the bungalow were locked, and there were no signs of forced entry, the city's chief of detectives said Friday.

Interim Police Supt. John Escalante said at a press briefing Friday that "there's nothing at this point that leads us to believe this was a random act."

During an earlier morning press briefing, Chief of Detectives Eugene Roy didn't reveal if his investigators have a suspected motive in the case, but he did note the home wasn't ransacked, the doors were locked and there were no signs anyone broke in.

"The victims suffered blunt trauma which leads us to treat this case as a homicide," Roy said before a police graduation ceremony at Navy Pier, miles away from the gruesome scene that rocked the quiet Gage Park neighborhood Thursday afternoon.

Contrary to early reports, Roy said the victims "were not bound and there did not appear to be any ransacking of the house."

The murders represent the city's most deadly violent incident since 2003. 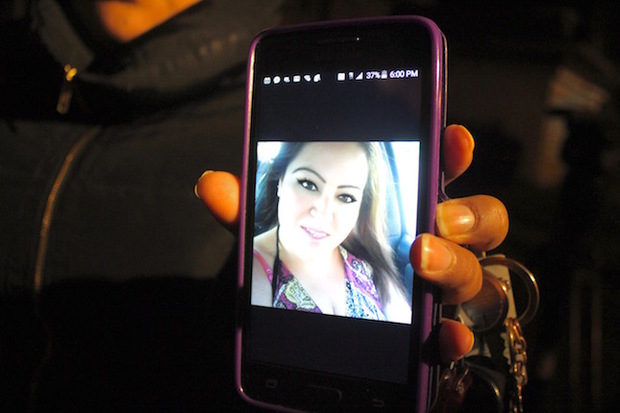 A friend holds up a photo of Herminia Martinez. Cook County officials said according to an autopsy that she was shot and killed. [DNAinfo/Alex Nitkin]

In what one officer reportedly called the most "gruesome" thing he's seen on the job, officers discovered the bodies inside bungalow in the 5700 block of South California Avenue at 1:05 p.m. Thursday. Though police said there's no immediate threat to the area, 8th District officers are increasing their presence as a precaution.

"I've been doing this job for about 30-plus years and it takes a toll on you," Roy said. "We recognize the toll it takes on our people and we get programs in place after incidents like this. We give our people a chance to decompress and talk about what happened."

Chicago Police spokesman Anthony Guglielmi said at the scene Thursday that police believe all six people lived in the house.

A source told DNAinfo that the victims were found on different levels of the house, and some were bludgeoned and stabbed. Roy confirmed Friday that there was evidence of blunt trauma.

"This is very early, very preliminary...but there are signs of trauma [to] the bodies. ... We are still working to identify the bodies that were inside the residence," said Police Supt. John Escalante said Thursday. "We are taking our time going through the residence so as to collect as much evidence as possible. Crime lab personnel are at the scene right now."

A coworker of a person who lived in the home became concerned after he did not show up to work for two days, and called police for a well-being check. Officials arrived at the scene and saw an unresponsive person inside the home before forcing their way in, Guglielmi said.

According to a law enforcement source, the Fire Department arrived first, popped the door open and police went in. They then started finding bodies with stab wounds.

A ripple through the neighborhood

Neighbors said the area used to be safer and more family oriented, though at least one long-time resident said that gang activity had been on the rise in the last five to 10 years.

Markita Williams, a neighbor of the victims, said her son is friends with a young boy who lives in the home, and that she's lived near them for about three years. 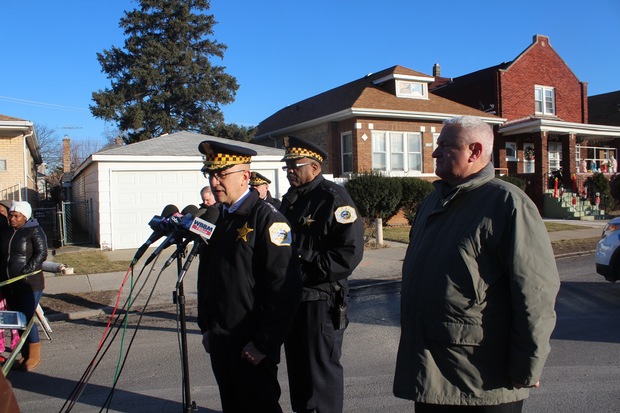 On Wednesday, she knocked on their door to request that the "grandfather move his truck." No one answered, which she found "weird." Williams said the family's curtains have been drawn for days, something that was uncharacteristic, and her children haven't seen anyone who lives there since Monday.

Florentino Carrazo, who was near the scene Thursday night, said he worked with a man who lived in the home where the victims were found. They cleaned windows together at O'Hare.

Yesterday, the man was supposed to bring tamales for his coworkers. He never showed up. "It was very unlike him not to show up without saying anything. He's a very good worker." They called him repeatedly, and he never answered, Carrazo said. When he didn't show up a second day, his boss called the police.

"We was a very good man, and a good worker," Carrazo said. "He was friendly, and always said hi to people when he saw them. This is very sad."

Another colleague of Noe Martinez Jr. at O'Hare said workers were surprised when he missed work without notifying anyone.

"He was never late or absent. That's why we called when he didn't show. ... It was really sad. He was pretty straight kid, never in any trouble."

At the Gage Park Public Library, two blocks up the street, a security guard told employees about the police presence outside Thursday afternoon.

"It's always been quiet around here, very family-oriented. It's very disturbing, especially when we found out a child was involved," said Tina Morton, a library employee.

Near the corner of 57th and California, 13-year-old Hugo De La Torre fielded a barrage of question from reporters. On a nearby porch, his mother cried and made calls on a cell phone. She was friends with one of the victims, and her two sons had visited the house a few years ago.

Hugo said he doesn't remember much of the house and felt weird knowing people were now dead inside: "It's sad and crazy," he said.

Listen to scanner audio of the incident:

Neighbor Lettie Magas, 63, said her family has been living on the block for 40 years, and though she feels safe during the day, she rarely ventures out at night anymore.

"My daughter is 20, and she doesn't even feel safe jogging around here. There are a lot of gangs around Gage Park High School. I think about moving sometimes, but it's hard in this economy," Magas said. "Things have just been getting worse and worse around here for the past 5 or 10 years. I hear the sirens all the time."

In police scanner audio from Thursday afternoon, an officer called in to the dispatcher, "Roll ambulance this way, we got people passed out, I don't know if they're dead or what." (Scanner audio is not confirmed by official sources.)

"Yeah, send the sarge over here, this is a bloody mess," the officer said, before he said he and his partner forced entry through the back of the house.

"This guy looks like he's been stabbed multiple times," the officer said when they found the first victim. Later, officers called in a second victim: "Yeah, there's a victim back here. It's a female, older female."

The last known violent incident with six or more victims in Chicago was in 2003, when a Canaryville gun battle with police ended in the deaths of seven people, including that of gunman Salvador Tapia.

In April 2010, James A. Larry of Madison, Wisconsin, killed five of his family members in their Chicago Lawn home. He was sentenced to life without parole.

In July, a mother and her three children were found dead in a Chatham home. All four deaths were ruled homicides by the Cook County Medical Examiner's Office.