Teachers Union Calls Out CPS 'Lies' in Letter to Parents

CHICAGO — The Chicago Teachers' Union traded more barbs with Chicago Public Schools on Thursday, accusing the district of promoting "lies" in a letter sent to parents that they say blames teachers for the district's economic problems.

The letter, which school principals asked teachers to distribute to students to take home Wednesday, is authored by top CPS executives and says the rejected contract would have "raised teachers’ pay, prevented teacher layoffs for economic reasons, and provided for autonomy for teachers in their classrooms."

"It was an agreement worked out with CTU leadership and that was good for teachers, good for parents and most importantly, good for students," the letter states.

On Thursday, the union disputed some of the claims in the letter.

"This is a classic case of lying by omission," said Jackson Potter, a CTU staff coordinator who's involved with the teachers' contract negotiations.

Notably, the union disputes the school district's claim that the contract offer would have prevented job losses and increased teachers' pay.

So thankful our students' families do not fall for CPS' lies, half-truths and misinformation #faircontractnow pic.twitter.com/z2CH7WDqkd

Potter said while CPS offered teachers a 2.75 percent pay raise that would take effect in the second year of their four-year contract offer, those raises would have been negated by teachers' increased pension and health insurance contributions. Factoring in those costs, Potter said teachers would actually lose 1.55 percent of their pay if they accepted the contract Monday.

Potter also said the rejected agreement would have required the early retirement of 2,200 teachers.

"That's a bitter pill to swallow," he said.

In the past, teachers have also distributed memos to students with their positions on CPS issues at school.

Some teachers made their own edits to the letter after receiving it and shared a version on social media: 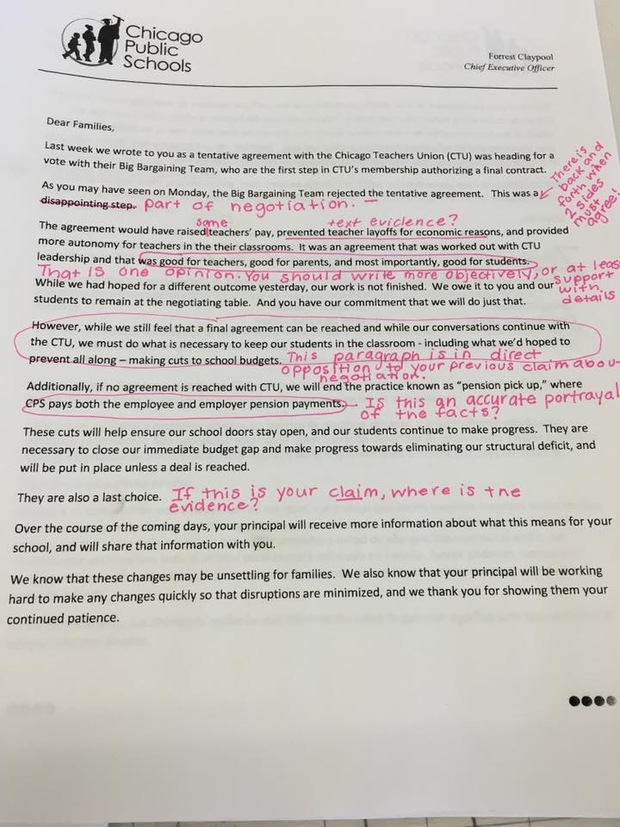 Emily Bittner, a CPS spokeswoman, told DNAinfo Chicago in a statement that reaching an agreement that "protects classrooms, treats teachers fairly and helps our students continue to achieve is of utmost importance to CPS."

"We know our work is not finished, and we are committed to building a mutually respectful relationship the CTU in this contract and working at the table around the clock so Chicago children can remain in the classroom," she said.

Bittner also shared a breakdown of the rejected contract's pay increases, which include "steps and lanes," or annual raises for teachers based on their experience and education:

Potter acknowledged that, including steps and lanes, teachers' pay would be "slightly" increased, but not until the fourth year of the contract, according to his calculations.

"It would also be very different in how other districts compensate their teachers," he said. "Even if you wanted to count 'steps and lanes' as salary in a traditional sense, years two and three people are seeing a decrease."Though Potter called the contract negotiations "substantive," the rhetoric from both sides of the bargaining table has ramped up since the union said it would reject the district's contract offer Monday. CPS, led by Forrest Claypool, has since said they will ask schools to collectively make $75 million in new cuts, which teachers plan to protest at 4:30 p.m. Thursday near the Chicago Board of Trade Building at LaSalle and Adams streets.