The Most Lucrative Panhandling Spots Downtown, According to Panhandlers

By David Matthews |&nbspFebruary 1, 2016 5:31am
@DavidLMatthews
Twitter Facebook Email More
Curtis Lockett said the clerks at a 7-Eleven store in the Loop are kinder to him than most.
View Full Caption
DNAinfo/David Matthews

DOWNTOWN — A man who calls himself Blue said he served 39 months in Afghanistan.

Now he sits in a wheelchair at Michigan Avenue and Randolph Street, where for the past five months he's begged strangers for money — at least when the office tower nearby doesn't tell him to scram.

"In a uniform I'd be shaking hands and kissing babies," Blue, 38, says. "But because I'm homeless I'm considered a drug addict or an alcoholic or someone with mental disabilities or schizophrenia; I'm [considered] a scumbag."

Blue is just one of the many people who camp Downtown every day, hoping to gather enough loose change to pay for a meal or a night's stay in a cheap hotel instead of on the street.

A panhandler's location matters, so much so that two men took the Cook County Sheriff to court over the right to beg in Daley Plaza, 50 W. Washington St. A judge agreed last week the men's First Amendment rights were denied by the sheriff's officers guarding the public plaza in the heart of the Loop, and the panhandlers were awarded $1,500 each for their lost time.

That got us thinking: What are the most lucrative spots to panhandle Downtown, and what makes them the best? DNAinfo Chicago took to the corners to ask.

Deciding where to beg "means the difference between eating and not eating," said Reggie, who said he makes $40 on an "average day" in front of a McDonald's near Willis Tower. "It means getting somewhere to rest for a couple nights or not. It means everything."

Curtis Lockett has been homeless for five years, the last two posted in front of a 7-Eleven on Michigan Avenue. He said he starts his days at 10 a.m., and by the time he's done usually makes between $15 and $20. There's a "No Loitering" sign on the store behind him, but Lockett said the clerks are nice.

"They treat me better" than other places, he said.

Roggie was sitting next to Blue one afternoon last week at their corner near Millennium Park. Roggie, who's been homeless for 14 years, said he doesn't like sharing corners, but this one is the best in the city to ask for money, he thinks. He said he still only makes between $23 and $25 on a usual day.

"I’m not gonna get mad or nothing," Roggie says. "Since I been here I ain’t never had nothing like this on my life. I know two men on too many corners." 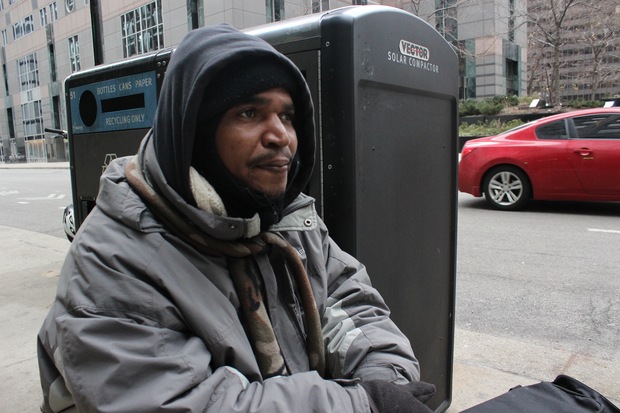 But the deal with panhandling, everyone we interviewed said, is there are no usual days. These people all have their preferred spots, but often have to move if traffic is slow, or a neighboring business makes them leave, or another panhandler has already staked out their corner.

"Sometimes it’s nothing. Sometimes it might be $100. You never know," said Michael, who likes to stay in front of a Walgreens near the James R. Thompson Center and its busy Clark and Lake CTA station.

People who are homeless have always been stigmatized, but some groups say it's worse now than ever. The Chicago Loop Alliance, which provides services on State Street in the Loop, debuted a campaign last year urging tourists and others to give to selected charities instead of panhandlers. Despite the alliance's good intentions, the campaign was criticized by homeless advocates. The campaign is still running.

Last fall, the city distributed a detailed memo to people living in an Uptown viaduct on what they could keep in the property, though those terms were negotiated with the Chicago Coalition for the Homeless.

The rules panhandlers keep (or not) amongst themselves vary. Some say you have to respect the person who's been working the corner the longest, while others say it's first-come, first-served. Some think certain corners are more lucrative than others, but others say it doesn't matter, believing other factors like the weather, or how distant you are from competing panhandlers, or your "shtick" are more important.

RELATED: Downtown Man Gives Up Life of Crime for One Under the Shade ... A Lampshade

"There’s thousands of corners here in Chicago, you can literally sit anywhere and make money," said Daniel, 25, who was sitting near the State and Lake CTA stop last week. "It's just a matter of getting in the right flow." 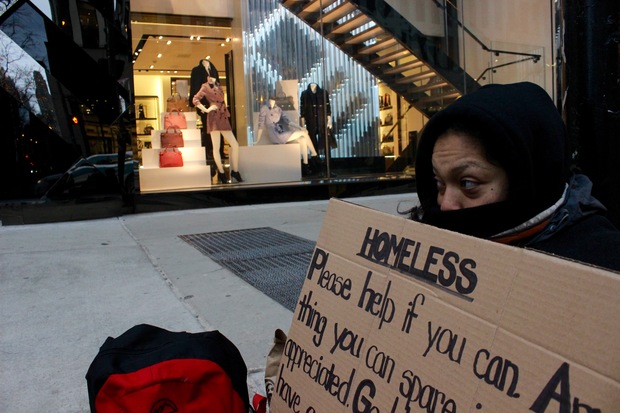 The generosity of passersby isn't the only factor in choosing a place to panhandle. Jessica, 27, has been homeless since she left her abusive ex-husband two years ago. She stays in a tent city near the Old Main Post Office, but works the Magnificent Mile, where she said she doesn't even make $10 a day. She returns to the spot every day, not because the tips are generous, but because she thinks the police nearby will keep her safer there than anywhere else she can go.

"That's basically it," she said.

Everyone mentioned different reasons for being on the street, but they all offered the same solution: more jobs, and more housing. Though City Hall touts an accelerated pace of affordable housing development, the more than 600 such units under construction right now across the city pale in comparison to their need. More than 282,000 people registered for the Chicago Housing Authority's waitlist in late 2014, the last time application figures were reported. The authority says there are more than 120,000 people currently on the waitlist, though not all of them are homeless.

So while Reggie, the man who camps by Willis Tower, is glad the Daley Center panhandlers won access and $1,500, he's looking for something more solid.

"Lawsuits are good, but people need housing," he said.