Chicago's Drinking Water Cribs, Where The Magic Has Happened for 150 Years

CHICAGO — Every time you take a drink of Chicago tap water, you can thank those weird water cribs miles off the shoreline in Lake Michigan.

Using under-the-lakebed tunnels and pipes, the cribs have supplied the city with its drinkable water for almost 150 years — saving Chicagoans from downing heavily polluted water that flowed from the Chicago River near the shoreline.

"It was a remarkable achievement. We had one of the great lakes in the world at our doorstep, but we couldn't tap into the water because of the pollution," said Libby Mahoney, senior curator for the Chicago History Museum. "It made Chicago a livable city. It was done by a little-known engineer long forgotten except by a few people. The story should be better known."

That engineer was Ellis F. Chesbrough, who dreamed of offshore cribs sucking clean water out of the lake and pumping it through underground tunnels into city pumping stations. The first tunnel — where men dug clay and dumped it into a cart pulled by a mule — was completed in 1866, according to the Tribune. The crib, made of wood, began operation a year later. It was constructed on land and floated into the water, Mahoney said.

"It was quite an engineering feat," Mahoney said.

There are water cribs currently still in the lake, stretching from Wilson Avenue to 68th Street. They are 2-4 miles off the shoreline. Chicago Water Management public relations manager Gary Litherland told DNAinfo Chicago he can't say which ones are operational or where the ones that do work send their water to. That's a "security issue," he said.

In 2004, Gapers Block reported the active cribs were: the Wilson Avenue crib; the Four Mile Crib; the William E. Dever Crib; and the 68th Street crib. It's certain at least one of them pumps water into James W. Jardine Water Purification Plant, which was completed in 1964 and is the largest plant of its kind in the world. The Sun-Times reported in 2014 that the plant is one of Chicago's main terrorist targets.

The Tribune repeatedly tried to gain access to the cribs in 2007, but was denied. The cribs used to be manned by "crib keepers" until the 1990s, according to the Tribune, but now they're automated with cameras and motion sensors.

That doesn't mean the cribs don't have visitors. In fact, many birds make their home at the cribs. That includes peregrine falcons, which have thrived and hatched chicks on the cribs. Last year, a pair of falcons on the Wilson Avenue and 68th Street cribs hatched a combined five chicks. 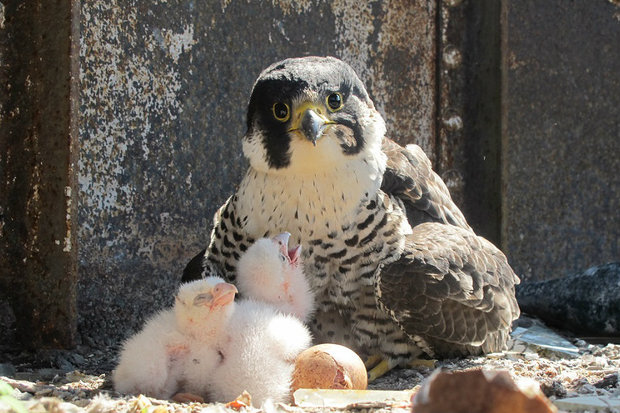 Peregrine falcons have been nesting at Chicago's offshore cribs for the last two years. (Stephanie Ware)

"You can't have a livable community unless you have a viable source of healthy water," she said. "Can you imagine tapping into the Chicago River at this point? You can't do it." 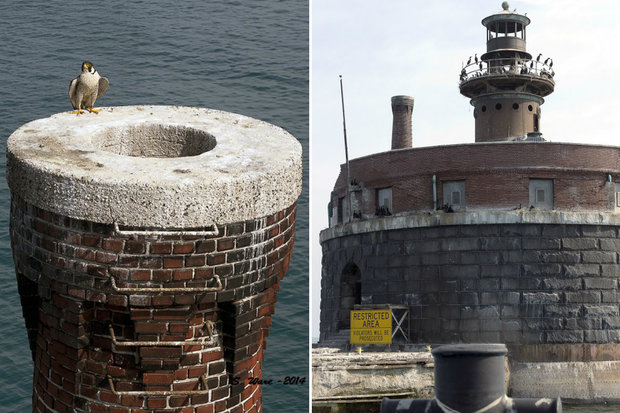 Peregrine Falcons have been nesting at Chicago's offshore cribs for the last two years. (Stephanie Ware)