WASHINGTON HEIGHTS — A meeting on the future of the Carter G. Woodson Regional Library turned tumultuous Thursday night after no Chicago Public Library officials showed up.

More than 100 disgruntled people from the 21st Ward expressed their frustrations over the state of the library where scaffolding has reportedly been set up out front for a dozen years.

Ald. Howard Brookins (21st), Trinity United Church of Christ, and the nonprofit Endeleo Institute hosted the community meeting at the library, 9525 S. Halsted St. The goal of the meeting was for the community to offer input on what kinds of repairs and upgrades are needed at the library.

But the night took a different turn when no Chicago Public Library representatives showed up. 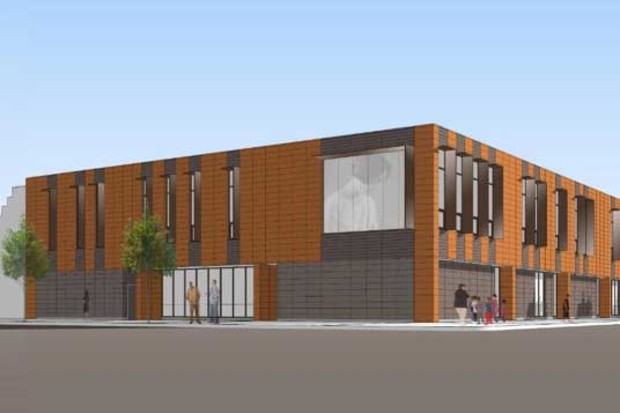 This is what the Southeast side of the library would look like after exterior repairs are made. (Carter G. Woodson Library)

“We’re here tonight. Shame on him for not coming,” one person in the crowd shouted to the alderman when told that library commissioner Brian Bannon wasn’t coming.

“If this was Lincoln Park or the Gold Coast …” another person said before trailing off.

“Totally disrespectful that these individuals didn’t come,” someone else shouted from across the room.

Brookins said it was “disappointing and disheartening” that no one from the Chicago Public Library showed up.

Chicago Public Library spokesman Patrick Molloy said Friday that the library fully supports the project. But he said there must have been a misunderstanding and library officials didn't commit to attending the meeting.

Molloy said that the only thing that was to be discussed, according to the invitation, was the Community Benefits Agreement. The library has no authority over hiring and contracts, he said, adding those areas fall under the authority of the Department of Procurement Services.

Richard E. Butler, first deputy procurement officer with the Department of Procurement Services, did attend Thursday's meeting, but he said he was unable to answer most of the community’s questions and apologized repeatedly. Butler offered to take down resident's contact information or give them email addresses for the appropriate city officials.

Molloy claimed that Thursday night's discussion didn't stay on topic, which is why the representative from procurement wasn't able to answer all of the questions presented. Molloy said Bannon did attend a meeting in December, along with the Department of Fleet and Facility Management.

But Ald. Brookins said library officials should have been at the meeting. Library officials "are going to get an earful not only from the community, but from me,” he said.

“I’m disappointed the appropriate people weren’t here to be able to answer the questions that the community had for them,” he said.

"You have a meeting, people take their time, have expectations and you just don’t send anybody. ... I can see if something catastrophic happened, but you just blew it off. Who does that?” said one of the attendees of the meeting, Michele McGee of West Chatham.

Woodson Library Director Rodney Freeman was present, but he said he couldn’t answer questions about the construction project. Molloy said they asked Freeman to sit in on the meeting and address questions if they were related to library services.

The 41-year-old library is in need of major work, the community and alderman said. Brookins said scaffolding has been outside the front of the building for 12 years.

There are plumbing problems and heating and air conditioning issues, and the parking lot needs to be resurfaced because it floods when it rains, Brookins said.

This is all work that can be given to local contractors who live in the community, said the alderman.

Members of the Endeleo Institute, a community improvement effort associated with the Trinity United Church of Christ, say their main concern is there is a guarantee that minorities from the community will get hired.

Robert Wordlaw, an Endeleo board member, said that the best way to ensure jobs for community members is to create a Community Benefit Agreement. Such agreements, according to the Chicago Lawyers Committee for Civil Rights Under Law, are “contracts that detail the benefits that a developer will provide in order to secure the cooperation, or at least forbearance of, community organizations regarding the developer’s application for permission to develop a particular project.”

Maxx Boykin, 25, of Washington Park, said normal city contracts have "not actually employed people of these communities to do the work that needs to be done.”

And with the high unemployment rate for young black men, it’s important to make sure that people are getting jobs, especially young people, Boykin said.

Brookins said he wants to see the jobs given to people in the community. Modernizing the regional library, which has the largest African-American history and literature collection in the Midwest, the Vivian G. Harsh Research Collection of Afro-American History and Literature, is important.

“This place has special place in my heart,” he said. “We want to bring it back to its splendor.”

Melvin Thompson, executive director of the Endeleo Institute, said he was surprised the library was allowed to get in the condition it's in now and wants to see it restored.

"I see this library as the cornerstone," he said. "This will jump-start other economic activities [in the area]. I want it to be a 21st century library."

A date hasn’t been set for the next community meeting, but Brookins said he’s working on getting the right representatives to commit.