Being Homeless Changed This Chicago Organizer's Life — For The Better

By Josh McGhee |&nbspJanuary 27, 2016 5:34am
@theVoiceofJosh
Twitter Facebook Email More
Jahmal Cole, founder of My Block, My Hood, My City, said he spent most of his youth homeless in Texas and Chicago.
View Full Caption
Courtesy of Ramon Forte

UPTOWN — Over the last few months, Jahmal Cole has taken South and West side teens to explore different parts of the city they wouldn't normally be exposed to as part of his youth outreach program called "My Block, My Hood, My City."

Normally, the group goes on a field trip, sampling new foods and talking to local business owners in unfamiliar neighborhoods. But when they visit Uptown on Sunday for their "inter-connectivity rally," their mission will be a bit different. They'll be tackling an issue Cole has dealt with since he was a child — homelessness.

"We spent like 2½ years living in shelters, rundown hotels and motels ... crackheads coming to the window. That’s how I grew up," said Cole, 32, of Chatham.

In October, the group took about 20 kids from Pullman and Roseland to Edgewater to make jewelry, visit a frozen custard shop and eat Ethiopian food. And in December, the group explored Pilsen.

This weekend's trip is about serving others, Cole said.

"Normally, we take them to do two activities and eat a different food they’ve never tried," Cole said. "We’ve been taking them on a lot of cool field trips or explorations, but also part of our model is social, so I wanted them to do something social and give back.  I want them to learn how to give back to those in need." 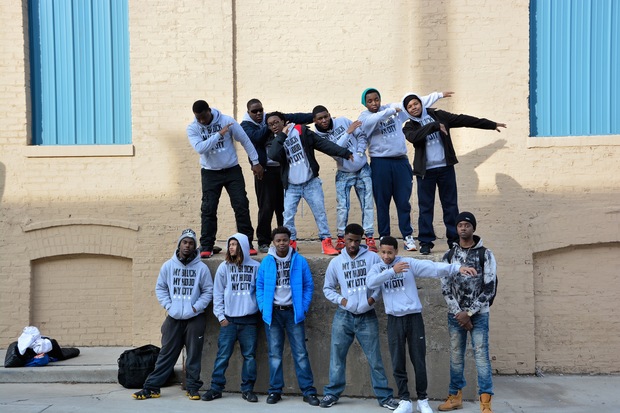 My Block, My Hood, My City will pass out 100 hoodies and 100 meals in Uptown this weekend. [Courtesy of Ramon Forte]

More than a field trip

At 2 p.m. Sunday, the group will hold its rally at the viaduct near Wilson Avenue and Lake Shore Drive. During the rally, organizers from Cole's group and the Chicago Coalition for the Homeless will speak. The group will also give out 100 of its hoodies — typically priced at $65 — and more than 100 meals courtesy of Mama Osas African Restaurant at 1027 W. Wilson Ave., according to the Facebook event.

Helen Obaseki, owner of Mama Osas, was excited to serve her chicken and jolaf rice with plantains to those in the community truly in need.

"Feeding the homeless people is really good. Most of them may eat only once or twice daily, and they don't get to eat enough. You'll be in their memory for a long time," Obaseki said.

Cole has spent a few weeks in Uptown talking to the homeless under the viaducts about their needs during the winter. While some activists are tackling their shelter needs by starting a Gofundme to buy tents for the homeless, Cole's group will focus on bringing them hoodies and food, and changing their own perceptions about the North Side.

"[The kids'] whole mindset is everything up north is ... people are balling, that they’re rich basically. But there’s a homelessness issue that’s serious in Uptown," Cole said. "I just want to get them in the mood that whatever happens in Uptown should matter to them even though they live in Pullman."

As a child, Cole spent time homeless in both Texas and Chicago. That time shaped his life from college to mentoring to founding the program, he said.

"I remember what it was like when I was 11 years old and homeless. I lived in the back of a U-Haul truck for like five months. We used to have tie a belt to the outside and leave a little space for air.

"We had the U-Haul for so long, U-Haul came and took the truck back from us," he said. "We spent a lot of our nights walking around looking for quarters and dimes. Dinner for me was Little Debbie snacks. I spent the majority of my days sleeping on buses, sleeping on trains or sleeping in shelters."

For Cole, eating in shelters was embarrassing because his classmates would be handing him his dinner plates. Later, he would lie to them to hide his circumstances, telling them to "drop me off at the corner store and my dad will be picking up," even though they knew he was homeless, he said.

He also never got a chance to really develop relationships with the classmates because he was constantly moving.

It wasn't all bad though. Constantly moving helped inspire My Block, My Hood, My City, Cole said.

"I was born traveling back and forth from Fort Worth, Texas, to Chicago. Every time someone got into an argument, I had to take the Greyhound bus by myself to stay with my dad. Then I’d be pulled back to the West Side," said Cole, adding he was about 11 when he would take the long trips alone.

"I never really got any opportunity to settle down and grow roots because every three to four months I’d be moving. But it taught me how to communicate, it taught me how to expand my world view. I love traveling. That’s why I travel to different communities now."

Using tough lessons to do good

Cole said the tough times taught him about being a mentor and seeing the bright side of a bad situation.

The gear, which bears the name of the organization surrounded by designs and symbols taken from the Chicago flag, has been a hit, with fans sharing photos of themselves modeling the merch in places as far as Sri Lanka and Switzerland.

"Those times in my life, my dad taught me what optimistic meant. He was always optimistic. I never liked that movie with Will Smith and his son ["The Pursuit of Happyness"] because he was always whining about being homeless. Because when you grow up like that. … I wanted to be strong," Cole said.

Cole said he hopes interacting with Uptown's homeless will teach his young participants a similar lesson.

"I want them to see it with their own eyes and experience giving back. Because that’ll be a better deposit to make into their life," he said.

That Castle on the Kennedy Expy. Has a New Owner ... And He's Finishing It