THE LOOP — The brand new bus lanes meant to better connect the east and west ends of the Loop appear to already be losing their distinctive red paint.

A photographer posted a photo of a Loop Link bus lane's chipping red paint to Imgur on Thursday afternoon.

The chipping lane is on Madison Street just west of Wacker Drive on the bridge spanning the Chicago River, right next to the Lyric Opera House. 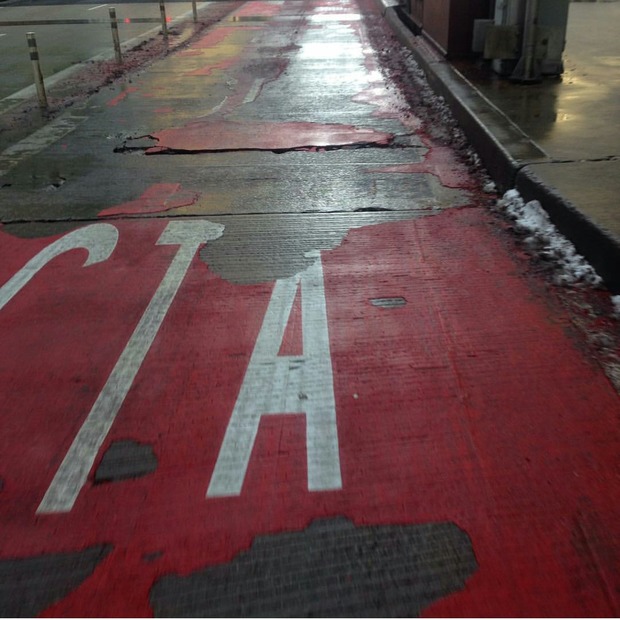 A $41 million project, Loop Link is a series of new Downtown bus and bike lanes meant to expedite trips through the Loop.

The system debuted late last month, but users have already criticized Loop Link for slow bus speeds that barely save them any time. City officials attributed the Loop Link's slow start to an adjustment period.

The new Loop Link bus lanes are on Madison, Washington, Clinton and Canal streets. Michael Claffey, a spokesman for the Chicago Department of Transportation, said this particular stretch of the Madison bus lane was colored red with a different material than red concrete, like the rest of the system, where the bus lanes look fine.

But this stretch on the bridge started chipping "not long" after it was installed, Claffey said.

"This is obviously not acceptable," Claffey wrote via email. "The contractor has been instructed to fix it as soon as possible, however, the winter weather has delayed the work."

Re-coloring this stretch of the Loop Link will come at no additional cost to the city, Claffey said.