DOWNTOWN — Residents are moving today into the new 48-story Wolf Point West apartment tower, the first of many high-rises set to change the scenery around the split in the Chicago River.

Wolf Point West, a 48-story, 500-unit tower, opened this week at 343 W. Wolf Point Plaza. But residents weren't slated to move into the new building near the Merchandise Mart until Wednesday morning, said Jim Losik of Chicago-based Magellan Development, a partner in the project.

The tower is the first of three in a $1 billion development promising to transform the confluence of the Chicago River. When finished, the three towers at Wolf Point will include 450 hotel rooms and 1,400 residential units. The project is a partnership between Houston-based Hines Interests, Magellan, the Kennedy family and other investors.

Nearby, construction is still humming on the 52-story River Point, an office tower at 444 W. Lake St.; and the cantilevered 53-story office tower at 150 N. Riverside Plaza. 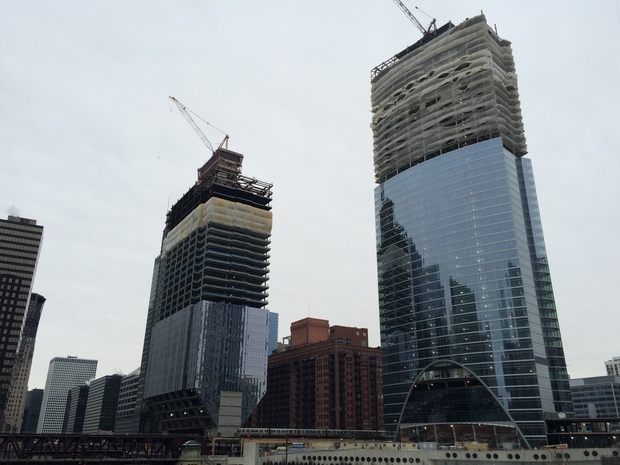 Rents at Wolf Point West start at $1,721 per month for a 493-square-foot studio, according to the building's website. Losik deferred further questions — including Wolf Point West's occupancy rate — to another Magellan executive who could not be reached.