Why Would Anyone Actually Want To Be Chicago's Next Police Superintendent?

By Mark Konkol |&nbspJanuary 8, 2016 5:30am
@KonkolsKorner
Twitter Facebook Email More
It's the city's best-paying job (if you can take no vacation, no sleep, an angry boss and more).
View Full Caption
Getty Images

CHICAGO —  The national hunt for a new Chicago Police superintendent raises a head-scratching question: Why would anyone want that job?

The search committee pitches the gig as a rare opportunity for an aspiring law enforcement dynamo to “heal, unite and protect us in these uncertain times,” as Chicago Police Board President Lori Lightfoot so eloquently put it.

But there’s just one problem with holding out hope that "help wanted" ad will actually lure a savior to secure a fairytale ending to Chicago's police misconduct horror story.

After all, this is a job that requires reporting directly to Mayor Rahm Emanuel, who on a good day can be a tyrannical big city boss with micromanaging tendencies, limited patience and an insatiable desire to reach unattainable goals.

And the ongoing U.S. Justice Department probe of our scandal-plagued Police Department — an investigation, mind you, that might lead the feds to City Hall and end in a consent decree mandating sweeping reforms or worse — could make the police superintendent job an even tougher sell to sensible and qualified law enforcement professionals.

That shouldn't scare good applicants away.

If that's you, rest assured the top cop job does have a few silver linings. (Amid constant, unrelenting thunderstorms.)

You’ll be amazed by untold acts of bravery committed by rank-and-file cops. (And consistently heartbroken by the dirty deeds of a collection of corrupt cops protected by a pervasive code of silence.)

You’ll be the highest-paid employee in city government. (A fact reporters will point out in print every time an alderman wants you fired. The last guy, Garry McCarthy, got paid $260,004 a year.)

Police headquarters office is just a short walk to Sox Park where you’ll always find an open seat. (But not much to cheer about.)

And don’t forget, Chicago has some of the best restaurants in the world. (But for you, suppertime amounts to eating lousy takeout grub at your desk between emergencies.)

You’ll certainly be welcomed by smiling faces of new co-workers, contemporaries, activist ministers, ward bosses and, of course, the mayor.  (Each of them conceal and carry long knives and sharp agendas that can and will be used against you, eventually.) 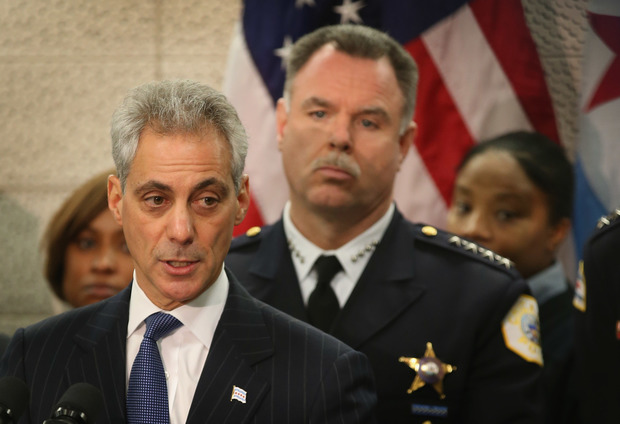 O'Hare Airport, one of the busiest in the world, offers flights to world's best spots to vacation. (Which you won't be allowed to take, so long as the feds are in town.)

As Chicago’s top cop, you’ll get invited to join very good-looking TV reporters on morning talk shows. (And eventually realize that under fancy clothes and caked-on makeup lies the blind ambition of a news assassin who wants to take you down on air.)

Let’s not forget: There’s no better place to shop for your sweetheart than the Magnificent Mile. (Which you’ll probably only get to visit when protesters take over the street, forcing the Apple Store to close up shop.)

There’s plenty of fun to be had in the summer at big-time events, including Lollapalooza, Taste of Chicago and the Air and Water Show. (By everyone but you, that is. You get to be the guy the mayor blames if all hell breaks loose.)

Chicago has phenomenal hospitals if for some reason the stress, insomnia and all that lousy takeout food leads to health problems. (But if you have a heart attack, you'll be expected to be back on the job in 24 hours like the last guy the mayor fired.)

At some point you will make progress solving Chicago’s biggest problems — senseless shootings, skyrocketing murder rates and questionable police-involved shootings in poor minority parts of town. (And immediately get criticized for not rushing to stop a rash of Northwest Side break-ins, iPhone thefts on the Brown Line or those drunken idiots who terrorize Wrigleyville after the bars close.)

Who in the world would want that job?

It's definitely a job for someone who can take a beating with a smile.

RELATED: Can a New Year Save Rahm Emanuel? 2015 Was Mayor's Worst Ever