By Linze Rice |&nbspDecember 29, 2015 6:13am
@linzerice
Twitter Facebook Email More
Reporter McKenzie Lacefield wears an elf hat while she discusses with her fellow editors and reporters how to proceed with the bell change story.
View Full Caption
Provided

CHICAGO — Student journalists at Steinmetz College Prep in Belmont Cragin didn't get the one thing they wanted for Christmas: their weeks-long report on bell changes at the school to be published and printed in their school newspaper.

It's the same award-winning student newspaper that a now very famous Hugh Hefner worked on before he graduated from Steinmetz in 1944 and went on to become the founder and editor-in-chief of Playboy.

But the Star's story about changes Chicago Public Schools made to its bell times this year never made it to print — and according to CPS no other Steinmetz Star story will ever be printed again after the school year ends.

"School newspapers provide students with a powerful voice and a positive learning experience, and we are committed to providing journalism opportunities to our students," CPS spokesman Michael Passman said. "Steinmetz High School will continue to offer journalism courses for the foreseeable future, and the Steinmetz Star will remain in operation as an online publication that will continue to serve as a valuable learning opportunity for students."

On Nov. 4, Sharon Schmidt, a Steinmetz English teacher and student adviser to the Star, said she received the last of the five installments (part of a $50,000 grant from Hefner in 2011) from Hefner in a letter emblazoned with a golden-orange Playboy heading. She and her students had been grateful for his giving, and had published the letter from Hefner in their paper. Hefner called supporting the "professional publication" a "true joy."

Hefner, who has 1.4 million Twitter followers, follows back only 21 — one of which is the Steinmetz Star.

'There Will Be No More Steinmetz Star'

But before CPS' take on the situation Monday, Steinmetz Principal Stephen Ngo had caused panic with the student newspaper staff and its advisor.

At 1:05 a.m. Saturday, Ngo sent an email to 11 teachers and counselors with the subject line "Journalism" that read, "Scratch Journaism [sic] for next year. We will not be offering it anymore. There will be no more Steinmetz Star. I'm still deciding what to do with it for the second semester."

"I can't explain his email," Passman said. "But I can tell you I've talked to senior people who would have oversight over this and they're not getting rid of the paper, that's absolutely not happening."

He said the publication would "have to go to online-only next year" due to printing costs because the grant would no longer be available.

"That's a local choice, and that would be a shame if it was only online," Schmidt said. "The school paid for the Star before the Hefner grant ... [it] was a really nice perk to the school, but the school has the money to pay for a paper. It's a disservice to students."

For 81 years, the paper had always printed in-house with lots of sweat, grit and paper. The new grant allowed the paper to blossom, and both student editors and Ngo were awarded grants for their work and support of the newspaper.

Hefner's letters to the editor and columns are printed regularly in the Star, and his donation was doled out over five years to help take the paper to a new level — including top-notch outsourced printing, cameras, computers and more.

Struggle for a Story

Just hours before Ngo's email declaring the Star and school's journalism program be shut down, Schmidt, who has also reported for the online education news site Substance News since 1997, posted a story Christmas Day detailing the paper's recent struggle to get a story about CPS printed before the semester ended. Though by that time McKenzie Lacefield, a reporter working on the story, had already posted the story on her personal website for days. She said she felt the students didn't need to wait any longer to learn about information that affected them.

For the article, students surveyed 1,390 parents, students and staff on how they felt about the school's shift to a 9 a.m. to 4:11 p.m. schedule, as opposed to the previous year's 8 a.m. to 3:11 p.m. day. Ngo was interviewed and participated in the story. 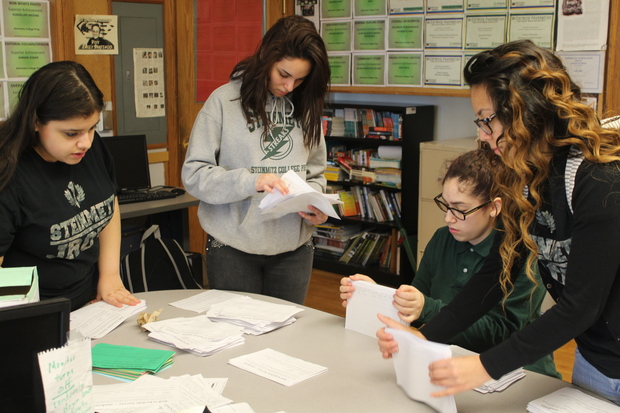 Emails obtained by DNAinfo show on Dec. 8, near the end of the paper's reporting, Schmidt reached out to Network 3 Chief Randel Josserand presenting data from the surveys that found participants categorically opposed the new start time.

Ngo said he had read the story and wanted to see a stronger representation of the later start time and suggested students interview the Steinmetz Local School Council. Ngo also requested the students speak with the school nurse about the effects of sleep deprivation. He suggested a replacement story.

CPS has never cited sleep deprivation or the benefits to later start times as reasons for their bell changes — especially with many elementary schools starting an hour earlier than the previous year, some as early as 7:30 a.m.

This summer, CPS said shifting the start time at the 77 schools would save CPS $9.2 million by reducing the number of bus shifts to two, allowing the district to cut 160 buses and 75 aides.

"With a $1.1 billion budget deficit, the bell time shift provides significant savings instead of making cuts to the classroom," spokeswoman Emily Bittner said at the time.

Schmidt said she was surprised at Ngo's decision to pull the story, something he had never done in his four years as principal at Steinmetz, despite the usual protocol of reviewing articles prior to publication.

She said her students could conduct interviews and update the story as early as Monday afternoon, but Ngo told her it would be "prudent" to prepare for the story to possibly appear in a later edition.

At the same time, Schmidt was also emailing with Josserand, who said he would meet with her students to discuss the bell time changes in person.

After hearing the story would not be printed in the coming edition, the last of the semester, she pleaded her case to Josserand.

He said he was "all for fair and balanced reporting" and supported the school's journalism department, but he did not like where the interview questions emailed to him were leading.

"The original email to me, frankly, indicated to me a clear position. As such I contacted Principal Ngo to ask for background," he wrote.

The article was not contingent upon Josserand's involvement, and Schmidt had never experienced a network administrator involved so closely with the student newspaper before, she said.

At no point did either Josserand or Ngo dispute any of the Star's facts in the story. 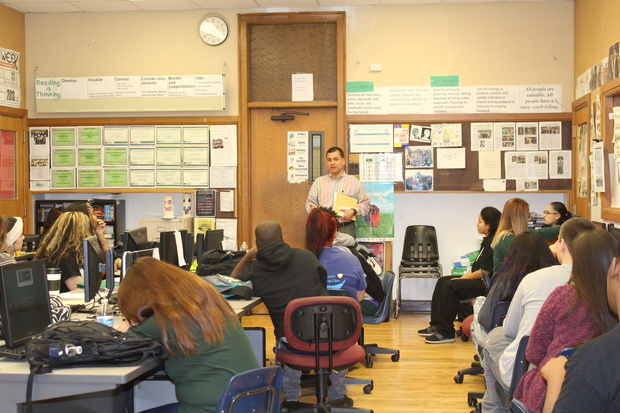 Principal Stephen Ngo met with students Dec. 16 to tell them he was holding the story until they provided additional reporting in favor of the bell changes. [Steinmetz Star/Rikeya Hargrove]

In an official grievance against Ngo over the article, Schmidt claimed, "On Dec. 10, Principal Ngo told [Schmidt] that Chief Josserand had called him in to his office and told him that the questions [Schmidt] asked were 'loaded.' Principal Ngo said he was 'furious.'"

Questions given to Josserand included,

"Do you have any comments for our readers about concerns with this year’s schedule — especially about safety, family responsibilities and employment issues? Do you think this bell schedule will remain the same for next year? How does this schedule save money for CPS? (My students read the CPS press release and have posed questions about bussing [sic] and costs to the Office of Communication as well). Are there any other things our readers should know regarding this issue?"

Documents show Ngo insisted on running another story and shelving the original article, and on Dec. 14 his decision was final.

"It's my judgement [sic] that there isn't enough time," he wrote. "I understand that you and your team have invested a great deal of work into this but my decision is final. I am not allowing this particular story to run in this week's edition. I can't be more clear. Do not print it. We can certainly discuss the story for the next edition but it will not be printed in this edition."

Schmidt believes the incident violated union and Board of Education policies by creating a "work situation," among other complaints.

On Dec. 16, Ngo met with Schmidt and her students to discuss his reasoning for pulling the story.

"He didn't really give us anything we can work with to try and improve it, and he didn't tell us what we should improve in the paper, other than you should interview the LSC ... again, and the nurse," Lacefield said.

Schmidt and Lacefield said Ngo said the story needed more reporting, but didn't offer specific examples. They had already included information from the Local School Council, which supported the change in bell times. And while they didn't interview the school nurse, they did include information from the Center for Disease Control about sleep health.

A spokesman for CPS explained, "Any suggestion that the article would be completely censored is incorrect. Rather, the article publication was temporarily postponed to challenge students to expand their reporting."

Josserand did not visit Schmidt's class and did not reschedule their interview.

Neither Josserand nor Ngo returned DNAinfo's request for comment.

Journalism One of the 'Great Things About High School'

Lacefield, a 17-year-old senior, said though this experience has been both eye-opening and "hurtful," she still wants to become an English teacher and believes her time at the Star has been invaluable.

She said she's not sure why the story was never allowed to run, and that it was never a story her editorial staff felt was "controversial" or negative.

The decision to move to an online-only news model felt like Ngo was "trying to fight censorship with more censorship," Lacefield said, an action that hinders the student voice.

"Writing is something that we've learned since we started school, and to be able to speak our opinion is just one of the really great things about going to high school," she told DNAinfo as she worked on an art project over winter break.

"It's kinda hurtful, I mean, we worked so hard on this, beyond crazy in classes ... [journalism] is really hard thing to do. It's definitely crazy how all the effects can happen, it's really strange. It's just putting out information."