Using his death at the hands of police as its catalyst, over 150 protesters marched on the Magnificent Mile shopping district Thursday afternoon, staging die-ins at intersections and forming lines to block off popular storefronts along Chicago's preeminent tourist destination.

Thursday's "Black Christmas" march was at least the second time protesters have shut down the downtown shopping district: over one thousand protesters on Black Friday successfully closed much of Michigan Avenue's destination stores as they called for change following the "cover up" of McDonald's death.

There were significantly fewer protesters Thursday, but those who showed were spirited and determined to be heard, as they often changed directions and worked to shut down intersections and stores along Michigan Avenue.

The changing of directions and splintering of the group at times forced police to scramble, as officers on bicycles were forced to speed down busy sidewalks to get in front of protesters.

Police usually try to get between protesters and the shop's doors, but were unable to do so at H&M. A man inside the store tried to shove his way through the protesters, which caused the shoving match to escalate between police and protesters.

Another angle of the clash between police and protesters outside H&M #BlackChristmas pic.twitter.com/LEsRTlys17

It did not appear that anyone was taken into custody following the scuffle. Police were unable to confirm any arrests as of Thrusday evening. Mostly, the march was peaceful, if disorganized.

"I was promised a better future in my country," said Daniel Hernandez, who stood and spoke while other protesters laid in the street to stage a die-in.

Hernandez is with the Latino Coalition for Change, who came out in force to show their support for the minority community. 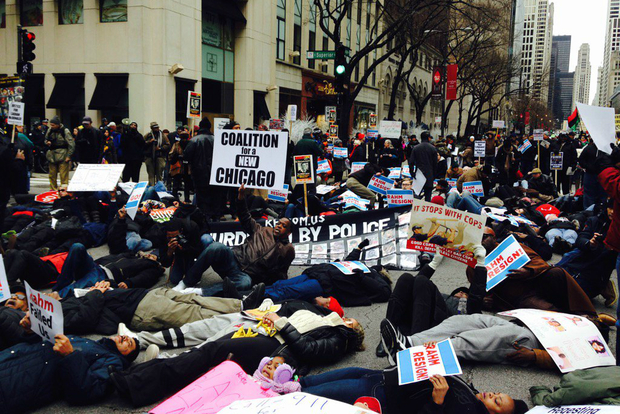 Protesters first laid in the street near the corner of Michigan Avenue and Ohio Street. As the group counted up to 16 — the number of times McDonald was shot — Andrea Thames began to cry.

"I have three sons," said Thames, who came from suburban Country Club Hills. "I can't stand to think my sons could be killed by people who are supposed to protect us.

"I just feel so awful for that child," she said of McDonald.

Die-in at Mich and Erie. Shoppers coming over, curios. Intersection is blocked but no severe jam #BlackChristmas pic.twitter.com/rLpb2HkdeU

Last time protesters took over Michigan Avenue, there was tension between shoppers and those blocking store entrances. This time, shoppers were mostly curious and enthused to see the marchers.

Natalia Garcia, 7, was confused as to why people would be lying down in  a busy street.

"This is a part of free speech," said her dad, Mario Garcia. "They're saying what they feel."

Natalia, holding her American Girl doll, wasn't convinced. "It's weird," she said. "And it's freezing."

Mario had brought his daughter from Naperville for some last-minute shopping and sightseeing. He said they were surprised to see the protesters, but glad for the teachable moment with his daughter.

"It's peaceful, sweetie," he said.

Whereas earlier protests seemed to focus on the role of police in Laquan's shooting death, Thursday's protest was directed mainly at Mayor Rahm Emanuel.

"We demand change," said Ja'Mal Green. "We're not going to stop until we get it. This is a message for Rahm Emanuel and [Cook County State's Attorney] Anita Alvarez."

Rev. Gregory Livingston, who was part of the team that organized the march, also echoed the call for Emanuel to step down.

"Rahm covered up a really depraved murder to win election," he said. "It's time he goes."

Livingston said the march was being done in the spirit of Christmas. All his group wants is peace in Chicago, he said.

"All of Chicago is our manger," Livingston said, referencing the Biblical story of the first Christmas. "We deserve to be in the inn as well."