DOWNTOWN — Many commuters took their first trips Monday with Loop Link, the city's new express buses and bike lanes aimed at easing Downtown congestion. But those getting off the bus Monday morning reported mixed results.

Monday was the first rush-hour test for Loop Link, a project meant to better connect the east and west ends of the Loop. By about 10 a.m., transportation department staff at the city's new bus stations said the service was going mostly smoothly, with just "a few" complaints about the buses' speed. All commuters asked Monday were pleased with the city's new, canopied Loop Link bus stations.

"I'm very impressed," said Steve Banghart, a suburbanite who took the new express Washington Street bus from Union Station to Clark Street Monday morning. "I don't know if my trip was faster because of traffic, but [the stop] was very well done." 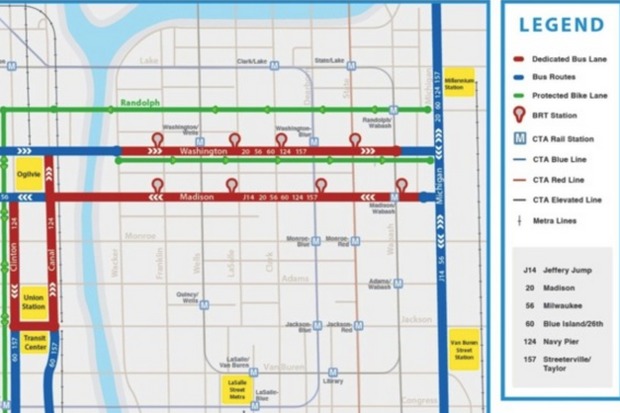 A map of the Loop Link's bus routes and protected bicycle lanes. [Chicago Department of Transportation]

Six bus routes: the J14, 20, 56, 60, 124 and 157, are now using a red, dedicated bus lane from Clinton Street to Michigan Avenue. The No. 19 bus will also use the Madison lane when there are events at the United Center. Motorists retain two dedicated lanes, and bicyclists can now use new, green, protected bike lanes on Clinton and Washington streets. A westbound bike lane is expected to be completed along Randolph next year.

Loop Link buses get an early light at affected intersections, a move meant to keep them traveling at a slow, constant pace through the Loop. The city also installed 20 new turn arrows to improve traffic flow as motorists and bicyclists get accustomed to the new system. Loop Link opened Sunday.

"We’ve got new rules of the road here, per se,” Rebekah Scheinfeld, the city's transportation commissioner, said at a news conference Monday morning at LaSalle and Washington streets. "We expect there's a little bit of a learning curve here."

Dorval Carter Jr., the president of the Chicago Transit Authority, estimated the new buses shave seven and a half minutes off a round trip from Michigan to Ogilvie or Union stations. He said 25,000 riders a day take bus routes along those streets.

“I don’t think we’re slowing down vehicular traffic,” Carter said. "I think it’s terrific if you’re on a bus. That is the point. I would encourage all the people in cars to take the bus."

The total cost of the project — which received a $24 million federal grant — was $41 million including outreach and other costs, Scheinfeld said. The city is still working on Madison Street stations, including one east of Wabash Street that is expected to open next month. The Canal Street portion of the system is expected to open in the spring, and work on two other big portions of the Loop Link: the new Union Station Transit Center and Washington-Wabash "L" Station, is ongoing. Express buses on Ashland and Western avenues opened earlier this month.

“We expect that we’ll see more reliable, efficient movement across the Loop for all modes,” Scheinfeld said. “Everyone has to do their part to make this corridor work."