Many Superintendents Have Tried To Reform the Chicago Police (TIMELINE)

Timeline of Chicago Police superintendents since 1960:

Nine of the last 14 top cops have either quit or been forced out by a Chicago mayor.

After each forced exit, the mayor at the time promised Chicagoans a reformer as the replacement. It rarely worked out that way.

The few superintendents who successfully instituted major reforms stand out because they made decisions unpopular with the rank and file and worked for mayors willing to back them despite potential political consequences.

Earlier this month, Emanuel, in an emotional speech to the City Council, promised “nothing less than complete and total reform of the system and the culture that it breeds.”

If the past is any indicator, the mayor has a tough job ahead of him. 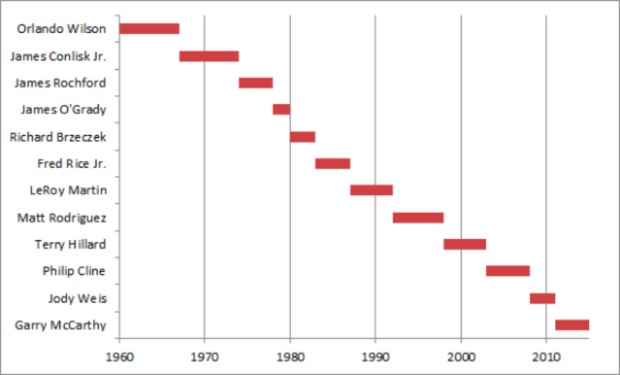 The tenures of Chicago Police superintendents since 1960. [City Bureau/Andrew Fan]

Here are a few milestones on the long, bumpy, and so far unsuccessful, road to Chicago police reform:

To protect his administration from rising public anger, Daley lured the nation’s foremost criminologist, O.W. Wilson, to Chicago. Wilson, who had the top cop job for seven years, was wary of the city’s entrenched corruption and political interference. But Daley gave him complete control over the department and unwavering support. Columnist Mike Royko put it this way in his Daley biography, "Boss": “Losing the Police Department as a political appendage might be painful, but it had to be done to save the Machine.”

Fred Rice, who served from 1983 to 1987, had some success reforming the mostly white Police Department. Rice, an experienced commander, had a veteran’s feel for the department and a mayoral mandate to shake up the department.

With Washington's backing, Rice stood up to rank-and-file dissent when officers slowed ticket-writing in response to the racial integration of police patrols. During Rice's tenure, tensions between the police force and minority communities seemed to ease. For instance, the department's use of firearms fell considerably, as did disorderly conduct arrests, which were a source of tension in minority neighborhoods.

* In 1997, former mayor Richard M. Daley accepted the resignation of loyal top cop Matt Rodriguez, who ran the department from 1992 to 1997, amid public outrage over the superintendent's alleged ties to a convicted felon, as well as allegations of police corruption and brutality under his watch.

Daley convened a blue ribbon committee after forcing Rodriguez to quit. That led to the creation of an early warning system to catch and retrain problem officers before they committed major offenses. (A recent analysis found the system doesn't do a great job identifying troubled officers. The report found the department's early warning system identified only 6 percent of officers with more than 10 civilian complaints. For example, Jason Van Dyke, the officer charged with murdering Laquan McDonald, had 18 misconduct complaints during his career.)

Weis, who served from 2008 to 2011, was the first outsider to head the force in 50 years. It didn't take long before he upset the police union when he refused to back officer Bill Cozzi, who got caught on videotape beating a hospital patient handcuffed to a wheelchair.

That led to a federal investigation that resulted in a civil rights charge. The Fraternal Order of Police issued a vote of no confidence against Weis, declaring the department to be in “complete meltdown." In 2011, Weis stepped down after Emanuel, then the mayor-elect, made it clear he would not retain him, becoming the shortest-serving superintendent in over three decades.

* In 2011, Emanuel appointed Garry McCarthy as his superintendent. He served until earlier this month when the mayor fired him. Emanuel said McCarthy became a "distraction" in the wake of the Laquan McDonald shooting.

Emanuel's next superintendent will face close scrutiny by a wide range of stakeholders.

While simply replacing the superintendent hasn’t always led to meaningful reform, history says there might be hope if Emanuel is willing to empower the new superintendent to make sweeping changes and offer his unwavering support.

This report was published in collaboration with City Bureau, a Chicago-based journalism lab.

Timeline of Chicago Police superintendents since 1960: