Boys Get Chance at 'Becoming a Man' By Looking Within, to Each Other

By Linze Rice |&nbspDecember 17, 2015 5:47am
@linzerice
Twitter Facebook Email More
Antonio Thomas, originally from Milwaukee, said he wants to give his group of seventh- and eighth-grade boys the same type of loving, supportive environment he had growing up.
View Full Caption
DNAinfo/Linze Rice

Now imagine being a young boy of color and your father, or brother, or uncle, or cousin is locked up, or gangbanging, or dead.

That's the reality for many young men across the city, but in several neighborhoods, including Edgewater, a program called "Becoming A Man" is helping to teach those boys to love and respect themselves and each other so they don't end up in the same situation.

"They really talk through what they're going through being a seventh- and eighth-grader, and just how to deal with their emotions, the things that are going on in their lives — which really helps prepare them for when they're outside of the school building," Edgewater Ald. Harry Osterman told DNAinfo.

Thomas works for a company that is contracted by Chicago Public Schools across the city to mentor and provide guidance on six core values: integrity, self-determination, accountability, positive anger expressions, respect for womanhood and visionary goal-setting. Students attend during an elective class such as art or music.

They get lessons in "men's work," defined by Thomas as "pushing the basic thought process of what men in our society think being a man is."

Earlier this week, nine students at Swift met for a 50-minute session talking about integrity.

One-by-one, they checked in with "Mr. Thomas" with a system known as PIES — each boy describes in one word his physical state, what's on his intellectual mind, how he's feeling emotionally and who or what he feels connected to spiritually that is "bigger than him."

The boys lament on the usual: they're tired, they have homework and tests to study for. They laugh as the others talk. One boy who didn't do well on a test was worried his mother would become "furious" with him.

Thomas said he didn't hear from too many parents. In fact, in many cases, he's the main male figure in these boys' lives.

Throughout the yearlong program, Thomas organizes field trips and special events, including during break times when kids are often the most vulnerable and isolated. A few times a year the boys celebrate "Gentleman's Day" by dressing up in their finest garb and strutting their stuff through the hallways.

He provides tough love, and diligently keeps them on task and doesn't call out every negative behavior. He encourages the boys and gently nudges them to look within themselves to process feelings and pinpoint the source of their emotions. He holds them accountable, and they don't hold it against him.

When he arrives at the school each day, Thomas first walks the halls, past the homeroom of each of his kids to give a small wave and to let them know they can feel safe. He's there.

It might get them a stern look from a teacher, he said, but it's worth it for them to know he's in the building. 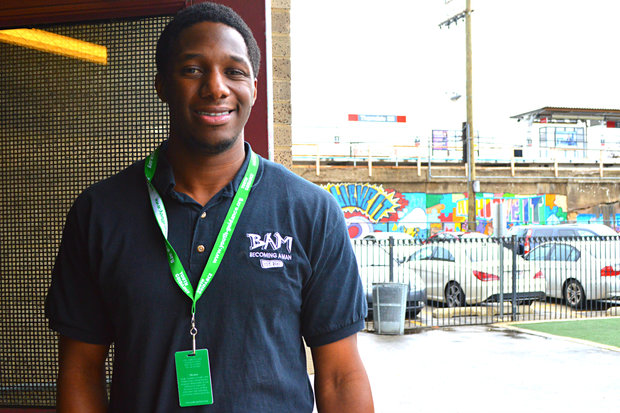 Antonio Thomas, "BAM's" leader in Edgewater, has become a fixture not only for the young men at Swift and Goudy elementary schools, but to students of all genders and ages across the community. [DNAinfo/Linze Rice]

Throughout the community, Thomas said he provides a familiar face for kids around Edgewater — and if he sees a young man wearing a "BAM" T-shirt, he's not afraid to call him out to make sure he's following the group's values.

Monday's group was filled with seventh- and eighth-graders, which could be the age when they become "interested" in gangs, Thomas said.

His boys tell him they feel "invisible" in the neighborhood oftentimes, and struggle to escape a reputation for being "bad boys" at school.

But deep down they're not bad boys, not if Thomas can give them the tools to behave their best and feel a part of the their city, he said.

"The cool thing about middle-school kids is they're all followers," Thomas said. "All it takes is just one kid doing the right thing and they'll all follow."

Thomas said he received tremendous support from Osterman, and calls working the Becoming A Man program his "dream job."

The Milwaukee native said he was "one of the lucky ones" who grew up with two married parents, both supportive and loving.

Starting at age 10, Thomas went to an Iowa camp for African-American boys that addressed issues the kids were going through. Looking back, he said the experience helped prepare him for role now at CPS schools.

At the heart of it all, he said, is just showing a little kindness and compassion.

"My kids, they're termed the 'bad boys,' you know they're not really that bad they're the ones that just needs a little extra attention," Thomas said. "So, if you give it to them, give them some positive attention, now they're starting to learn a little bit.

"... We all can get better at being a man. That's the cool thing, we all have shortcomings, we all fall down. But we can still get up and do better. I wouldn't say I'm a hero or anything. I would just say I try to prevent a lot. I say I just show up every day."