By Linze Rice |&nbspDecember 16, 2015 4:39am | Updated on December 16, 2015 6:11pm
@linzerice
Twitter Facebook Email More
Artist couple Caro D'Offay (l.) and Laura Gilmore (r.) said they wanted to create a piece that not only created a discussion on a dark subject matter, but also showed "the good side" of humanity as well.
View Full Caption
DNAinfo/Linze Rice

The couple, both artists, decided they needed not only a way to process their own feelings on the shooting, but also wanted to find a way to highlight the good in humanity.

So for the past four holiday seasons, the pair have constructed a huge display in front of their Norwood Street two-flat depicting a letter exchange between a fictional boy named "Bobby" and Santa.

The letter, which looks like a sheet of notebook paper, stands 12 feet tall.

The scene comes complete with a 9-foot-long pencil, a huge glass of milk and an enormous plate with cookies.

"So far everyone ... they come, they read it, their eyes glisten and they turn around and say, 'Thank you so much, you have moved me. I feel such a kindness,' " D'Offay said. "That's the theme we keep getting is that people walk away feeling kindness in their heart, and that's what we're trying to do."

The installment is the fourth in a series that began as a way to evoke empathy for others, and to take a moment to slow down and reflect on both the good and bad in the world.

A culmination of national and local tragedies had touched their lives in personal ways, the couple said, and they wanted to find a way to reach out to others.

So far, the couple said they get dozens of people each day who stop by to read the letter and end up sharing a strong emotional moment, even crying at times.

People thank them for the installation, and the couple often talks with those who stop by to discuss the far-reaching effects of violence, and how small acts of kindness can be life-changing.

D'Offay, also a fiction writer, had been researching the way certain hormones affect behavior before starting the tradition. She said she was fascinated by learning how behaviors can lead to various social problems if people, especially men, are not able to express their emotions in a healthy way.

Living in Edgewater since 2010, she said she also felt inspired by the many young children she sees in her neighborhood daily.

"I feel like a problem in society is that we don't give a lot of boys the ability to feel safe to cry, to feel safe to express their emotions — and a lot of them turn out to be bullies because they don't know how to act inwardly," D'Offay said. "I feel like there would be a lot less anger in the world if we taught boys to be more sensitive."

The duo came up with a storyline surrounding the concept of 8-year-old "Bobby" and his friend who sometimes acts out — a "potential shooter" — and "Bobby's" coming to understand the ways compassion and understanding can affect others, while learning to deal with his own problems.

"Remember that how people treat others is how they feel about themselves," Santa wrote. "If someone doesn't feel connected to his soul, how can he be expected to care for others? We can't change people Bobby. But when we live with an open heart, we make room for others to care."

This year, "Bobby" responded first by thanking Santa for a new book, "Captain Compassion," about a man whose superpowers are based in having compassion for others. By reading it, he said he learned that when people seem angry, they are probably really sad.

He also alludes to losing his father, and talks about growth and self-transformation. 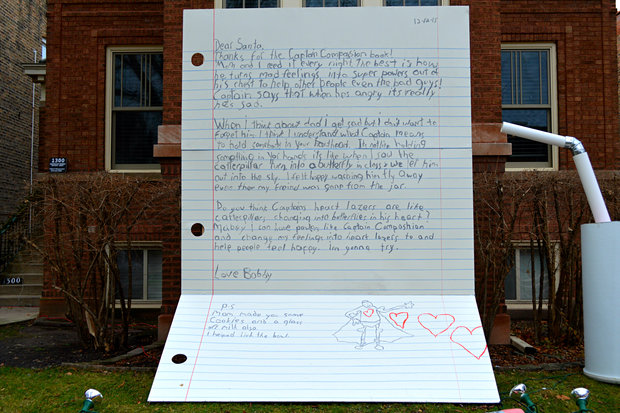 The letter, in full, reads:

Thanks for the Captain Compassion book! Mom and I reed it every night. The best is how he turns mad feelings into super powers out of his chest to help other people even the bad guys! Captain says that when hes angry its really hes sad.

When I think about dad i get sad but i don't want to forget him. I think I understand what Captain means to hold somebody in your heart. Its not like holding something in yor hands its like when I saw a butterfly in class and we let him out into the sky. I felt happy waching him fly away even thow my friend was gone from the jar.

Do you think Captains heart lazers are like catterpillars changing into butterflies in his heart? Mabey i can have powers like Captain Compashion and change my feelings into heart lazers to and help people feel happy. im gonna try.

P.S mom made you some cookies and a glass of milk also. I helped lick the bowl.

From the planning stages to construction and installation, D'Offay and Gilmore said it takes about three weeks for the piece to be complete.

This year was the debut of the cookie plate, which used to be a sign they found in a West Ridge alley.

Each year, the couple try to install the art around Dec. 12, the date of D'Offay's mother's birthday, and it stays up until after Jan. 11, D'Offay's birthday.

She said someday she would like to start working on a children's book series starring "Captain Compassion" as a vessel to talk to young people about the social/emotional world, and how to treat each other with kindness in a world that can sometimes be cruel.

"I looked at Laura and I said, 'I think we really hit it this year, I think people are really going to feel this,'" D'Offay said. "And I could die happy right now. It means so much to me knowing I've spoken so clearly on something that means so much ... we really feel like this is doing something. That it's doing something. And sometimes in life all you want to do is do something good."