RIVER NORTH — A developer has unveiled plans for a new River North condominium tower, one that would rise 24 stories steps from the "L."

Chicago-based JFJ Development made its first pitch to neighbors Monday for the 71-unit tower it wants to build at 300 W. Huron St. If built, the project would replace a longtime parking lot at the northwest corner of Huron and Franklin streets.

In a departure from most recent developments, JFJ's proposal calls for luxury condos instead of apartments as Downtown home prices near prerecession levels. And by proposing two- and three-bedroom units asking between roughly $600 and $700 per square foot — or $1.6 million for the average 2,500-square-foot place — JFJ is targeting affluent buyers. Jon Zitzman, JFJ's founder and president, said the site's zoning didn't allow for the number of apartments to make sense economically.

"We explored apartments and it just didn't work," he said. "And I'm a condo builder."

The developer's portfolio includes a 27-story condo tower at 110 W. Superior St., a 14-story building nearby at 150 W. Superior, and the massive Harper Court office-and-retail complex in Hyde Park. Its designer for the 300 W. Huron project is Hartshorne Plunkard Architecture, which is working on the 22-story apartment tower proposed for the site of the shuttered Ed Debevic's at 640 N. Wells St.

Though it would replace a parking lot, the new building would still include plenty of room for residents' cars. JFJ's plan calls for a tower built on top of a three-story "podium" including retail fronting Orleans Street and 71 parking spaces. Of those 71 spaces, 57 would include a lift for a second car.

Still, Ald. Brendan Reilly (42nd), whose ward includes the site, told guests the plan still fits the bill for a site that lies next to "L" tracks and about two blocks from the Chicago Brown Line station.

"You couldn't find a better definition of a transit-oriented development," said Reilly, who co-hosted Monday's presentation with the River North Residents Association.

Sophie Bidek, a partner at Hartshorne Plunkard, said the condos would range roughly from 2,000 to 5,000 square feet. Aside from the parking, resident amenities would include a "pocket park" off Orleans, track, dog run, outdoor pool and grill area. Plans also call for a two-story store in the parking podium off Orleans, but Bidek said it was still too early to say what kind of retailer would open there. 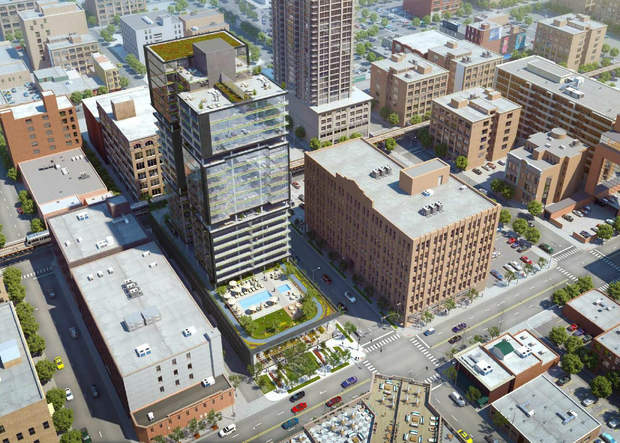 An aerial view of the tower proposed at 300 W. Huron. [Hartshorne Plunkard Architects]

The project was mostly well-received Monday, with a few concerns about its height aired by residents of a low-rise building called Tuxedo Park next door at 700 N. Orleans St. But another next-door neighbor, architect Joe Antunovich of Antunovich Associates, 224 W. Huron, told the crowd Monday the project's design was "terrific" and that he appreciated the developer's plan to put the tower in the middle of the lot, offering more open space.

"You've taken away our sun, but you pulled the building farther east," Antunovich said. "Thank you for these considerations."

The site does not need a zoning change, but the development does require city approval because of its size. Given city approval, Zitzman said he would start construction at the end of next year or early 2017, and building the tower would take about two years.

Veteran Tamale Is Closing After 70 Years On The Southwest Side