Chicago Police Supt. Garry McCarthy Fired By Rahm: 'He Has Become An Issue'

CHICAGO — After more than four sometimes tumultuous years at the helm of the Chicago Police Department, Supt. Garry McCarthy was asked to resign Tuesday by Mayor Rahm Emanuel, who said his top cop had become a distraction amid the furor over the police slaying of a teen.

McCarthy and Emanuel have been under pressure after the release of a dashcam video showing an on-duty police officer shooting Laquan McDonald 16 times in October 2014. The officer in the case was charged with murder.

When asked what his $260,004-a-year superintendent did wrong, Emanuel said, "He has become an issue rather than dealing with the issue, and a distraction."

RELATED: McCarthy's Wife Says Her Husband 'Has One of the Hardest Jobs on the Planet'

"This morning, I formally asked for his resignation," Emanuel told reporters at City Hall. "Now is the time for fresh eyes and new leadership."

McCarthy's top deputy, John Escalante, will serve as acting superintendent while the city searches for a replacement.

Emanuel said he had met with McCarthy over the weekend about how "the public trust has been shaken and eroded."

On Tuesday morning, he asked for McCarthy's resignation, the mayor said.

McCarthy, 56, was appointed in May 2011 as one of the top hires of Emanuel's new administration. McCarthy had previously been chief of police in Newark and held executive positions in the New York Police Department.

McCarthy was a stark contrast to his predecessor, Jody Weis, a former FBI boss who never had the full support of the rank-and-file police officers. McCarthy enjoyed a warm reception in Chicago, for a time. 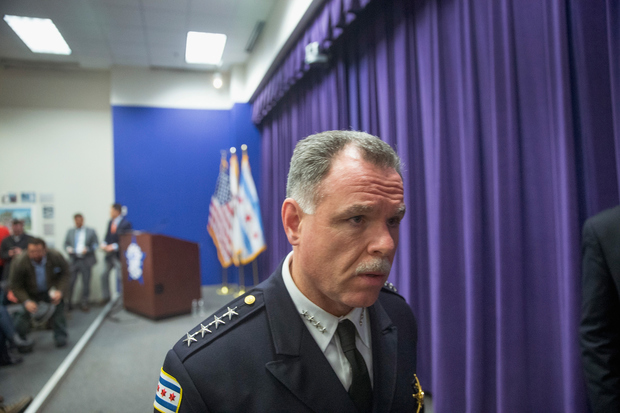 McCarthy had spent Tuesday morning making a number of media appearances, speaking on morning news programs and defending his actions in the shooting case of McDonald, a 17-year-old African-American who was shot by Officer Jason Van Dyke in October 2014. That shooting was captured on a dashboard camera in a police SUV and, under court order, was released to the public last week, setting off days of protest.

McCarthy told CBS Monday that his "hands were tied" in the McDonald case.

“I couldn't fire him. I couldn’t put him in a ‘no pay’ status. I couldn’t discipline him. That’s the law,” he told the station. “It was not the Chicago Police Department investigating this incident.”

During the Tuesday news conference, Emanuel praised McCarthy's "excellent" record and credited him for the lowest overall crime rate on record in Chicago. The mayor added that, in the current situation, "I'm responsible. I don't shirk that responsibility." 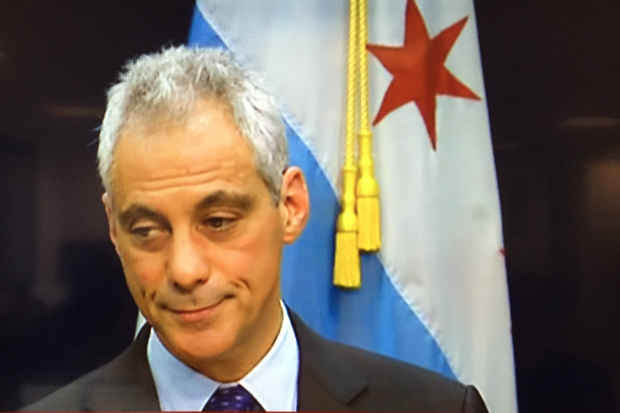 "But Supt. McCarthy knows that a police officer is only as effective as when he has the trust of those he serves," Emanuel added. "After this weekend, after effectively handling both the protests that followed the release of the McDonald video last week and the arrest of Tyshawn's killers, Supt. McCarthy and I began a discussion on Sunday about the undeniable fact that the public trust in the leadership of the department has been shaken and eroded."

Emanuel called McCarthy's record "a strong one, and one that he can be proud of. ... But now is the time for fresh eyes and new leadership to confront the challenges the department, and our community and our city are facing as we go forward.

"This is not the end of the problem, but it is the beginning of the solution to the problem," Emanuel added.

Van Dyke has been charged with murder, a first in the city's history for an officer acting while on duty.

The drumbeat for replacing McCarthy has been growing louder in recent days, with black aldermen calling for his ouster at a City Hall press conference Wednesday followed by other powerful black figures, including Cook County Board President Toni Preckwinkle.

Preckwinkle welcomed Tuesday's announcement. "I have long thought that former Supt. McCarthy’s policing strategies were wrong-headed and did nothing to instill trust and confidence — especially in communities of color," she said in a statement. "The mayor says former Supt. McCarthy’s resignation is not the end but a beginning to rebuilding trust and confidence in the Chicago Police Department. I agree that his resignation is just that — a beginning. I want to see what comes next."

Protesters have also been calling on Emanuel and Cook County State's Attorney Anita Alvarez to resign.

Emanuel had stood by McCarthy, as recently as Monday when the mayor's office released a statement of support.

In a Tuesday editorial, the Sun-Times called for his resignation in a Page 1 editorial saying he had "lost the trust and support of much of Chicago, without which he cannot do his job."

Emanuel said the Police Board would make recommendations on a replacement.

Shortly before the announcement, Ald. Ariel Reboyras (30th), chairman of the Public Safety Committee, expressed doubts on the effect a change in police leadership would have. "Unfortunately, I don't think that's gonna make much of a difference at this point," he said. "I think it goes far beyond that. And there's only so much the superintendent can do."

Members of the City Council's Progressive Reform Caucus cheered the move, however. "The removal of Supt. McCarthy is a first step, but only one step, on the path to correcting the systemic problems which led to the death of Laquan McDonald and the ensuing cover-up," said Ald. Leslie Hairston (5th). "We do not celebrate today, for there is much to be done."

The caucus went on to call for aldermanic representation on the mayor's newly proposed Task Force on Police Accountability.

The Chicago Teachers Union cheered McCarthy's departure as well, issuing a statement lauding Emanuel for his "moral courage," but suggesting an elected Police Board to go with an elected Board of Education.

Sneed has mentioned these possible candidates:

What Happened to the Burger King Surveillance Video of Laquan Shooting?