Upgrade Your Thanksgiving With Unique Recipes from Top Chicago Chefs

CHICAGO — Jimmy Bannos' turkey is better than your turkey.

"I confit it in 12 pounds of Plugra butter, so there's no way the breast could ever be dry," said Heaven on Seven's chef and owner, who will host Thanksgiving, as usual, in his Park Ridge home for nearly three dozen relatives and friends.

Bannos' bird is the hotly anticipated centerpiece of his holiday meal — but it's not even his signature dish.

We asked Bannos and other top Chicago chefs to tell us about the one non-negotiable item they make every year to keep hangry family members in their seats at the table.

And because the next 36 to 48 hours are about food and nothing else, we also wanted to know their favorite way of eating Thanksgiving leftovers. Here's what they said. 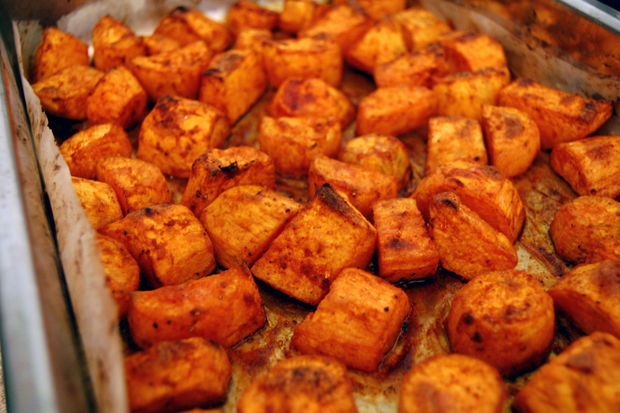 The dish: Bannos' candied sweet potatoes are his wife's grandmother's recipe. He roasts the peeled and cut potato chunks first to give them a little color, then tosses them with brown sugar, molasses, corn syrup, cinnamon and — shocker — "a lot of butter" and continues roasting for 45 minutes to 1 hour.

"I do them the day before so they soak up all the juice, and reheat it the next day," Bannos said.

The leftover: Turkey on white bread. "Mayo on both sides of the bread, turkey, salt and crushed black pepper. Smash it and that's it. That's like at 10:30 at night, when everybody is gone. Then I'll do one for breakfast the next day before I go to work," he said. 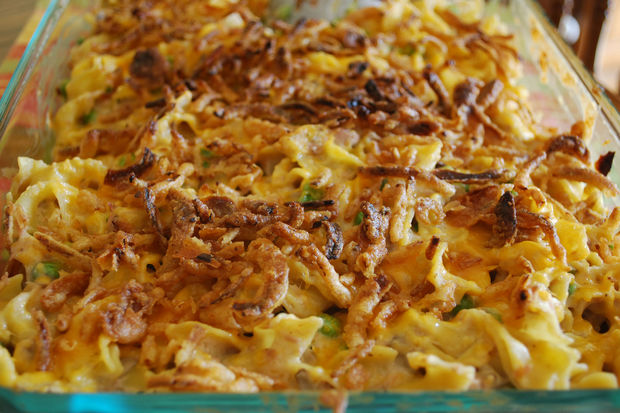 Why not put fried onions in your sweet potato casserole? Stephanie Izard does. [flickr/MisforMysterious]

The dish: Izard's sweet potato gratin (recipe below) makes use of extra fried onions that aren't scattered over the obligatory green bean casserole. The potatoes bake in a cheesy, creamy sauce spiked with chili flakes.

The leftover: "I like to take tempura batter and fry leftover mashed potatoes to serve at brunch the next day," Izard said.

In a sauce pot with a heavy bottom, bring the cream to almost a simmer. Slowly add the blue cheese while whisking until just incorporated. Whisk in the chili flakes, brown sugar and salt. Remove from heat and reserve.

To assemble: Toss the potato slices with a pinch of salt. Lay 1/3 of the potato slices down in the bottom of a casserole dish and top with 1/3 of the cheese sauce. Sprinkle with 1/4 of the onions. Repeat to form 3 layers. Bake in preheated oven at 300 degrees for about 45 minutes covered and an additional 15 minutes uncovered. Cook until the cream has reduced and thickened and gratin is set. Remove from oven and finish with the remaining crispy fried onions. 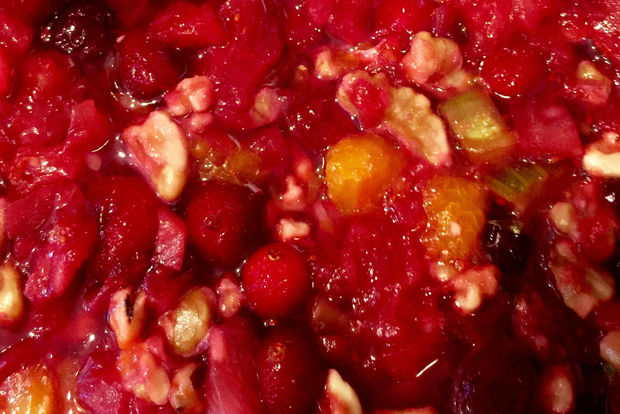 The dish: As a kid, Elliot was put in charge of stirring the cranberry sauce "for what seemed like hours and hours," he said. Now, he's taken on his wife Allie's late grandma's cranberry sauce (recipe below). Grandma Kunes' sauce is the chunky kind with diced celery, walnuts and citrus fruit.

The leftover: A turkey sandwich with cranberry mayo (made by mixing mayonnaise with some of that homemade cranberry sauce). "There's nothing worse in a sandwich than not having that creamy texture," Elliot said.

Cook cranberries in sugar and water for 10 minutes. Add all other ingredients. Chill at least 1 hour. 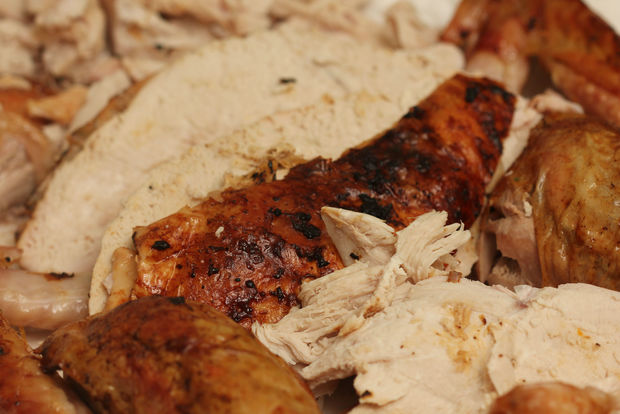 Iliana Regan's swears by her applewood-smoked turkey. [flickr/Nicole Peters]
The dish: Regan's smoked turkey is the star. She brines it first with herbs, garlic and peppercorns, then smokes it at 185 degrees over applewood chips until the meat hits 155 degrees.

The leftover: Her mom's stuffing. "She adds lots of sage and mushrooms," Regan said. 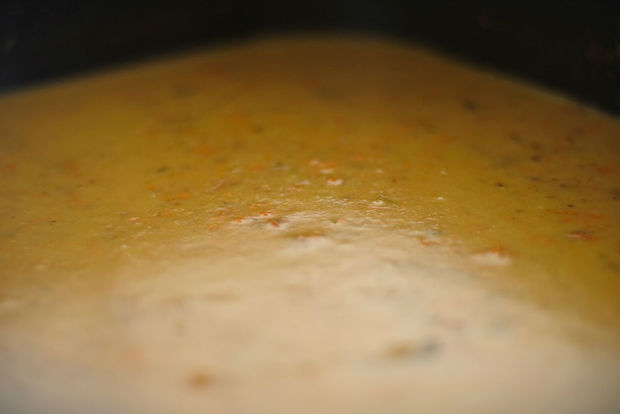 This is traditional gravy. This is not Bill Kim's gravy. [flickr/Andy Ciordia]

The dish: Everyone looks to Kim for gravy (recipe below). His is not at all typical, infused with lemongrass and garlic and thickened with coconut milk.

The leftover: A turkey leg. But not just a turkey leg. Kim puts the leg in a pot with some chicken broth, hominy, tomatillo and cilantro and simmers it for about an hour. Served with tortilla chips, avocado, radish, lime and more cilantro, it's now turkey leg posole.

Sweat onion, garlic, lemongrass, thyme and sage. Add pork sausage and break up, saute until thoroughly cooked. Add flour to soak up fat from sausage. Whisk in coconut milk and chicken broth. Simmer 20 minutes on low heat  and season to taste. Optional seasoning: fish sauce, which is like my salt, black pepper and chili flakes if you want it a little spicy, and of course, it is all by taste. 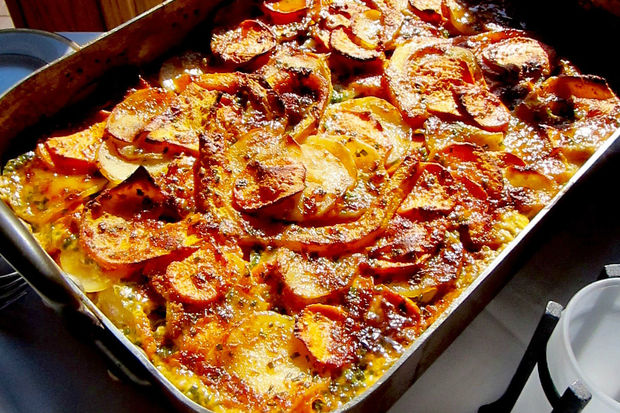 The dish: Sherman's rich root vegetable gratin (recipe below) features potatoes, sweet potatoes AND kabocha squash. The latter is crucial because of its "sweet, earthy and creamy" flavor, he said. The vegetables get cozy in heavy cream, maple syrup and lots of grated cheese.

Mix in cheese. Evenly place squash-potato mix in gratin dish, assuring pieces lay flat. Pour excess liquid over top and press down to compress and coat. Place in oven for 30 minutes. Rotate and cook another 30 minutes, or until lightly browned and skewer inserted offers no resistance. Cool 15 to 30 minutes before serving. 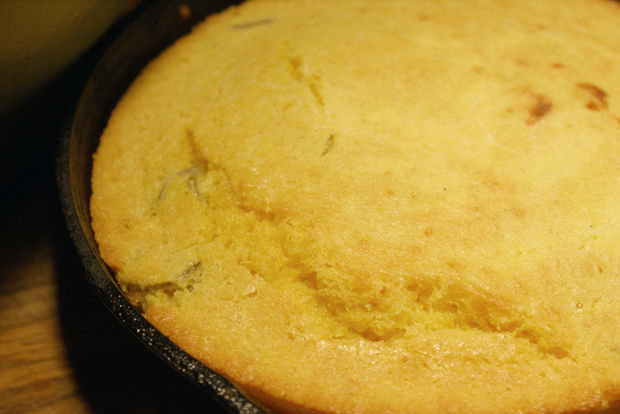 The dish: Grueneberg makes cornbread dressing just as her grandma did, using from-scratch cornbread and a rich poultry stock made with the turkey neck and giblets plus a whole chicken. The pulled chicken meat and giblets go back into the dressing.
The leftover: A turkey and ham sandwich on steroids. Grueneberg layers in a little of each side dish: the cornbread dressing, mashed potatoes, broccoli rice casserole, hash brown casserole and cranberry sauce.