"You are free to go," Judge Peggy Chiampas said Wednesday before the packed courthouse had to be quieted by the sheriff's deputy.

Asked how he was treated by police, London said, "Well, it was jail."

London, 22, was arrested shortly after 7:30 p.m. Tuesday, when police said he hit an officer during protests over the killing of Laquan McDonald in the 100 block of East Balbo Avenue near Grant Park, according to a Chicago Police Department news release.

A collective of black Chicago aldermen, joined by local protesters, activists and thousands of people on social media, spoke out against London's arrest and detention early Wednesday.

Upon his exit from the courthouse, London was swarmed by media and supporters.

"I'm glad to be amongst my people," he told reporters.

The group then began a march to  41st and Pulsaski, where Laquan McDonald was fatally shot.

According to a police report, London punched the officer in the eye, causing the officer's eye to bruise and turn purple and blue. When police tried to arrest London, he pulled away and resisted, the report said.

He was charged with one felony count of aggravated battery of a police officer. The officer was treated for non-life-threatening injuries and released, the police department said. London was one of five protesters arrested Tuesday night.

London, of the 4900 block of West Huron Street, is a member of the Black Youth Project, an activist group that has been vocal in the aftermath of the Laquan McDonald shooting.

As a leader of the group, London was one of the activists who refused Mayor Rahm Emanuel's request for a meeting ahead of the release of video footage showing McDonald's shooting death at the hands of a police officer.

Protesters gathered outside of the Cook County Criminal Courthouse early Wednesday to advocate for London's release.

Jesse McAdoo, a protester who participated in Tuesday's demonstration and set up outside the courthouse Wednesday morning, said the poet and three other protesters arrested yesterday — May Oage, Johnae Strong and Troy Alim — are all activists who were invited to speak recently at a United Nations forum in Geneva, where they addressed police brutality in America.

"They did it because he's a leader," McAdoo said of London's arrest. "Everybody who got arrested is an activist."

McAdoo said he was there when London was taken into custody. He said that the situation was getting heated with police when the group was barred from entering Grant Park. When a smoke bomb went off, police began pointing at London, he said. 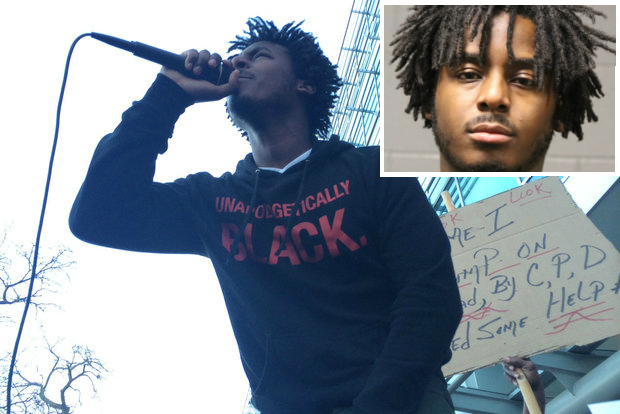 Prosecutors said the altercation between London and police was caught on video.

At an earlier press conference at City Hall Wednesday morning, Ald. Roderick Sawyer (6th) also singled out London by name, and said he wanted to "applaud the youth in our community for last night's actions, particularly ... Malcolm London, who has been held in jail unjustly."

"He needs to be released today, so that he can continue this activism," Sawyer said, alleging that London was "arrested on some trumped-up charges."

Sawyer said his daughter, who "is very close friends with" London, described his arrest to the alderman as "a kidnapping" after "an unidentified white male threw a smoke bomb."

"As soon as it was thrown, they pointed at Malcolm London," Sawyer said. "They ambushed him."

Sawyer described Tuesday night's demonstrations as "a peaceful protest" of "people exercising their right to protest."

McAdoo was part of a group of eight protesters gathered outside the Cook County courthouse around 11:30 a.m. Wednesday to show support for London and advocate for his release.

One activist, Rousemary Vega, said the charges against London were "bogus" and characterized him as "a man just trying to exercise his free speech."

"If there wasn't an uproar after the video [of the Laquan McDonald shooting] was released, there will be over Malcolm's arrest," Vega continued. She called London's arrest "a retaliation tactic."

London's supporters also took to Twitter to advocate for him. Chicago rapper Vic Mensa alleged that he was with London at the time of his arrest, and Tweeted an account that mirrors Sawyer's version of events.

YO. Chicago Police framed @MalcolmLondon & wrongfully imprisoned him. He was peacefully organizing.

We were on Randolph and State talking amongst ourselves and they came and threw a smoke bomb into the crowd & grabbed him.

London is a notable activist and slam poet in Chicago and nationally and sits on the Young Adult Council of the Steppenwolf Theater, according to his website. In 2011 he won the city's Louder than a Bomb poetry slam competition. His TED Talk about "life on the front lines of high school" has almost 1 million views.

After learning of London's arrest, protesters marched to Chicago Police Department's Central District headquarters Tuesday night to demand his release as well as the release of other arrested protesters.

Protesters then took to Twitter to say that London was unfairly targeted and provoked by officers looking to arrest him. #FreeMalcolmLondon was trending nationally Wednesday morning.

I know @MalcolmLondon, my daughter with him in the protest. I don't believe that the reports that led to his felony charge. He is a hero

London's supporters also include musician Chance the Rapper, who was just named "Chicagoan of the Year" by Chicago Magazine.

My brother @MalcolmLondon has been doing man's work at home and all around the world. Watch what we do next.

London has been a fixture at many local protests addressing conflict between civilians and police.

Other activists are raising money to help London and other arrested activists post bond if the charges were upheld.

Wednesday morning, #FreeMalcolmLondon was the number one Twitter trending topic in the city.