'It Did Not Have To Be This Way': Protests, Memorial for Laquan McDonald

ARCHER HEIGHTS — A day after the disturbing video of 17-year-old Laquan McDonald's death was released and Officer Jason Van Dyke was charged with first-degree murder, community leaders held a memorial near the site of his shooting while protesters with a host of activist groups said their fight was far from over.

Groups of people gathered throughout the city, including at a memorial for McDonald in Archer Heights, where he was shot 16 times by Van Dyke and died in October 2014. More than 200 showed up to a protest Downtown that started in the Loop and marched up the Magnificent Mile, disrupting traffic during rush hour before the long weekend. Another protest started later Wednesday night near Chicago Police headquarters at 35th and MIchigan.

A total of four people were charged with crimes related to the protests, police said.

At least two more protesters taken into custody after a scuffle with police. @WGNNews #LaquanMcDonald pic.twitter.com/8y5uPbq1b3

More than two dozen community activists and residents gathered Wednesday afternoon outside a memorial for Laquan McDonald near 41st and Pulaski, a short drive from where the 17-year-old was shot.

"We are standing in solidarity for the young black activists that have taken the lead on this issue," said Katya Nuques, director of Enlace Chicago, a community outreach group, at the memorial in Archer Heights.

Head of #IMAN calls the community to rally forward after the horrific shooting death of #LaquanMcDonald pic.twitter.com/XIYJGD5zr6

“That was a terrible video I saw,” said Anita Caballero, president of the Brighton Park Neighborhood Council, at the southwest side memorial. "It did not have to be that way.”

A call for peace also echoed between speakers.

“We must stand united,” said Rami Nashashibi, executive administrator of Inner-City Muslim Action Network. “We must stand together, and we must stand with one voice that says we will live and we will fight for peace so we can live in unity with one another.”

The Downtown protest was mostly peaceful, though the march through the Loop did disturb traffic during rush hour and protesters reportedly removed strings of lights from the Christmas tree in Millennium Park later Wednesday night (warning: video contains swearing).

Among their demands (though not all protesters signed onto a specific list, as they came from various groups) were an end to police violence, for Police Supt. Garry McCarthy and Mayor Rahm Emanuel to be removed from their posts and for other police leaders to resign.

Protesters gathered first at State and Jackson about 4 p.m., calling for accountability and justice for victims of police violence, in addition to investment in communities of color. They moved toward Randolph and Michigan, where a large number of police on bicycles blocked their way and rush hour traffic on Michigan Avenue piled up.

There are a LOT of police blocking Randolph at Michigan. #LaquanMcDonald pic.twitter.com/yTZB5wSU3z

The marchers blew whistles and cars honked their horns, making for a noisy scene, though the crowd of protesters was smaller than the day before, topping out at more than 200. "No justice, no peace, no racist police," they chanted.

They marched up the Magnificent Mile shopping district and took over a bridge before stopping in front of Trump Tower. Protesters said they hoped the march would cost the GOP frontrunner some customers and money. Then they headed to the offices of ABC7, across from the Chicago Theater.

Two people were detained by police around 8 p.m. near Congress Parkway and Financial Place, including one man who activists said was Will Calloway, the activist that alerted journalist Brandon Smith about the McDonald video and persuaded him to sue for its release. (Video of clash here — warning, there is swearing.) Calloway, though, was not among the protesters charged with crimes, police said.

One other person also detained, activists say. "Free Will Calloway!" they chant. pic.twitter.com/QqM3VI04YW

Police have detained someone after a tussle. Activists said it was Will Callaway(sp?). pic.twitter.com/e5dmHxuOZP

After the alleged arrests, the group, which had begun to thin, headed to the 1st District police office to call for the release of their fellow protesters. At that point, the crowd started to disperse and some said they would join one of two other protests.

The second protest began near Chicago Police headquarters at 35th and Michigan around 7 p.m. Wednesday night. Some protest leaders pledged to meet at 9 p.m. at Harrison and State as well.

At CPD hdqrts. Demonstrators say there's been too many protests and not enough boycotts. #LaquanMcDonald pic.twitter.com/XDzUAXHFD3

Marchers regrouped and headed toward Michigan Avenue again, this time pushing through barriers and into Millennium Park. Multiple news outlets reported that some people pulled strings of lights off the Christmas tree at Millennium Park, which then resulted in two other people being detained.

They damaged the tree and someone is being arrested pic.twitter.com/GMoM6Ckn7B

The march continued north on Michigan Avenue, though with a smaller group than the rush-hour protest, into River North and close to the off-ramp for I-90/94. The protest moved west toward Gold Coast but people were stopped at State and Division by police. Activists promised continued demonstrations through the holiday weekend.

"We are poised to march as long as needed," said Charlene Carruthers with the Black Youth Project, one of the groups that participated in the protest. "This did not start last night and it didn't end last night. We are marching in protest of constant, structural racism by the Chicago Police Department."

Activists say there is a "slow genocide" of black Americans. #LaquanMcDonald pic.twitter.com/nnMAk6mWzb

"While I understand there may be questions or frustration about the length of time of the investigation, I want to assure citizens that my office took the necessary time that was required to [build] the strongest case possible so that justice can be served for Laquan and his family.

"As our city digests the facts and circumstances of Laquan McDonald’s senseless murder, I continue to support the rights of our citizens to protest and to express their feelings, but it must be done without violence or criminal actions."

Earlier Wednesday, protesters gathered outside of the Cook County Criminal Courthouse urging the release of poet and civil rights activist Malcolm London. London was accused of aggravated battery to a police officer during protests Tuesday night Downtown, but all charges against him were dropped Wednesday and he was released to supporters.

Demonstrators first took to the streets Downtown Tuesday night. Though the protests were mostly peaceful, demonstrators did clash with police near Grant Park and again near the police department's District 1 building. Five people, including London, were arrested, but most were released hours later.

During a news conference before releasing the video, Mayor Rahm Emanuel and Supt. Garry McCarthy said they were prepared for protests, but discouraged "criminal acts."

Protesters, however, said they are demanding the city and police department make changes — not just to accommodate their protests.

"We are calling for an investment in black futures," Carruthers said. "We live in a city where our schools are closed, where we see black bodies thrown to the ground."

The pastor of St. Rita's Parish speaks about #LaquanMcDonald in Spanish at memorial: pic.twitter.com/uNSjByMGo3

Seven men lead a prayer for #LaquanMcDonald near memorial at 41st and Pulaski: pic.twitter.com/lRgpETwdgE

Putting candles at the foot of a #LaquanMcDonald memorial near where there 17-year-old died in a police shooting: pic.twitter.com/1jHB0rzrcK

More than a dozen people outside the #LaquanMcDonald memorial at 41st and Pulaski: pic.twitter.com/ScmLVpvju0 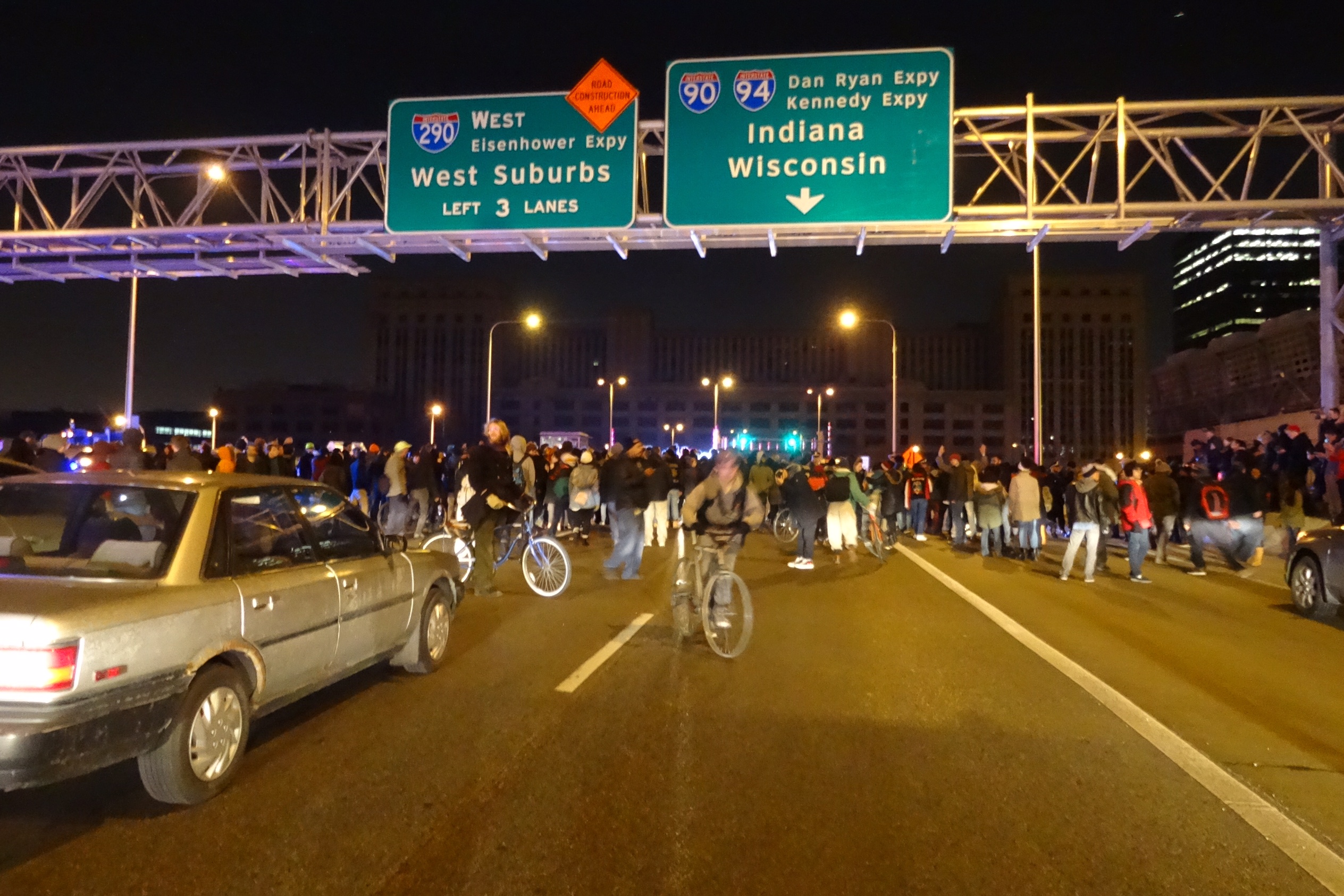 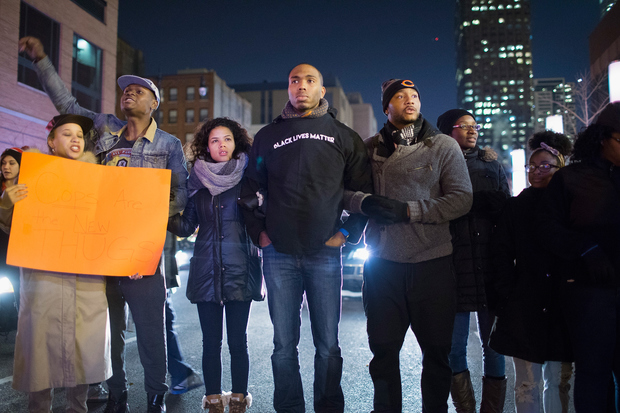 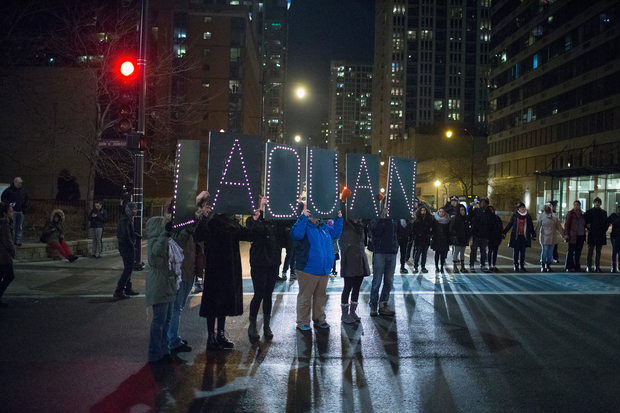 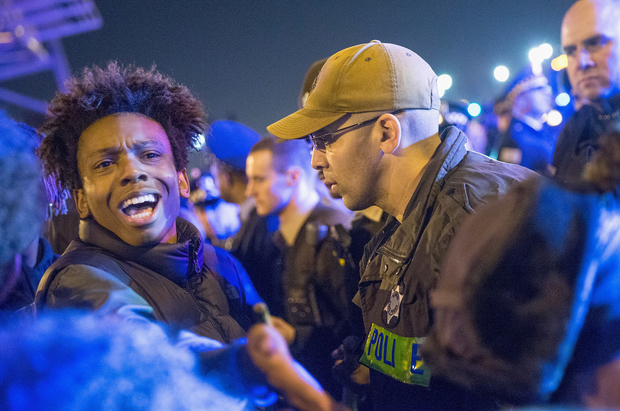 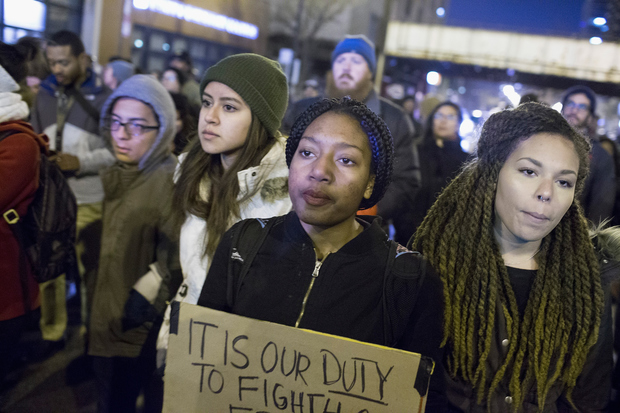 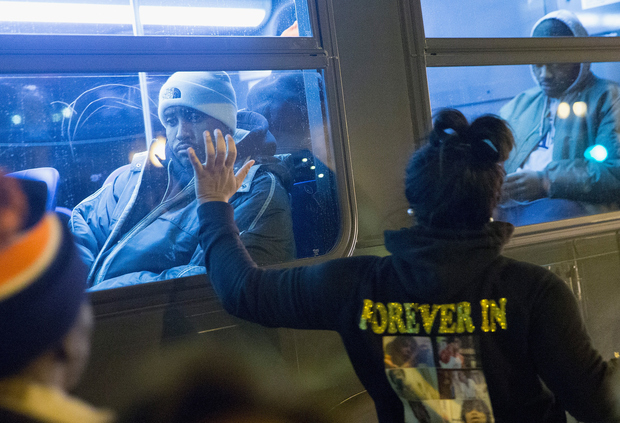 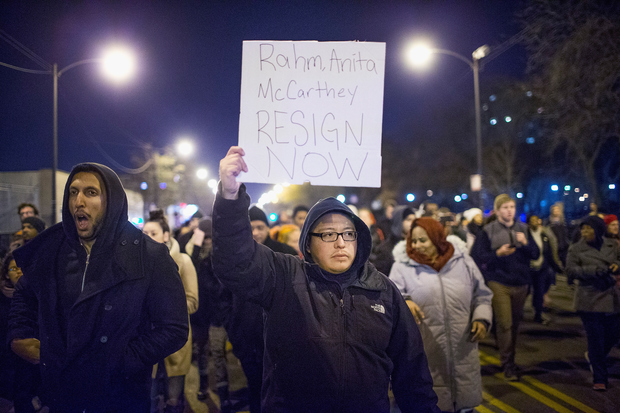 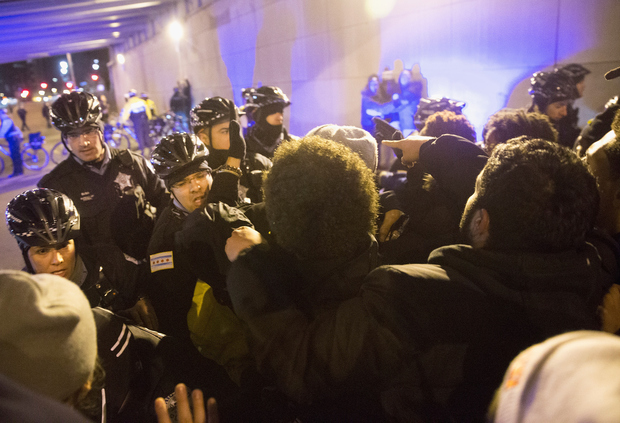 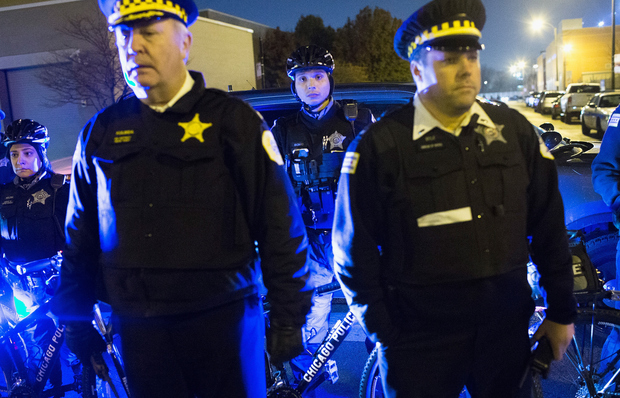