Police, Protesters Take to the Streets After Laquan Video Released

CHICAGO — Protesters marched through streets in Downtown Chicago Tuesday after the release of a video showing one police officer fatally shooting a black 17-year-old.

There were few arrests but some heated moments as protesters screamed at officers. Hundreds of protesters marched on Roosevelt Road, as well as Michigan Avenue and State Street.

Chicago Police Supt. Garry McCarthy said Tuesday that people have a right to protest in the aftermath of the release of a video showing the police shooting Laquan McDonald but "we will be intolerant of criminal behavior."

A total of five people were arrested, police said, including noted activist Malcolm Johnson, who was charged with aggravated battery of a police officer. More protests are expected Wednesday.

At a news conference Tuesday at the release of the video, McCarthy said: "People have a right to be angry but they do not have right to commit criminal acts."

A couple hours after the release, some protesters challenged police near Congress and Michigan Avenue. The protesters attempted to enter Grant Park but police used bicycles as a barracade. Some protestors grabbed at the bikes while shouting "Don't shoot."

Later, they marched to State and Congress then south to the department's Central district station at 17th and State, where three protesters were allegedly detained.

Police could not confirm late Tuesday that they had made arrests earlier during the protests.

"We’re one of the world leaders in mass demonstrations, we’re prepared to facilitate peoples' First Amendment right to free speech," McCarthy said at the news conference, which was also attended by a number of black clergymen and aldermen. But police would not allow people to break laws, he added. 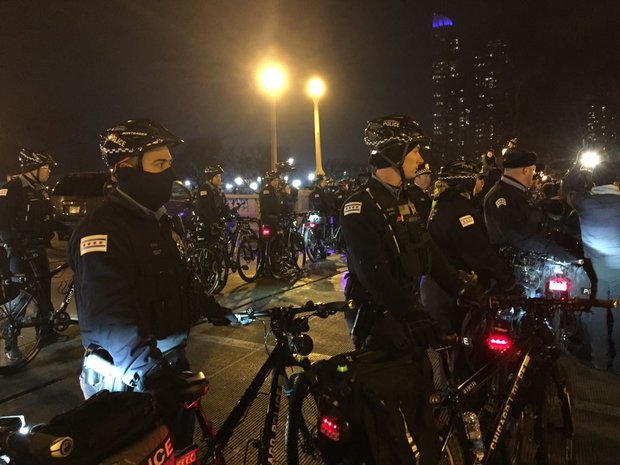 Mayor Rahm Emanuel added: "Will we use this episode and this moment to build bridges that bring us together as a city or will we allow it as a way that becomes barriers that tear us apart as a city?"

The family of the victim, Laquan McDonald, urged Chicagoans to remain peaceful.

Attorneys for McDonald's family released this statement Tuesday, ahead of the video release:

We deeply appreciate the outpouring of love and support for Laquan. This is a difficult time for us. As we have said in the past, while we would prefer that the video not be released we understand that a court has ordered otherwise.

We ask for calm in Chicago. No one understands the anger more than us but if you choose to speak out, we urge you to be peaceful. Don’t resort to violence in Laquan’s name. Let his legacy be better than that.

This is the scene of protesters in #Chicago just moments ago. Latest right now on @CNN https://t.co/YZ32bCBsdM pic.twitter.com/oNo1QWl2tc

McCarthy said that the police department has been turning down vacation requests and placing more detectives on street patrol in preparation for the potentially incendiary video. McCarthy also said the boosted patrols are in response to the recent terrorist attacks in France.

"We've had everybody in uniform for quite some time," McCarthy said following a police graduation ceremony Tuesday morning,

Later, Police News Affair Officer Bari Lemmon said that "with regard to a possible protest, as you’ve seen over the past few years, the Chicago Police Department works tirelessly to protect First Amendment rights."

The remarks offered a glimpse into the city's moves as officials prepared to release the video, which shows a white police officer fatally shooting McDonald in Archer Heights 16 times last year. The police officer, Jason Van Dyke, was charged with murder Tuesday — a rarity in the history of the police department.

A Cook County judge had ruled last week that the video be released after attempts by the police department to block its distribution.

Emanuel, bracing for video backlash, called a meeting with pastors and other black leaders Monday, urging any subsequent protests be "peaceful." Afterward, he called Van Dyke's actions "wrong" and "hideous," though admitting he had not seen the video.

Activist Veronica Morris, an organizer with Woodlawn-based Black Youth Project, doubted Emanuel's sincerity. The mayor's office invited her group to meet with Emanuel but it declined, saying the mayor declined to help their group amid the 34-day Dyett High School hunger strikes or previous calls to discipline Servin and Van Dyke.

"Having him invite us was an obvious signal that he’s scared. He knows that he’s royally f---ed up and he’s gotta find a way to save his own ass," said Morris, 23, of South Shore. "If the city did the right thing and let this thing come up when it happened, he wouldn’t have been re-elected."

Another prominent activist, the Rev. Michael Pfleger of St. Sabina Church, told his parish Sunday to protest on North Michigan Avenue and disrupt holiday shopping Friday, the busiest retail day of the year.

Meanwhile, aldermen throughout the city conferred with police on protest strategies.

"We are confident at this point [police] are fully prepared for anything that might happen," said Ald. Brian Hopkins (2nd), whose ward includes a stretch of North Michigan Avenue.

Hopkins said the city's Near North police district is "very accustomed" to dealing with large crowds — and protests — on Michigan Avenue, and is planning more police and unspecified "contingency plans." Hopkins said some Michigan Avenue stores are also hiring additional security, though some of that may be due to frenzy over the traditional Black Friday shopping specials.

Activist Morris said protests rather than riots are coming. Many people are agitated by what she described as officials' politically convenient but belated efforts to address not only McDonald's death but also the shooting by police of 22-year-old Rekia Boyd. Police Det. Dante Servin, who was acquitted of crimes related to the fatal shooting of Boyd in 2012, is now being eyed for termination more than two months after the city's independent police board recommended it.

Emanuel "has time and time again allowed officers to kill people, and continue to keep them on payroll" she said, adding that now the mayor "is absolutely using the death of this black boy for himself."

They took three of our people and we are not leaving until we get them back. #LaquanMcDonald #16at17 #stopthecops pic.twitter.com/OQpREUNOsZ

Protesters wear masks, and chant into megaphones: Who's side are you on? pic.twitter.com/QfkT68Q6Ky

@DNAinfoCHI Cops have formed a barricade at Balbo. Protesters tried to break through, grabbing wheels and police pic.twitter.com/A2JwCFfJQ8