CHICAGO — The much-anticipated police dashboard cam video of a Chicago Police officer shooting and killing a 17-year-old was released Tuesday evening, offering a graphic and chilling view of what prosecutors say was first-degree murder.

The video of the slaying of Laquan McDonald was held by Chicago police for more than a year and finally released Tuesday after a judge ordered it. The release of the video touched off protests outside Chicago's Loop, which remained mostly peaceful.

A somber Mayor Rahm Emanuel and Police Supt. Garry McCarthy, in the moments before the video release, urged people to remain peaceful.

The video shows Officer Jason Van Dyke, 37, getting out of his squad and shooting McDonald multiple times. Authorities said he hit him 16 times, emptying his cartridge into the teen, including many shots while McDonald was on the ground.

Police union officials initially said McDonald lunged at them with a knife. The video shows McDonald holding a knife and spinning while walking down the middle of the street. It's unclear when the first shot hits him — before or after the spin.

Van Dyke turned himself in Tuesday morning, and a judge ordered him held without bond until at least Monday. He's expected to be held in protective custody.

The nearly 7-minute video begins as the squad car patrols the streets. The squad's flashing lights begin at around the 5-minute mark and at around 5:18 McDonald can be seen walking in the center of Pulaski Road.

Police approach and he can be seen being shot at around the 5:36 mark. A few seconds later, an officer can be seen kicking something away from McDonald's body. Puffs of smoke can be seen coming from the body around 5:43.

Court documents say Van Dyke was reloading his weapon — which he emptied into McDonald — when his partner asked him to hold his fire. 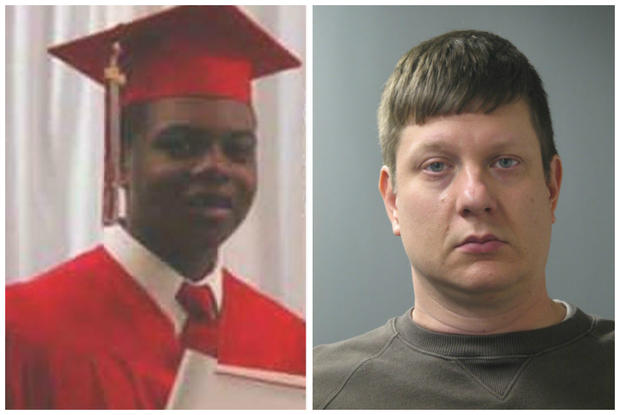 At a press conference at police headquarters at 3510 S. Michigan Ave., ahead of the video distribution to the media, Supt. McCarthy said, "In this case, we have a tragic ending to unfortunately a tragic life of a young man who was betrayed on a number of different levels."

McDonald, according to the Sun-Times, had a tragic life that included sexual abuse in foster homes and being removed from his family's home by the state at least twice.

As for Officer Van Dyke, who was charged with murder earlier Tuesday, "He's going to have to account for his actions."

Mayor Emanuel told reporters, "We hold our police officers to a high standard, and obviously in this case, Jason Van Dyke violated the standards of professionalism of becoming a police officer, but also basic moral standards that bind our community together."

"Anybody who is there to uphold the law cannot act like they are above the law," Emanuel said, adding Van Dyke "does not represent" typical police department behavior.

McDonald was shot and killed Oct. 20, 2014, at 41st and Pulaski in the Archer Heights neighborhood by Van Dyke. The city has already paid a $5 million settlement to the family for the shooting.

The city resisted releasing the video but last week a judge ruled that it had until Nov. 25 to release it. Attorneys for the McDonald family have called the video "graphic," "violent" and the shooting "unnecessary."

Dan Herbert, Van Dyke's lawyer, has said his client's actions "were not only lawful but also within department policy and within his training." His union has also said it "is standing by" Van Dyke.

McDonald was holding a knife at the time of the shooting and the drug PCP was found in his bloodstream, officials have said.

According to prosecutors, McDonald was stealing radios from trucks near 41st and Pulaski shortly before 10 p.m. on Oct. 20, 2014. When responding officers requested backup with a Taser, Van Dyke and his partner responded, Assistant State's Attorney William Delaney said during the bond hearing Tuesday. Neither Van Dyke nor his partner indicated they had a Taser.

Van Dyke was on the scene for less than 30 seconds before he stepped out of his marked SUV and started shooting at Laquan at 9:57 p.m., Delaney said. At the time, the teen was about 10 feet away.

Van Dyke took a step toward McDonald and continued to shoot, emptying his gun, prosecutors said. When Van Dyke paused to reload, his partner told him to stop shooting as the partner went to check on Laquan and kick away the teen's knife, Delaney said.

The partner could hear McDonald struggling to breathe, according to prosecutors. Though McDonald had a pulse on the scene, he was dead by the time he reached a nearby hospital.

There were at least eight other police officers on the scene, Delaney said, but none of them fired at Laquan because they didn't think there was a reason to do so.

Authorities said McDonald was carrying a knife with a 3-inch folding blade. At one point, he slashed the tire of a police car, but witnesses said McDonald never lunged at officers and appeared to be trying to get away from police when Van Dyke shot him, Delaney said. 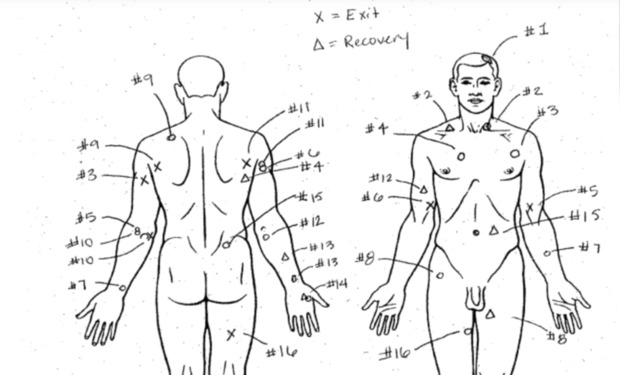 It's the first time, to Alvarez's knowledge, a Chicago police officer has been charged with murder for an on-duty shooting.

The state's attorney has taken heat for waiting more than a year to charge Van Dyke. Alvarez said she's been planning to file charges "for weeks" but moved forward earlier than planned after a Cook County judge ordered the city to release footage of the fatal shooting by Wednesday.

Following a brief bond hearing, Cook County Judge Donald Panarese Jr. on Tuesday ordered Van Dyke held without bail until Monday — when Panarese will re-visit the matter after he's had a chance to review the infamous dash-cam footage.

"I'm sorry," Panarese told Van Dyke, who stood before him in faded jeans and a pea-green sweatshirt. "I'm going to have to hold you no bail until Monday."

In the dashboard-board camera video, one can see puffs of smoke that were later identified as clouds of debris caused by fired bullet, Delaney said.

The Cook County Medical Examiner's Office determined that two of McDonald's 16 gunshot wounds were inflicted while the teen was standing. A third shot can definitely be linked to a time when McDonald was on the ground, Delaney said. McDonald was shot in his scalp, neck, left chest, right chest, left elbow, left forearm, right upper arm, right hand, right upper leg, left upper back and right lower back.

On Tuesday, McDonald's family, in a statement, said, "We ask for calm in Chicago."

"No one understands the anger more than us but if you choose to speak out, we urge you to be peaceful. Don't resort to violence in LaQuan's name. Let his legacy be better than that," the statement read.

The family's attorneys said the family did not want to see it released: "What mother would want to see the execution of her son over and over?" attorney Jeffrey Neslund said. But journalists, activists and the American Civil Liberties Union of Illinois pressed the courts to make the video public.

"We’re one of the world leaders in mass demonstrations, we’re prepared to facilitate peoples' First Amendment right to free speech, but we’ll be intolerant to criminal behavior," he said.

"Anyone that sees this video will also make their own judgments of Jason Van Dyke and of his actions. The incident, his actions in the video will be debated and discussed in the days ahead. It's appropriate, but we as a city of Chicago all of us also have to make an important judgment about ourselves and our city as we go forward," the mayor said.

"In my view, this episode can be a moment of understanding and learning. The question before all of us: Will we use this episode and this moment to build bridges that bring us together as a city or will we allow it as a way that becomes barriers that tear us apart as a city?"