What Will Happen to the 606 When it Snows?

WICKER PARK — Snow is likely coming to Chicago this weekend, and the Park District says it will be clearing any accumulation from The 606's Bloomingdale Trail — as long as there's not too much.

The Park District will be removing snow and clearing the 2.7-mile-long elevated path for biking, running and walking, spokeswoman Michele Lemons said Thursday. The Chicago Park District is responsible for keeping the trail and ground-level parks plowed and cleaned.

Winter sports (such as snowshoeing and cross-country skiing) will only be allowed as part of official park programming.

The Park District asks that Chicagoans take caution for slippery conditions. Since the trail is elevated, much like bridges, it is more likely than the ground to get icy.

Anywhere between 2 and 6 inches of snow are predicted to fall this weekend, beginning late Friday.

Meanwhile, the once densely-populated trail has gotten a bit more empty as the weather worsens.

In recent weeks, several "wayfinding" blade signs were added to the trail.  Currently blank, the signs will eventually indicate proximity to the next exit or amenity.

"The amenities that will be included on the signs are features along the trail like the Damen Arts Plaza, Humboldt Overlook and Observatory. The signs will also indicate the distance to the next [ground] level park," Lemons said.

Stay abreast of what's happening by "liking" The 606's Facebook page, following The 606 on Twitter and signing up for weekly alerts at the606.org. Also, the Friends of Bloomingdale Trail has an active online Facebook community with over 3,971 members. You can call 312-742-4622 for more information. 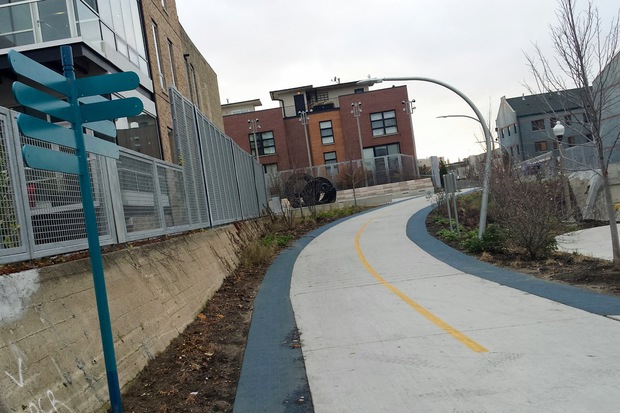