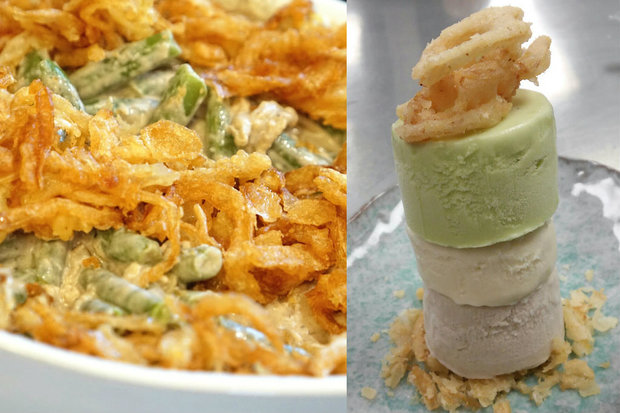 GOLD COAST — Replicating the flavors of the Thanksgiving meal beyond the meal itself might strike some as funny, pointless, doomed to failure or all of the above.

There was that one year Jones Soda Co. came out with liquid versions of turkey and gravy, green bean casserole and so on. The sodas live on in Internet history as one of the 10 worst drink ideas ever.

On the other hand, Thanksgiving-flavored gelato is a challenge worth pursuing, at least to Spiaggia pastry chef Melanie Diamond-Manlusoc.

Diners can decide whether or not they agree on Thursday during an all-gelato (and sorbet) dinner at Cafe Spiaggia, 980 N. Michigan Ave.

If you're having a hard time wrapping your head around the idea, here's Diamond-Manlusoc explaining her turkey gelato:

"I used five turkey legs and asked Joe, our chef de cuisine, to smoke them for me. So he brined them overnight and smoked them in the smoker. And the following day, I took the legs and cut all the meat up into small pieces. I kept the bone and submerged all of it in milk, and heated that up and then let it sit and infuse for a while. After that, I strained it. You're left with what looks like gravy. And you taste the milk, and it tastes like turkey. At that point, you make the ice cream base like normal."

And after some churning ... gelato.

"I had the other chefs taste it and people were like, 'Oh my God, it tastes just like turkey,' " Diamond-Manlusoc said. She'll serve it with Italian wafer cookies called pizzelle, which she flavored with sage to mimic stuffing.

"It sits on a bed of French's fried onions, and there's a few on top as well," she said.

The idea for the dinner came about three years ago when Diamond-Manlusoc was doing monthly gelato pop-up dinners out of her living room. She kept each dinner to a theme and when November came along, a Thanksgiving one seemed natural.

Diamond-Manlusoc, who started at Spiaggia in June, pitched the idea to her boss, chef and owner Tony Mantuano, and got no pushback.

Sommelier Rachael Lowe has paired each course with wine.

Diamond-Manlusoc said people will leave satiated but not stuffed, unlike the typical Thanksgiving experience.

"It's not going to be a thing where you're like, 'Oh my God, I can't eat another bite.' Nobody needs to eat a huge scoop of turkey gelato," she said.

The ticketed dinner begins at 5:30 p.m. with cocktails and charcuterie to start.

Seats remain for the event, which costs $50 — 30 bucks less than the white truffle upcharge at Spiaggia.