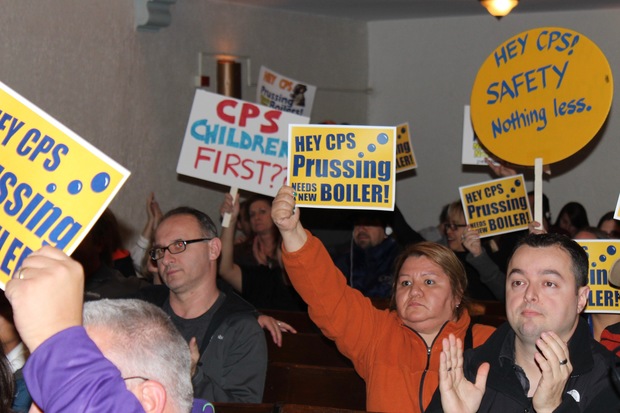 Many parents waved signs and placards throughout the meeting to signal their dissatisfaction with Chicago Public Schools' officials response to the carbon monoxide leak. [DNAinfo/Heather Cherone]

A "cascading" series of mistakes and equipment failures caused poisonous fumes to spew from the Jefferson Park school's boiler, Claypool said at the meeting of the Prussing Local School Council. The part of the boiler that malfunctioned has been repaired, and the school is safe, he added.

Claypool — and other top CPS officials — were repeatedly berated by incensed parents of Prussing students for putting their children at risk by trying to save money by not replacing the nearly 100-year-old boiler that has been the subject of a litany of complaints dating back to 2013.

At the start of the meeting, Local School Council president Michele Rodriguez Taylor said all trust between parents of Prussing students and district officials had been lost.

"You disrespected us," Rodriguez Taylor said. "You kept us in the dark. Parents remain consumed with fear." 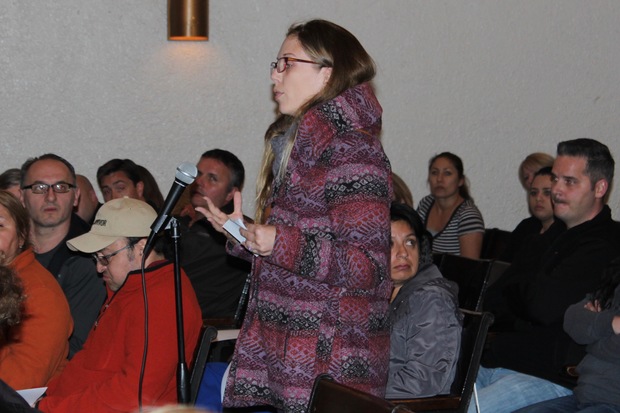 Lisa Delancey was one of many parents who said they feared for their children's safety. [DNAinfo/Heather Cherone]

Lisa Delancey, whose daughter is in kindergarten at the Jefferson Park school, told Claypool that she has been consumed by "what if" questions in the more than two weeks since the leak.

"You were this close to killing our children," Delancey said. "I don't think you are taking this seriously enough."

CPS officials said the part of the boiler that failed — the gas regulator — had been replaced. Fire doors that should have been closed to prevent carbon monoxide from seeping into the building at 4650 N. Menard Ave. were open at the time of the incident, and doors designed to let in fresh air to disperse a carbon monoxide leak were closed, although they should have been open.

"It wasn't one thing that went wrong," Claypool said.

The fire doors have been replaced, Claypool said. 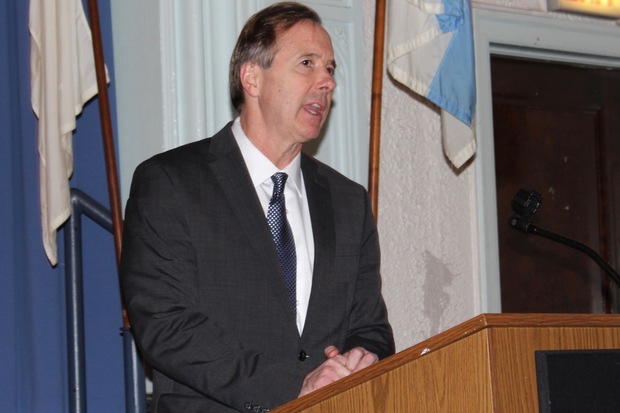 In addition, while the carbon monoxide detector in the boiler room was working, it was unplugged on the morning of Oct. 30, when the boiler malfunctioned, said CPS Chief Administrative Officer Jose Alfonso de Hoyos-Acosta.

The engineer on duty Oct. 30, who was suspended without pay after the incident, is expected to be terminated Wednesday, De Hoyos-Acosta said.

Prussing's website identifies the school's engineer as Patrick Kelly. News of his imminent firing drew gasps and jeers from the audience, many of whom waved signs and placards denouncing CPS' response to the carbon monoxide leak throughout the meeting.

One man shouted "fall guy" and another shouted "scapegoat" before Local School Council member Phil Huckelberry said many Prussing parents considered Kelly a hero for going into the building after the leak had been discovered to shut down the boiler and open windows.

Additional repairs to the school's heating system are underway and will be completed by Dec. 1, said CPS Chief Facilities Officer Paul Osland.

The boiler is a "solid, solid piece of equipment" that does not need to be replaced, De Hoyos-Acosta said.

It would cost "millions and millions of dollars" that the financially strapped district does not have to replace the school's heating system, Osland said.

In the "near term," an engineer will be assigned to the school five days a week, Osland said.

Local School Council members have asked that a full-time engineer be assigned to the school until the boiler is replaced.

Most schools have an engineer on duty only three days a week, which district officials have said is sufficient.

Several parents asked Claypool to install one in each classroom — something many teachers have done, footing the bill themselves.

More than 5,000 carbon monoxide detectors will be installed in schools across Chicago by Dec. 1, one of several changes in CPS policies that will be made after a two-week investigation of the incident at Prussing, Claypool said.

"We have learned a valuable lesson," Claypool said.

Paramedics will be required to inform the city's Office of Emergency Management and Communications of each student's name and what hospital he or she is being taken to, Santiago said. That way, officials can give parents accurate information about their child's location, he said.

An effort to create a digital patient-tracking system withe scannable bracelets to ensure that the location of all patients treated by fire department paramedics is constantly available is in the works, Santiago said.

Some parents said they waited for hours at Smyser Elementary School in Portage Park, where uninjured students were taken, to pick up their children, only to find out they were still at Prussing Elementary School.

Other parents said they were sent to the wrong hospital to find their son or daughter, leaving them unattended for hours.

"Far too much time elapsed between the incident and when parents were notified of where their children were,” Claypool said. “If I were a parent of a student here, I would have been enraged.”

Several lawsuits have already been filed against the CPS in connection with the incident.