DOWNTOWN — A group of Michigan Avenue office buildings are circulating a petition against Chicago's "bucket boys," aiming to build enough support to force the familiar street performers somewhere else.

Titan Security Group, 200 S. Michigan Ave., sent an e-mail last week asking those who work in the tower to sign the petition addressing "the noise in the 100-300 blocks of South Michigan Avenue."

"Many of you have reached out to the building regarding the disruption that the bucket boys/street performers have been causing to your businesses," said the Titan e-mail obtained by DNAinfo Chicago. "We would like to show the amount of support behind removing the performers on this stretch of Michigan."

A Chicago staple that traces its origins to Bronzeville's Robert Taylor Homes in the mid-1990s, the bucket boys are now a common sight throughout the Loop. For those who don't know, the bucket boys are what they sound like: young men who sit at prominent corners and play drum beats on plastic buckets for tips. They're known for their coordinated routines, fancy stick work and penchant for gathering crowds.

One of those boys is Torrence Penn, an Englewood resident who was beating a bucket mid-day Friday at Michigan Avenue and Adams Street. Penn, 22, said he makes an average of $200 a day performing at popular tourist corners such as the one he was posted at last week near the Art Institute of Chicago.

Penn, who's been playing Downtown for about eight years, also said he and his fellow bucket boys are no strangers to police tickets and other scrutiny.

"We get lots of tickets, we also get locked up," Penn said. "It's bogus. I'm just trying to make some money."

Jonathan and Rodney Howard, two brothers from Altgeld Gardens on the far Southeast Side, have also played buckets Downtown for years. They say most passersby "love" their beats, but not necessarily those who work nearby.

"The workers don't get to see us, they just hear us," said Rodney Howard, 23.

It's unknown how many signatures the petition has collected. Edgar Castro, Titan's director of security who sent the e-mail, did not return messages seeking comment. At least one institution in the petition's circulation area, the Chicago Symphony Orchestra at 220 S. Michigan Ave., said it did not receive or sign the petition, which simply says "sign our petition to remove the bucket boys from South Michigan Avenue." 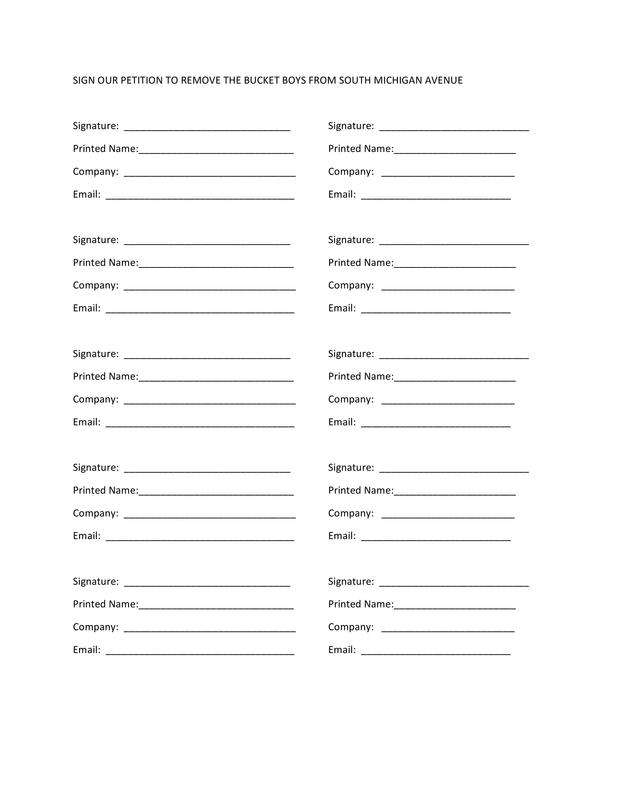 A blank copy of the petition attached to Castro's e-mail. [Titan Security Group]

According to Castro's e-mail, the signatures will be sent to Ald. Brendan Reilly (42nd), whose ward covers the Michigan Avenue stretch and who in 2009 introduced a measure cracking down on street performers who repeatedly break the city's noise ordinance. Reilly did not return a message Friday.

The latest campaign saddens Merci Carmichael, a South Shore resident who in 2009 began managing a group of bucket boys who now play corporate events and Chicago Bulls games. She said getting licenses is already hard for the boys, many of whom are teenagers and not legal adults. Otherwise, she said the bucket boys are just misunderstood.

"No matter where they are, groups of people will stop and pay attention for minutes on end," Carmichael said. "That's intense power, and a strong piece of culture in the city."