UPTOWN — More than 50 advocates of the homeless marched on the home of Ald. James Cappleman (46th) Monday night, accusing him of trying to "force poor people out of the ward."

But Cappleman said in response that he shares many of the homeless activists' concerns and complained that the city's "short-term" approach does not get to the root causes of the problem.

"They're angry. I don't blame them," the alderman told reporters of the protesters.

Protester Leterror McDade, 54, who has been homeless in Uptown for nearly a decade, said,  "When they tore down the projects they promised to build affordable housing. I've been on a housing list for 10 years. All I want is some place to live. That's all."

McDade was among those who brought their fight to "stop criminalization of the homeless" to the Cappleman's house. 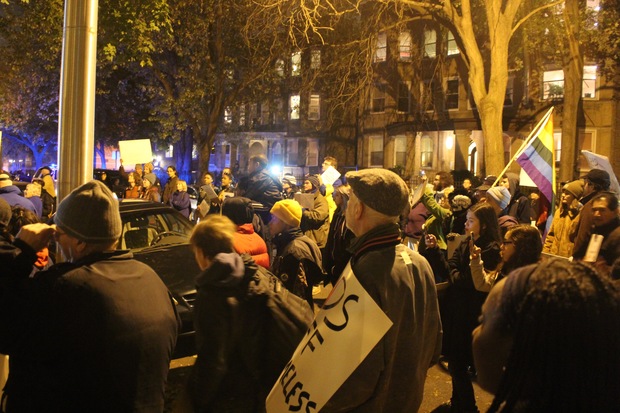 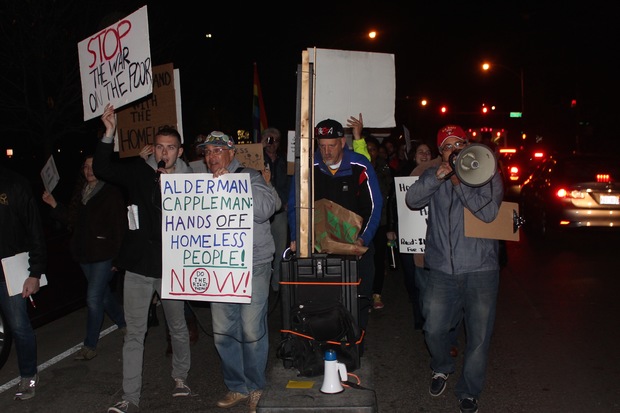 Activist marched through the streets to the home of Ald. James Cappleman (48th) Monday night to find answers for the mistreatment of homeless in Uptown. [DNAinfo/Josh McGhee]

Activists citing the clearing of homeless people and their belongings from the viaducts along Wilson Avenue and Lawrence Avenue — an ongoing battle that started ahead of a Mumford and Sons concert at Cricket Hill this summer — marched through the streets to Cappleman's home. Advocates said Cappleman was responsible for "a multipronged effort to force poor people out of the ward and 'ethnically cleanse' it... for wealthy real estate developers," according to a news release for the protest.

An organizer of the protest, Ryne Poelker, of the group Uptown Uprising, said, "Since police and Alderman Cappleman have brought these issues to where the homeless and most vulnerable sleep, we have decided to bring it back to where Alderman Cappleman sleeps."

"These people who are sleeping out here just want peace," Poelker, 24, told media as the group gathered at the corner of Wilson and Clarendon avenues. "I've seen displacement for years in the area. It's part of a coordinated effort to push low- and middle-class people out of the neighborhood."

Activists cited multiple complaints against Cappleman, including what they claim was his support of closing low-cost housing options such as single room occupancy dwellings. They also complained that he sided with Mayor Rahm Emanuel to close half of the city's mental health clinics when he voted for Emanuel's first budget.

Cappleman, they said in a release, advocated to use public funds "to subsidize commercial and residential developments for the wealthy," supported the selling off of public assets such as "Stewart School "for luxury developments" and noted his request of the Salvation Army to stop using its outreach trucks to serve meals to the homeless in Uptown.

Around 6 p.m., the protest headed west on Wilson Avenue, north on Sheridan Road winding through the neighborhood to the gates outside Cappleman's home. When protesters realized the alderman was not home, they took their fight to the the alderman's office at 4544 N. Broadway.

A news release from Cappleman, distributed to reporters at his office Monday night, told protesters that he would not be home and encouraged them to voice their concerns at Ward Night, which he holds every Monday from 5-7 p.m.

"I share many of the protesters' concern about the impact of the police sweeps on our homeless neighbors. Primarily, the sweeps are a short term tactic that do not address the underlying cause of widespread homelessness — a lack of access to safe, clean, affordable housing in our community," Cappleman said via the release.

Cappleman's release said he has worked with ONE Northside and the Jane Addams Senior Caucus to save over a hundred affordable units, owned by Presbyterian Homes, ensuring the ward does not lose "our current affordable housing."

In September, about 100 low-income seniors at Crowder Place were given until November 2016 to find a new home after Presbyterian Homes announced the closing of the facility and two others like it. At the time, Cappleman called the closing "absurd" and said he was "shocked" to learn the units would be sold to market-rate developers. 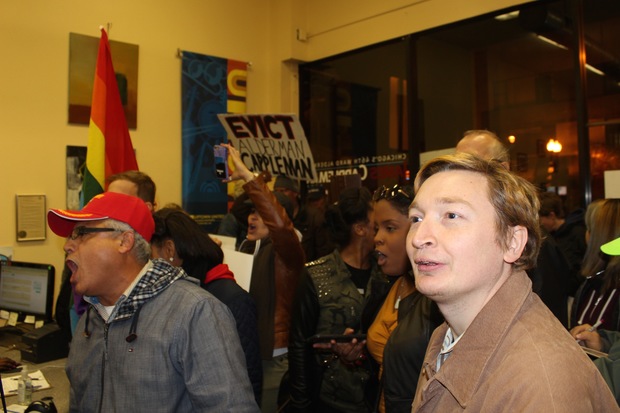 When Ald. James Cappleman (46th) wasn't home protesters headed to his officer, where they were welcomed in. [DNAinfo/Josh McGhee]

When protesters arrived at Cappleman's office, they were welcomed in by the alderman. While some protesters demanded officers be punished for ticketing the homeless "illegally," the conversation quickly turned into a shouting match and the crowd was asked to leave before questions were answered.

Cappleman did offer his take on the issues to reporters after the crowd was outside saying the system "grossly failed."

"We can't have this because people are dying. It's very serious. They're angry, I don't blame them. I'm angry as well," Cappleman said.

When asked if he was telling police to kick the homeless out from the viaduct and the park, Cappleman denied any involvement saying, "It's not true. It never happened."

"As far as directing police, that's a police matter, that is taken up with the police and the city's law department. Alderman do not direct police. We can't," he said. 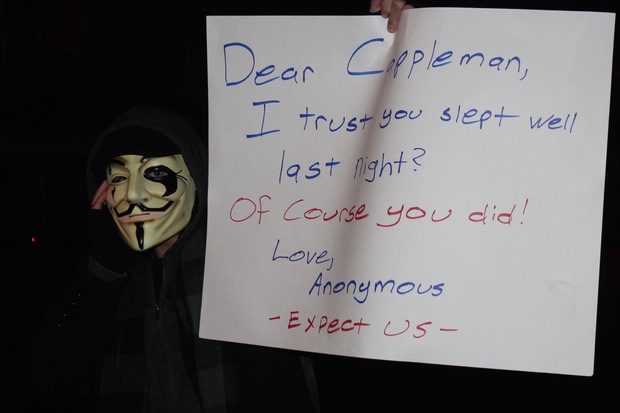 Protester McDade said that after years on the street, he just wanted somewhere to go at night to feel warm and safe. But, in a story echoed by many of the homeless living along the viaduct on Wilson Avenue, McDade said he only received one call about a housing option and then was never called again.

He acknowledged "at one time I was a criminal" but said "I haven't been in trouble for eight to nine years."

For Laura, who's lived under a viaduct off and on for a few months, it's hard to see Cappleman as an advocate for the homeless, especially after his support for Chicago Public Schools decision to sell the former Stewart School Building to upscale developers for $5.1 million, missing what she called a golden opportunity to provide more affordable housing in the ward.

The site will be redeveloped to include a playground, a community plaza, retail and restaurant space, along with residential housing. Whether the building will include affordable housing or not has not been revealed.

"What about the homeless people?" asked Laura. "There's people [out here] that don't need to die, especially the children. I don't want to see anymore people die in the streets... freezing to death."