RIVER NORTH — A private club for people into bondage and other kinks wants to open in River North, raising eyebrows from those who live nearby.

Galleria Domain 2, which currently operates a North Side club, this week posted a public notice for a new fetish lounge it wants to open at 356 W. Superior St. 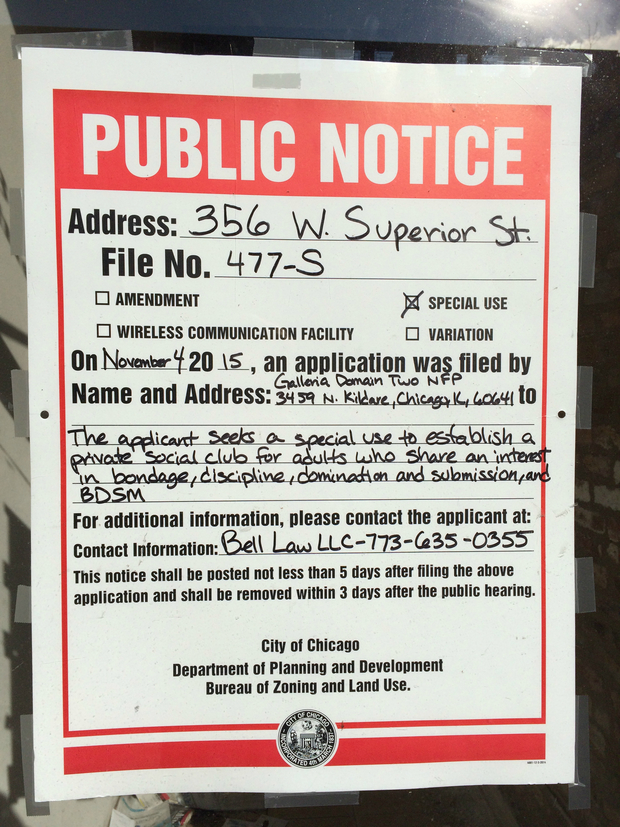 The notice immediately drew alarm from some neighbors, who are now organizing an effort against the club, said Amanda Cespedes, who lives nearby with her husband and 7-month-old daughter. Cespedes said neighbors are emailing each other on their next steps, including possibly lobbying Ald. Brendan Reilly (42nd) to prevent the club from opening on their block.

"It’s not like we live in a dark alley or something. That’s the kind of place where I assume you wouldn’t want people to see you going in and out," Cespedes said. "Any person in any neighborhood across the country would not want a sex club across the street from their home."

Dave Matthews discusses why some neighbors are concerned:

HERE'S A PEEK AT GALLERIA DOMAIN 2'S RULES, INCLUDING THE SAFEWORD, WHICH IS 'SAFEWORD'

"We believe that the full expression of human sexuality by adults provides opportunities for experiencing pleasure and joy, creating and developing intimacy, promoting spiritual growth, and finding and sustaining fulfilling interpersonal relationships," according to the website.

Peter Strazzabosco, a spokesman for the city's department of planning and development, said a public hearing will be held on the club, but the meeting has yet to be scheduled and won't occur until the first quarter of next year at the earliest. Aside from neighborhood input, the city will consider whether the proposed club "is in the interest of the public convenience and will not have a significant adverse impact on the general welfare of the neighborhood or community," is compatible with the neighborhood's character, and other factors.

The club would open on the second floor of the building, which sits next to a condo tower and also includes a car wash. Cook County property records show the building is owned by Skokie investor Daniella Zipperstein, who said "everything was fine" when the prospective tenant came to her to sign a lease. When asked if Galleria Domain 2 told her what kind of club it was, she said "I'm not American so this means nothing to me."

"They told me it was a private club, not necessarily [a] sex club, if it's a private club, it's OK with me," she said. "I understand if [people] don't want it in [their] neighborhood, but it's not up to me. If the city won't give them a license, that has nothing to do with me."