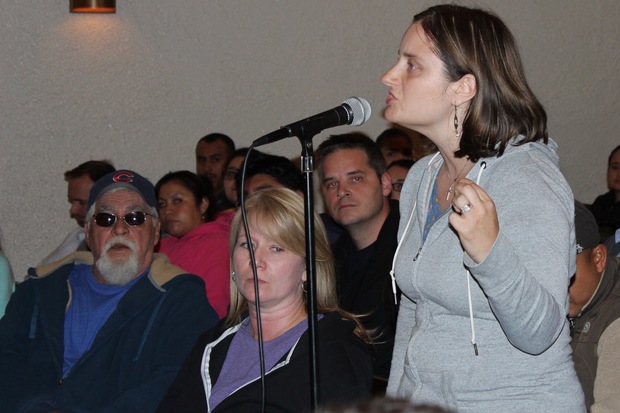 Michelle Netterstrom, whose three children attend Prussing, said she feared her children were dead Friday morning after a carbon monoxide leak forced the school to be evacuated. [DNAinfo/Heather Cherone]

Several parents broke down in tears at the emergency meeting of the Prussing Local School Council as they recounted learning that their children had been hospitalized after breathing in the poisonous fumes that spewed from the school's boiler when it malfunctioned.

Two mothers of preschool students said their children inhaled so much of the gas that they became mentally confused and could not identify themselves or recognize their mothers.

Michelle Netterstrom, whose three children attend the Jefferson Park school, demanded that CPS Executive Director of Facilities Leslie Norgren look her in the eye while she described fearing that her two sons and daughter were dead while waiting outside the school Friday morning.

"This boiler should have been replaced yesterday," she shouted, prompting loud cheers and applause.

Anna Alvarado, the CPS chief of schools for the Far Northwest Side, said the district was working hard "to get to the bottom of what happened Friday morning" and prevent it from happening again.

"We failed your children," Alvarado said, adding that the district had not lived up to its goal of putting students first. "I know that's what you are all thinking, and you are right. We put your children in danger."

Local School Council president Michele Rodriguez Taylor said the boiler has been in disrepair since January 2013, when the first in a litany of complaints was made to district officials about its poor condition.

"Many of us are angry," Rodriguez Taylor said. "And we have every right to be."

The boiler passed its annual inspection on July 22, a district spokesman said.

On Sept. 11, Prussing failed an inspection by city officials because of the boiler, and Principal George Chipain asked district officials to replace the school's heating system.

The council also requested that district officials assign an engineer to the school at 4650 N. Menard Ave. five days a week to monitor the boiler. An engineer is now on duty at Prussing only on Mondays, Wednesdays and Fridays, Chipain said.

While CPS officials at the meeting said they would inform CEO Forrest Claypool of the Local School Council's request for a new boiler, many parents said that response was unacceptable.

Phil Huckelberry, a member of the council, said Claypool should have attended the meeting himself, rather than sending representatives, a remark that drew loud applause.

Members of the council vowed to petition the Chicago Board of Education at its Nov. 18 meeting if officials do not agree this week to replace the boiler.

Some parents said they would not send their students to school until the boiler is replaced, fearing for their safety.

Ald. John Arena, whose 45th Ward includes Prussing, said he would not have allowed the school to reopen if he was not confident that the boiler had been repaired and was now in good working condition. He also promised to push CPS officials to find the money to replace the boiler, which he said was 100 years old.

District officials said all who had been sickened by the carbon monoxide leak had recovered. The symptoms of carbon monoxide poisoning include headaches, weakness, dizziness, nausea vomiting, shortness of breath, confusion, blurred vision and loss of consciousness.

While Chicago Fire Department officials reported that 71 students and seven adults were taken to the hospital, Chipain said his records showed 80 students had been hospitalized along with nine staff members.

Several parents said Monday night they took their children to the hospital Friday afternoon and evening after they developed symptoms of carbon monoxide poisoning.

Other parents said they were frustrated and angry by the lack of communication — or confusing messages — from school and district officials.

Some parents said they waited for hours at Smyser Elementary School in Portage Park, where uninjured students were taken, to pick up their children, only to find out they were still at Prussing Elementary School.

Parents with medical bills stemming from the incident should contact the school for information about how to file a claim with the district, Chipain said.