LOGAN SQUARE — The 606 is getting its first bike shop right alongside the trail.

The location could not be any more perfect, according to the owners of BlackCAT1, which is set to open this week.

The ramp from the 606 at California rolls directly to the front door at 1803 N. California Ave. The location is also on a bustling north-south bike route that's used by many commuters, California Avenue.

"If we didn't do it, someone else would have," said co-owner Josh Korby, a 37-year-old Noble Square resident who rides to work every morning on the trail.

Paul Biasco says the spot will include a full service mechanic shop:

Even while the shop has been under construction over the past few weeks, potential customers have been peering into the windows non-stop. There's already been a lot of people with flats and other fixes who have been banging on the door day and night.

"It's mind boggling,"  Russell Boehringer, a 38-year-old Logan Square resident and co-owner of the shop. "We are right in the middle of [The 606]."

"When it's warm out, it's jumpin'," Boehringer said. 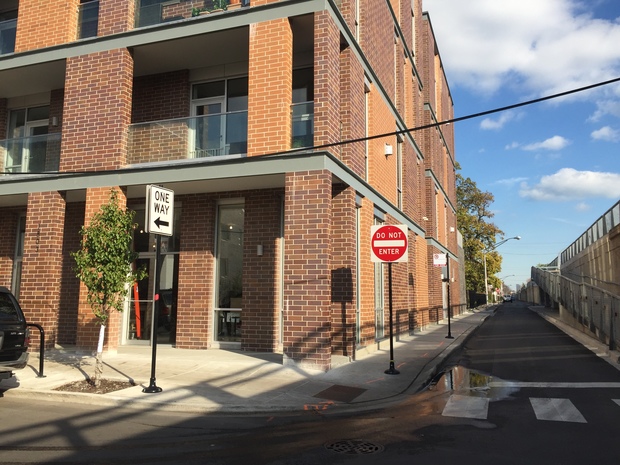 BlackCAT1, while a full service shop, focus on commuters, as that's what the owners know best. The owners opened the first BlackCAT1 shop at Chicago and Sacramento about a year ago, but the new digs are a big step up in terms of size and what they will be able to offer. The name refers to the different categories of bike races, with CAT1 being the highest level of competition.

Boehringer and co-founder Korby are both former bike couriers and have a combined 15 years' experience speeding through the street delivering packages. Korby is one of the founders of the Four Star Courier Collective and had worked in the courier business for about 12 years.

BlackCAT1 is set to open later this week and will include a full service mechanic shop, a selection of complete bikes, parts and accessories.

The owners of the spacious shop also hope to be able to host events in the space.

"In a lot of bike shops there's really nowhere for customers to go," Boehringer said.

"We want people to want to hang out here," Korby added.