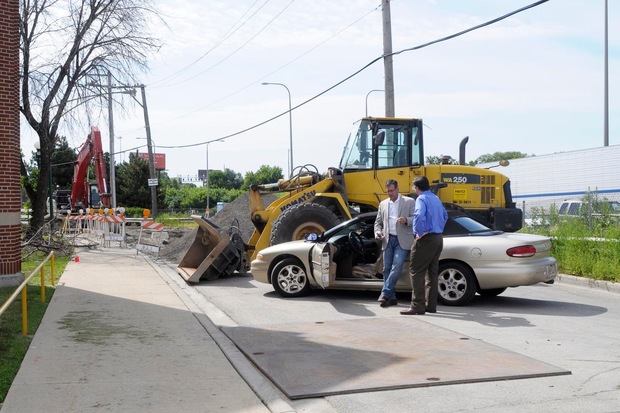 JEFFERSON PARK — City officials should scrap a plan to make Wilson Avenue one-way in Jefferson Park near the Edens Expressway to allow a massive electronic billboard to be built in the middle of the road, residents said Wednesday night.

Ald. John Arena (45th) called it an "epic failure" for the city to promise — in a 2012 law — to build an electronic billboard on the front lawn of the Mayfair Pumping Station without realizing that the construction would damage the underground infrastructure used to pump water for more than a million residents.

City crews began tearing up Wilson Avenue at Lamon Avenue in July to make way for the billboard, angering Arena, who said the work began without his office — or nearby residents — being informed. The project was put on hold when Arena used his car to block construction crews, drawing widespread media attention.

While a city spokesman said in July the decision to permanently close Wilson at Lamon was "designed to enhance safety" near the Mayfair Pumping Station, where there is "a history of excessive speeding," city traffic officials said instead Wednesday night they had no choice but to close the road — at least partially — to meet the city's obligation to install the massive electronic billboard.

Maureen West, a project manager at the Chicago Department of Transportation, said city officials had heard residents’ objections to the complete closure of the road “loud and clear and tried to develop a compromise.”

Many residents said the route was a crucial shortcut used by residents to get around the typically gridlocked intersection of Lawrence and Cicero avenues. 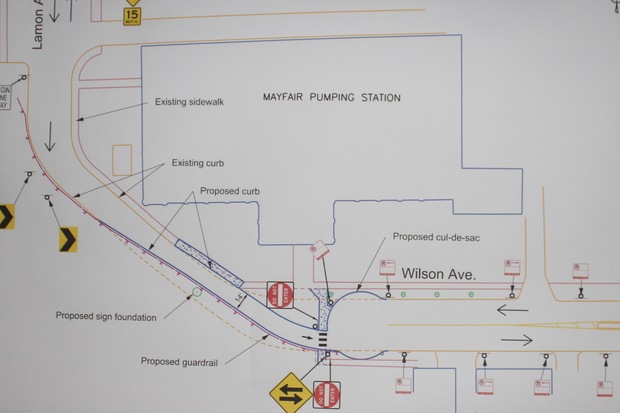 Plans for a billboard on what is now Wilson Avenue were roundly criticized Wednesday night by Jefferson Park residents. [DNAinfo/Heather Cherone]

Those who attended the meeting called that plan no solution at all, saying it would make traffic worse near their homes by gridlocking traffic, reducing their property values and endangering their children by forcing impatient drivers down side streets and alleys to avoid bumper-to-bumper traffic.

Gary Hudson, who lives near the proposed billboard, said he was unwilling to “pay for the city’s mistake” in promising to build a billboard somewhere that was not feasible.

“You are asking us to sacrifice because someone didn’t do due diligence,” Hudson said. “I’m not willing to do that.”

Arena — who said he engaged in a necessary act of “civil disobedience” to halt the project — said he was obligated to enforce the law as passed by the City Council, even though he voted against it and objected to the location of four electronic billboards in his ward.

Timothy Eischen, who lives near the proposed billboard, said it was clear the alderman was between a “rock and a hard place,” as Arena nodded his head.

“It is mind-boggling and ludicrous that we are going to rip up a street for a billboard that none of us want,” Eischen said.

The agreement to build 60 signs in 34 locations is worth at least $150 million during the 20-year life of the agreement and perhaps more based on advertising rates, said Colleen Stone, the city’s digital billboard network project manager.

The billboard set to be installed at Wilson and Lamon avenues would add at least $2 million to the city’s bottom line, Stone said.

While city officials said Wednesday they had considered dozens of other possible locations for the billboard, the only feasible option is to build it in the road. If built farther east, the billboard would violate state law for being too close to another electronic billboard, officials said.

But Arena said he would ask officials to consider several sites suggested by residents at the meeting, including property recently bought by the city at 4808 W. Wilson Ave. where portable toilets were once stored and manufactured.

That property is set to become the new home of the 45th Ward's Streets and Sanitation operations, Arena said.

In addition, several residents said the billboard should be built along the triangular piece of property that a homeowners’ association tried unsuccessfully to lease to a billboard firm several years ago.

“We will examine all of the options,” Arena said. “This isn’t over yet.”