STREETERVILLE — A key owner of the John Hancock Center hopes a beaming sculpture can shine new light on the skyscraper's plaza along the Magnificent Mile.

Stephen Hearn of Chicago-based Hearn Co., which owns the Hancock tower's office space and parking garage, on Monday night unveiled his vision for a revamped Hancock plaza, saying it's "not particularly" inviting or attractive today.

Hearn's plan calls for removing the "Spanish steps" down to the plaza, adding more tables and chairs, as well as an elevator and a video screen. But the plaza's new centerpiece would be a 39-foot-tall, oval-shaped cluster of prisms that would host events, reflect sunlight, and possibly be lit up at night. 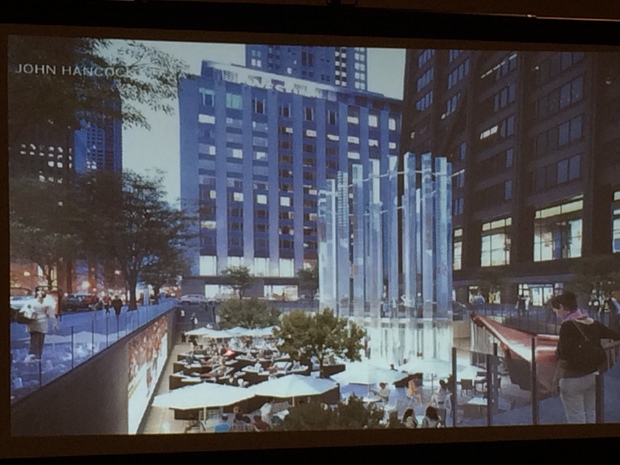 A rendering of the prism at dusk. [Skidmore Owings & Merrill]

"[The plaza] needs to be an iconic space in front of an iconic property, and we'll make it better," Hearn said. "We're trying to create as much excitement as there is for the building itself and bring people up to this destination."

Designed by architect Brian Lee of Skidmore Owings & Merrill, the glassy sculpture is meant to complement but still illustrate contrast with the dark steel Hancock tower behind it, in a form Lee called "light, delicate, and almost jewel-like."

The sculpture would contain a stage at street level, as well as an area below with retractable doors. 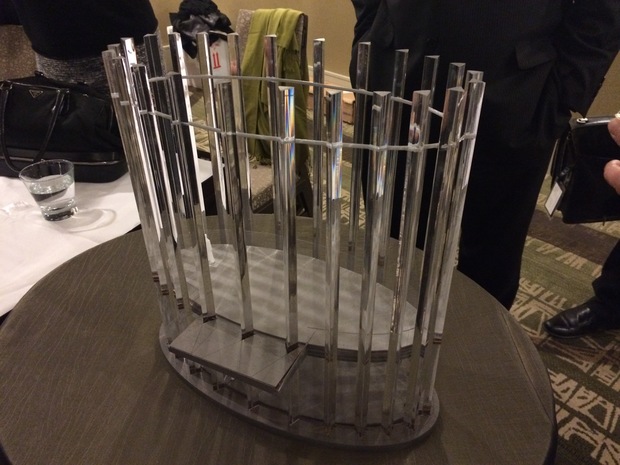 A model of the sculpture. [DNAinfo/David Matthews]

It's the latest change to the Hancock Center since a venture including Hearn acquired the property out of foreclosure two years ago. Since then, Hearn has changed out the tower's entire mechanical system and added a new sculpture to the building's lobby in a bid to attract more visitors. The company also previously proposed, then withdrew, plaza changes about two years ago.

Hearn said the new plaza project would cost about $10 million, and he would need a partner to finance it. He doesn't plan to use the plaza sculpture as a recording studio, contrary to a report earlier this year. Though selling plaza naming rights could be part of the deal, Hearn said he doesn't know if he's still considering selling the naming rights for the Hancock tower itself, a move that also was previously reported.

The plaza changes would require aldermanic approval, and preservation groups and others are lobbying City Hall to grant the tower landmark status, so it remains unchanged.

Ald. Brian Hopkins (2nd), whose ward includes the tower, did not offer an opinion on the changes at Monday's meeting, but said the tower is not just a city icon but a "Streeterville symbol" that represents "Streeterville's birth as a residential community."

A straw poll conducted by Hopkins' staff at the meeting showed a slight majority of attendees in support of the changes, with many others unsure and a few opposed. 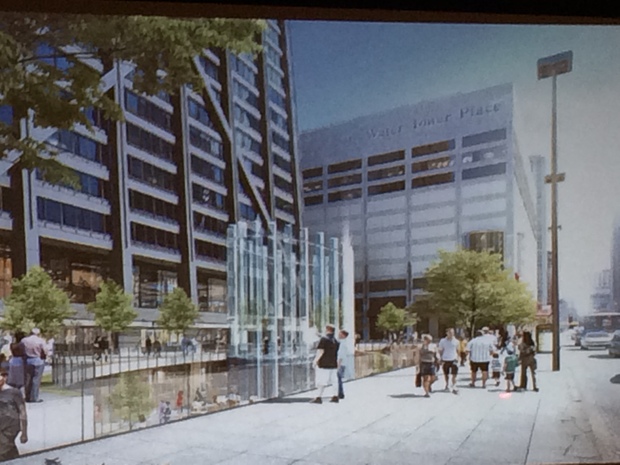 A rendering of the proposed new plaza during the day. [Skidmore Owings & Merrill]

Gail Spreen, the immediate past president of the Streeterville Organization of Active Residents group, called the Hearn proposal an "interesting" one that "fits the context" of the Hancock plaza. But she's concerned about signs and advertising taking over the proposed video screen in the plaza.

But if Hearn's goal is to bring more visitors to the tower as Millennium Park and other attractions lure tourists farther south, Spreen said Monday's proposal will do just that: bring more people into John Hancock Center.