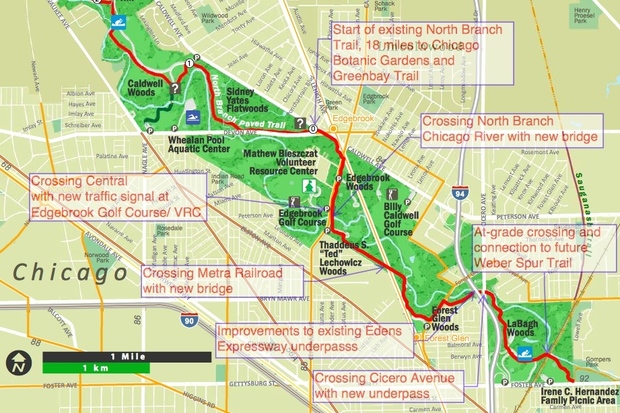 Once completed, the project would allow runners, walkers and bikers to travel 21 miles from the Lakefront Bicycle Path to the Chicago Botanic Gardens in the North Shore. [Cook County Forest Preserves]

EDGEBROOK — The three-mile extension of the North Branch Trail south from Edgebrook to Mayfair will be built in two stages because of a budget crunch, Cook County Forest Preserve officials said Thursday.

The first stage of the trail extension will stretch from Devon and Caldwell avenues to Forest Glen Avenue near the Metra station on the Milwaukee District North Line, said Lambrini Lukidis, a spokeswoman for the Cook County Forest Preserves, which is partnering with the Illinois Department of Transportation to build the trail extension.

The first stage of the trail extension — approximately 2.1 miles long — will cost $5.3 million, with the forest preserve district paying 20 percent of the cost and federal and state grants covering the rest of the tab, Lukidis said.

It is unclear whether the decision to build the trail extension in two parts will save any money, because construction firms have yet to be asked to bid to build the second stage of the trail from Forest Glen Avenue to Gompers Park in Mayfair, Lukidis said. Funding is not yet available for that part of the project, she said.

"We hope it will pay off," Lukidis said of the decision to do the work in two stages. "But we wanted to use the money we have available and get started."

Ending the first part of the trail at Forest Glen Avenue is logical, since bicyclists will be able to connect from the trail to on-street bicycle routes along Elston Avenue and travel Downtown, Lukidis said.

"Right now, that's what we can afford," Lukidis said.

Once completed, the project would allow runners, walkers and bikers to travel 21 miles from the Lakefront Bicycle Path to the Chicago Botanic Gardens in the North Shore. 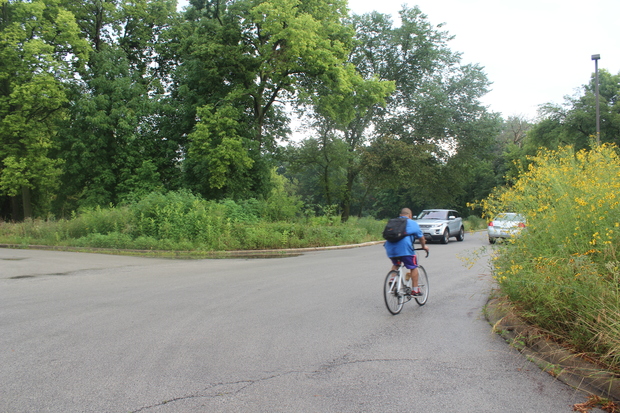 In June, forest preserve officials put plans for the off-road trail extension on hold after proposals to build the trail came in $2 million more than expected.

The trail extension — in the works since 2008 — had been expected to cost $7.7 million, with 80 percent coming from the state and federal governments and the rest coming from the forest preserve district, officials said.

The first stage is expected to take at least year to build, Lukidis said.

When it is built, the trail's alignment will not be changed in response to concerns voiced by Edgebrook residents that it will snarl traffic along Central Avenue.

A traffic signal will be installed at the forest preserve volunteer resource center, 6100 N. Central Ave., in Edgebrook, to allow the trail to cross Central Avenue and continue south.

Others objected to the trail because it will require that 425 trees be chopped down.

Almost half of those trees are dead or non-native plants that need to be removed regardless of the trail's construction, forest preserve district officials said.

The first stage of trail extension will require that a bridge be built over the Chicago River east of Central Avenue and north of Indian Road as well as a bridge over the Metra tracks near Indian Road and Ardmore Avenue.

As part of the second stage, which will end at Foster and Kostner avenues, the trail will cross the Edens Expressway via an existing underpass, which will be improved, and a new underpass will be built to allow the trail to cross Cicero north of LaBagh Woods in Forest Glen.

Once completed, the extension of the North Branch Trail could connect to a trail being built along a defunct railway known as the Weber Spur. That project is in the initial stages.